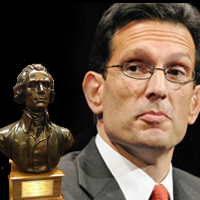 Cantor responded within hours, saying no cash changed hands, but that he received a bust of Thomas Jefferson from ALEC, pictured above. But, under House Ethics Rules this type of award can only be received by a Member of Congress if it is disclosed, which Cantor did not do. This appears to be a clear ethics violation, and we have asked the Office of Congressional Ethics to investigate. Prompted by Common Cause, Cantor has now very quietly amended his 2009 Financial Disclosure Report to include the ALEC gift. He also amended his 2010 report to include another bust given to him by the Associated Builders and Contractors trade group. We had no idea about this second award, but now we do.

Cantor's relationship with ALEC really does matter. They are a highly prominent lobby group, with a clear and unambiguous agenda to advance their corporate funder's interests, which includes advocating for Congressional action. So they actively seek the ear of leading politicians like Cantor, hoping that he will go to bat for them (and their corporate clients) in Congress. Of course Cantor knows why ALEC courts him, and although I am positive he would say he listens to all sides before making policy decisions, ultimately only an informed electorate can decide how much influence ALEC has on elected officials -- which is why these public disclosures are so important!

So what about ALEC's role in this? They too responded to our questions, saying they were just complying with IRS requirements to report the cash value of a plaque or a bust. "Nothing to see here..." But this response raises more questions, of which here are just two:

I absolutely detest government corruption. Blagojevich got busted for "pay to play" schemes and was sentenced to 14 years in the pokey. William Jefferson was Louisiana's congressman who got sentenced for 13 years for bribery, which included a freezer full of "cold" hard cash. Chris Dodd got a "Friends of Mozilo" loan at less than market rate. This kind of stuff makes me puke. However, Cantor received a bust of Thomas Jefferson - and you pump it up to sound like he got caught with a freezer full of cash. Cantor is a Virginia congressman; Jefferson lived in Virginia and founded the University of Virginia. The bust is a mass-produced bust that towers a full 16" tall - on the pedestal. Hundreds like it are available on ebay for less than $50! ALEC is fair game for your articles. Why did ALEC report the gift as cash? Good Question. Why did ALEC report a $50 bust as valued at over a thousand dollars? Another good question. But requesting a full blown ethics investigation over a $50 bust is a little over the top. If you "cry wolf!" enough times, pretty soon readers don't believe you.
Hold everyone accountable that breaks the law. The powerless is prosecuted to the fullest extinct of the law.