President Obama visited Wisconsin today to speak at Master Lock, a union firm that that has brought 100 manufacturing jobs back from China to the United States. Because it was the President's first visit to the state since the historic fight over collective bargaining broke out over one year ago, everyone was watching to see if he would address the controversy or signal his support. Some saw signals where none were intended.

In his barnstorming speech, the President called for tax cuts for American manufacturers and higher taxes for companies that move jobs overseas. He stood before the American flag and the blue Wisconsin flag, which portrays working men of old -- a sailor and a miner below a busy badger. Emblazoned across the bottom is the year of the state's founding, 1848. Yet, reporting on the speech, Politico reporter Donovan Slack wrote, "Behind the stage where he will speak today are two flags: an American one, as usual, and right alongside it -- and just as large -- a flag for the local union, Wisconsin 1848."

"The President has been mum in recent months on the battle raging in the Badger State between unions and Republican Gov. Scott Walker," he continued. But Slack saw the presence of the "union" flag as definite evidence concerning Obama's feelings. "It's very clear what side President Obama is on here in Wisconsin," writes Slack.

The story, which was released at 12:02 PM ET on Politico.com, and can be seen below, has since been removed. Oops. 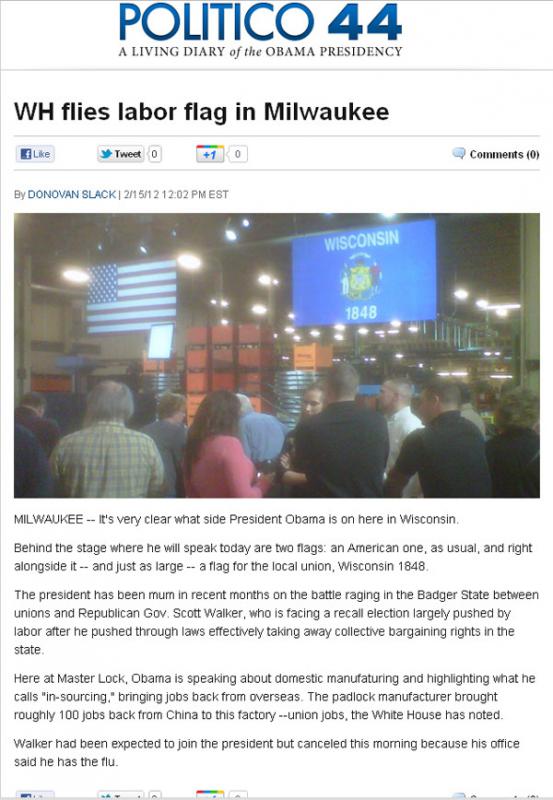