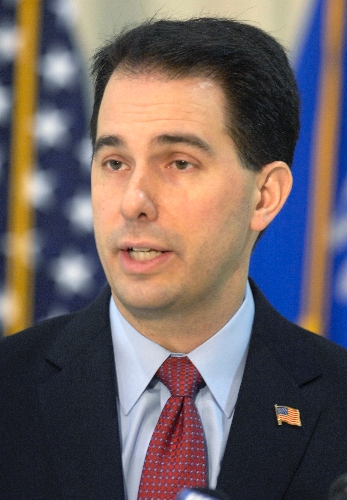 The morning after his "State of the State" address where Governor Scott Walker reassured Wisconsin "We are turning things around. We are heading in the right direction," the Milwaukee County District Attorney charged two more Walker staffers with multiple felony and misdemeanor counts of misconduct in public office.

Darlene Wink and Kelly Rindfleisch were charged with conducting partisan campaign work while on the public payroll. The alleged crimes took place while Walker was Milwaukee County Executive and running to be governor. These charges are no joke in the state of Wisconsin, where in 2005, two Senate Democrats and the Republican Assembly Speaker were sentenced to jail time for similar crimes in an episode dubbed "the Caucus Scandal."

This time, Milwaukee County District Attorney John Chisholm is in charge of a secret "John Doe" investigation where he can compel testimony under oath and every person involved is subject to a gag order. Chisholm has used this process in the past to jail Democrats for similar misconduct in office.

If you are keeping count, these are the second set of charges against Walker aides. Earlier this month, Walker’s former county Housing Director Tim Russell and his top county veteran official were both arrested and charged with embezzling more than $60,000 in charitable contributions intended for veterans. Phone records retrieved from the investigation also led to charges against Russell’s boyfriend for child enticement.

There is no end in sight for this multifaceted investigation.

The whole scandal broke into the open when the Milwaukee Journal Sentinel reported that Darlene Wink, a low-level constituent services coordinator, was caught Facebooking nasty comments about Walker’s democratic campaign opponents while working at her county job. Reporter Dan Bice, who was tipped off about the on-line activity, interviewed Wink, but wasn't sure how big of a deal it was until he was called by the Walker team a few hours later and told she had resigned.

Now we know from the indictments that the activity went far beyond Facebook. Investigators found boxes for two wireless routers in an armoire in Walker’s County Executive office. Packaging labels found with the boxes bore the name "Timothy Russell."

The allegation is that Russell set up an unofficial networking system so that staffers could conduct campaign business on their personal laptops while their salaries were being paid by the taxpayers. The secret email system was available for use by certain staff for both official and unofficial business. Its existence was "never disclosed to county employees outside a closely held group within the Walker administration," says the indictments (available here). On county time, the staffers allegedly communicated extensively with Walker campaign staff, organized fundraisers, made invitations, exchanged fundraising lists and sent out campaign press releases.

The indictments include dozens of telling emails and chat sessions with county and campaign staff about political activities. In a chat session with Russell, Wink explicitly inquired about how to delete and destroy documents. She asked Russell: "How do I get rid of the PDF from my IM?" "I don't want to go to jail for this, ha ha."

After the story about Wink’s activities was printed in the Milwaukee Journal Sentinel on the morning of May 14, 2010. Walker sent the email above to Russell at 8:46 a.m. telling him simply "we cannot afford another story like this one. No one can give them any reason to do another story. That means no laptops, no websites, no time away during the work day, etc."

This week Walker said he had an explicit policy against county staff doing campaign work at the office and revealed for the first time that he had fired Wink. "Clearly if we had known anybody else had done that we would have applied the same standard," Walker told WISN Channel 12. But why the other staff, either supervising Wink or in improper communication with Wink, were not fired was not explained.

While Wink was busy organizing Walker fundraisers down the corridor from Walker’s office, Kelly Rindfleisch was organizing multiple fundraisers from a spot 20 feet away (as the map below indicates). Thousands of emails were sent by Rindfleisch from her personal laptop organizing fundraising events on behalf of Brett Davis, the Walker team's choice for the Lieutenant Governor. Davis now runs Wisconsin's Medicaid program.

Many of these emails went to people like Keith Gilkes, Walker campaign manager who went on to serve as the governor’s Chief of Staff. Gilkes was in a position to know that Kelly was supposed to be at work on county business. Others went to Cullen Werwie, who was working on Brett Davis’ campaign, but who now serves as the governor’s spokesperson. Werwie is now in the awkward position of continuing to work for the governor after taking an immunity deal from prosecutors.

The indictment reveals that Rindfleish, who worked for Walker’s campaign until last week, was in a good position to know that the behavior in which she was engaged was improper, since she worked both the Assembly and Republican Caucus during the period when illegal campaign activity was underway, and was even interviewed by the State Department of Justice agents investigating the Caucus Scandal in 2002. Walker himself served as a state legislator when the scandal broke and felony charges were issued against legislative leaders of both parties.

It is unclear what the DA has against Walker beyond the one damning email, which suggests that Walker knew about the special "laptops" in his office. However, the charge documents indicate that the investigation is ongoing and that Wink is willing to testify about "destruction of digital evidence."

In addition to destruction of evidence, there is another thread of the investigation that may result in further charges. This thread explains why "Realtor of the Year" Andrew Jensen was jailed for a day, and involves allegations of bid-rigging in the County Executive’s office.

For his part, Walker insists he is not the target of the secret John Doe and insists: "I have every confidence that when this is completed, people will see that our integrity remains intact."

The John Doe investigation is not Walker's only headache. Earlier in January, one million petitions were filed seeking his recall. An election is anticipated this summer. With a record $12 million dollars raised by Walker of largely out-of-state money, 2012 is shaping up to be a historic year in Wisconsin politics. 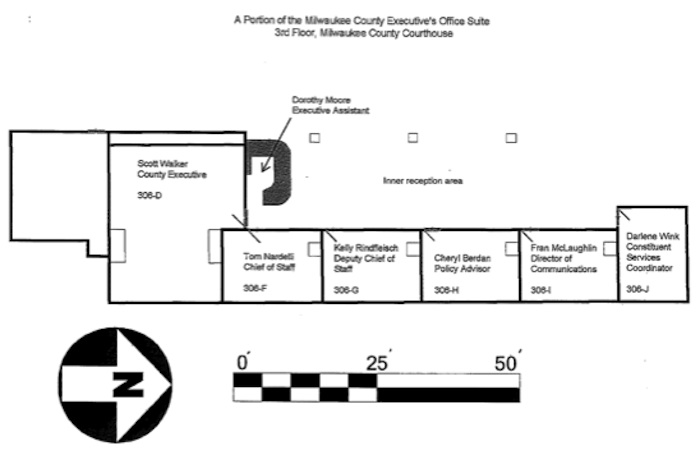 Sounds like the Cheney/Rove Administration's ILLEGAL, Republican party, private email system that was used in place of the existing, state of the art, taxpayer funded, LEGALLY required email system. You know, the one where Cheney illegally and "accidentally" lost a bunch of emails; some relating to the Valery Plame case. Just WHAT kind of "democracy" do all these rich, right-wing, corrupt corporatists have us living in? Are YOU brainwashed, too?