As Occupy Wall Street protesters and police face off in large cities and small towns across America, it is worth revisiting the positive policing relationship that was developed between protesters and law enforcement during the "original occupation" of the Wisconsin Capitol in the winter of 2011.

Gina Ray is a 20-year veteran of the Capitol Police. She worked the Governor's security detail from Governor Tommy Thompson in 1991 to Scott Walker in 2011. In March 2011, she was injured and forced to retire when she pulled an unstable young man off a Capitol balcony who was threatening to jump. Mary Bottari of the Center for Media and Democracy (CMD) interviewed Ray in October 2011, as the Occupy Wall Street movement was taking off. This is one of a series of interviews conducted by CMD and co-published with TruthOut.

CMD: Hundreds of thousands of people visited the Capitol building in the winter of 2011, and thousands slept there at night. What was your primary job during this time period?

Ray: As a veteran of the Governor's security detail, my job was to protect the Governor, his family, the Lieutenant Governor, her family and visiting dignitaries. During the Capitol protests, I was stationed at the entryway to the Governor's office.

My challenge was that thousands of protesters every day wanted to see the Governor or leave a message for him, and all these people were used to having free access to the area in front of the Governor's office. They liked to take family pictures with the metal statue of the badger behind my desk. My job was to keep things normal, and allow people be right there to drop off their messages to take pictures.

It was clear the Governor's staff would have wished them held way back, out of the hallway leading up to the security desk. I wouldn't have ever done this unless it would have been a direct order from my Chief. Even though they provided me with pens and paper for public comments, all they asked for was name, address, email address, and a short comment. That wasn't going to happen. The comments were often long and always filled with emotion. Some people cried, some people yelled at me with true abandon. They weren't yelling at me, and I knew that. They were in total disbelief about what was happening. They were desperate to be heard. Each morning my instruction was the same: "Gina, could you try to keep them to just their name, brief comment, and contact information on these sheets?" I kept saying "No," -- that I wasn't going to try to control what they had to say.

It was clear from the first that the administration was just waiting out the protesters, biding their time. They knew the bill would pass. I literally was asked multiple times a day by the protesters: "We'll he even see these?" I always answered the same way, "I can tell you that I hand them directly to the same staff people at the end of every day. They will get in there!" It became one of my missions, to make sure every person had a chance to express their views, a right guaranteed under the Constitution. This wasn't easy to maintain for 9 to 10 hours a day, but I knew that these were legal documents and I felt that it was that important.

At the end of the day, I was giving the Governor's staff thousands of these pieces of paper, thousands of comments, photos of families. Story after story about how families would be impacted by the budget bill. I couldn't believe it was happening every single day. It was gut-wrenching.

CMD: As the protests went on for many weeks, growing in size and duration, were you concerned about the Governor's safety?

Ray: Personally, I never was because they had locked down the hatch so severely. There were an amazing amount of law enforcement at every entry, every level, every floor. I had five or six state troopers with me every day from Monday, February 14th on. I was never alone, I was asked to keep people from going past the security desk, which was difficult when there were hundreds of people chanting and even more difficult when there were press conferences multiple times a day, because then people would try to sneak in who weren't really press, and the press people they wanted in, they wanted in. The press people they didn't want in, they didn't want in. And the national press began to arrive quite quickly. It became a difficult job, but because of my 20 years experience, I knew who Senators and Representatives were, who local press was, I even knew some people that were clearly regulars who had tried to see past Governors, who nobody ever wanted to see because, you know, maybe they weren't mentally stable. But then there were hundreds upon hundreds of people just like you and me who just wanted to be heard. It was a very difficult task. It really was constant until the day I left.

Ray: Yes, they were very worried. They locked down the whole area around the Governor's office and there was a great deal of fear and concern. Because of this, it just became so militant, so military, I don't understand why that happened. I mean sure, we were dealing with a few crazy people, there could have been someone with a weapon, but the fact is that can happen anywhere, anytime, no matter what you're doing. The bulk of what was happening was the people versus the governor's budget plan. There was no reason to be so military about it. I feel fortunate that it didn't go into a riot gear formation, but we were always ready for that -- there were people ready to put on riot gear, go out there, shoot tear gas, whatever.

But this simply wasn't like any other protest I'd ever seen or been around, even historically. You can't compare this to the Vietnam protests. You can't. I think many people wanted to. I think they saw some assimilation between the body of people and the fear because of the numbers, when in truth this was the most peaceful body of protestors I've ever seen, and probably will ever see. There was no need to be military about it. I do realize that the administration was very fearful, paranoid, so afraid, that for them it was an easy thing for them to do. It was an easy thing for them to just go, "They're the bad guys, this is gonna get ugly, be prepared, be ready." But it was ridiculous. It was complete overkill in my opinion. Complete overkill.

What Makes a Good Police Officer? 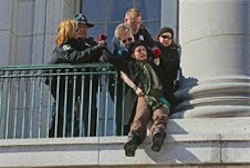 CMD: What makes for a good police officer in these stressful circumstances?

Ray: We had backup coming in from all over the state. Each day when I was given five new troopers, I'd give them this little quasi-lecture; the biggest part of my lecture was, if you don't think that you are them, then you shouldn't be standing there with me. Some got it, some didn't. The ones that didn't, didn't last long. We had to be on the same page. We all have our duty belts on, we all have brawn. But what I have in my head with 20 years of experience with people in general, if you can't sympathize and be compassionate with the folks out there, then you don't really belong up here with me.

CMD: Tell me about your boss, Capitol Police Chief Charles Tubbs. Why was he so effective keeping the peace inside the Capitol building? What did he bring to it that the other chiefs might not?

Ray: We've only had Chief Tubbs as our chief for three years and under any other former chief, this would have been an ultimate and complete, utter failure. I can't stress it enough. It would have been a disaster.

Chief Tubbs has knowledge of life that no other chief had or has. He has come from an incredibly difficult personal past. When you come from where he's come from, there is no way that you're going to let somebody tell you what to do, tell you how to run things.

He walked a beat at age 19 in Beloit, as an African-American man. He doesn't need this job, he didn't need it when he came and he didn't need it during this amazing amount of stress, and he certainly doesn't need it right now when some people are calling him and saying "I don't think you did a very good job, Chief Tubbs. We'd like to call you to task, we think you didn't protect us well enough." It's ridiculous that his critics are even getting air play. He was successful in bringing this to a peaceful conclusion, because he is very compassionate person and when he touches your hand or looks you in the eye, you know he's for real. It's very unusual for a police chief to be that honest and direct. He establishes trust with everyone he deals with.

Advice for Dealing with the Occupations

CMD: So if you were to give advice to your fellow law enforcement officers out there on how to deal with the Occupy Wall Street crowd, what would you say?

Ray: I wish they would interview cops and find out which ones are trigger happy. Which are just waiting to use that pepper spray. Which ones are just waiting to get that pot boiling. The ones that aren't are going to be successful. They are the ones who are going to be able to control the group, be it small or large. If you have someone in a leadership capacity who is compassionate, then everyone below that person acts the same way, because that's how cops are, you follow your brass and you're insubordinate if you don't. You don't want to follow the guy who says "we're gonna cuff 'em, slam 'em, spray 'em." You don't want to be behind that person.

The gun, your force continuum that you're so trained to use, that comes into play, statistically, how often in your career? Very, very infrequently. If it does it's probably gonna be really bad. You're probably gonna have to kill someone, minimally fight if they're fighting at you. But this scenario of protest, and now you're seeing all over the country now with people protesting and saying hey, "we're really hurting here" -- where is the need for police brutality, for riot gear, among these people? Where? Why? I didn't see it then and I don't see it now.

Gina tells it right! See my blog about THE MADISON METHOD at: http://improvingpolice.wordpress.com
Gina is spot-on. Violence begets violence; calm policing makes for calm protesting.
Great to hear from you. Mr. Couper, your tradition lives on!