Today, CNBC's Mad Money with Jim Cramer's "Invest in America" series will take the show to a seemingly unlikely locale. The crew will head to a place many would consider the middle of nowhere -- the state of North Dakota.

Referred to as "Kuwait on the Prairie" by The New Yorker in an April 2011 feature story and located predominately in northwest North Dakota, the shale formation possesses a vast amount of both oil and methane ("natural") gas, gathered via the notorious fracking process. Recognizing the economic opportunities that the formation would present to fossil fuel corporations, the U.S. Energy Information Administration penned a report in November 2006 titled "Technology-Based Oil and Natural Gas Plays: Shale Shock! Could There Be Billions in the Bakken?", highlighting them in some depth.

The report opens on this note:

Even more importantly in this case is the fact that CNBC is a subdivision of NBC, which is owned by General Electric (GE).

The General Electric Economic Stake in the Bakken Shale

On February 10 the Associated Press (AP) reported that GE Energy Financial Services formed a partnership with Sequel Energy LLC, which is headquarted in Denver, Colorado. 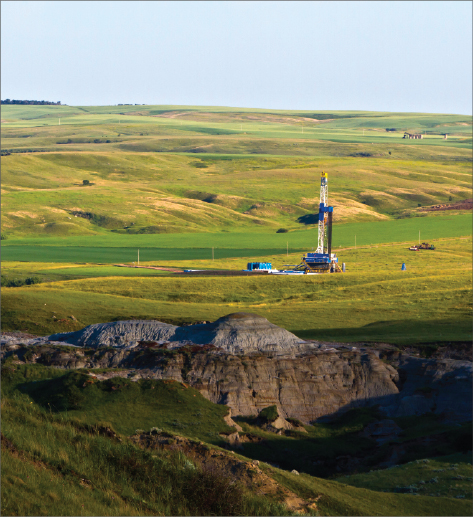 The partnership's purpose was to acquire oil and gas reserves located in the Williston Basin, where the Bakken Shale is located, from St. Mary Land & Exploration Co. for $137 million.

AP reported, "The companies declined to disclose the size of the reserves but said they are in producing fields. Other financial and operational details were not disclosed."

The press release on CNBC's preview of Cramer's visit to the Bakken Shale reads, "CNBC ... will cover this story from all angles focusing on jobs, technology, infrastructure and the American pioneer spirit, among other topics."

Cramer, a de facto employee of GE, which has a direct economic stake in his "reporting" (cheerleading), will most likely cover the "mad money" that could be made by a small handful of rich corporations, including his own, from exploitation of the Bakken Shale.

In all likelihood, though, he will not cover the angle most inconvenient to the methane gas industry -- the multitude of ecological perils inherent in fracking for gas and utilizing it once it is fracked.

Don't expect to hear, much, if any of that, in this edition of Cramer's "Invest in America" series at the Bakken Shale.