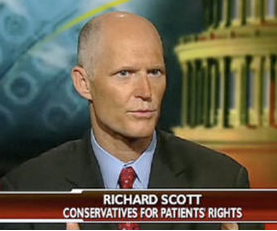 As he was gearing up to run for governor of Florida, Republican Rick Scott emerged as one of the most vocal opponents of what he and others began referring to as "Obamacare."

In one ad, the narrator said the votes of a few key senators could determine whether or not Americans would be able to keep their own doctors and their own health insurance plans. The implication was clear -- people would lose the ability to choose their own doctors if health reform passed.

Trouble was, it wasn't true.

The public option considered by the Senate at that time would have affected relatively few Americans -- just three to four million, according to the Congressional Budget Office -- and it would have negotiated rates with doctors exactly as private plans do. It would have been nothing more than an additional option for some people. It would not have reduced choice for anyone.

But to hear Scott and his group tell it, it would have led to the demise of choice and competition in health care.

Bureaucrats to Tell Employees Which HMO to Use

Well, guess what. A few days ago, Scott, now governor of Florida, said he had decided to reduce choice and competition that state workers have enjoyed for years.

Florida state employees, who currently can choose among two or more competing HMOs, are being told that all but one of their HMO choices are being eliminated and that bureaucrats in Scott's Department of Management Services (DMS) have already decided which HMO they will be enrolled in come January 1, 2012.

DMS announced early last week that, "Following the Governor's direction to reduce the size, scope and cost of state government, DMS has awarded contracts for health maintenance organization services that will save state taxpayers approximately $400 million over two years."

To save that kind of dough, Scott says his team is, among other things, reducing the number of HMOs now offered "to the most efficient for each countywide service area." DMS has picked four insurers -- AvMed, Capital Health Plan, Coventry and UnitedHealth -- to provide health benefits to state workers. The catch, though, is that those four companies will not compete with each other for state employees in the same county -- or anywhere else in the Sunshine State, for that matter.

The big winner of the four appears to be AvMed, which DMS selected as the sole HMO provider for 38 of Florida's 67 counties. UnitedHealth, which says it currently provides HMO coverage to 47,000 state workers in 66 of those 67 counties, appears to be the big loser. As you can imagine, it is not at all happy with the prospect of making less money off of Florida taxpayers. It filed a formal protest with the state a few days ago, claiming that, despite what DMS says, Florida taxpayers would have saved more money had the state allowed it to continue competing for state workers' business.

AvMed's big win has led to some raised eyebrows and suspicions. In a column headlined, "Rick Scott Lets His Pals Run a Monopoly on State Employees' Health Care Coverage," the Broward-Palm Beach New Times' Matthew Hendley wrote that AvMed "happened to be very friendly to Scott on the campaign trail."

Hendley noted that, as first reported by Health News Florida, Scott last year received $5,000 in campaign contributions "from people associated with AvMed" and that the company itself donated $10,000 to help pay for Scott's inauguration party earlier this year. Hendley says there are no records indicating that any UnitedHealth executive contributed to Scott's campaign.

Landing so much of the state's business could indeed be a windfall for AvMed, a relatively small Florida-based company that, according to its website, currently has only 320,000 people enrolled in its health plans, including state employees and their dependents. (UnitedHealth, on the other hand, has more than 30 million enrollees in Florida and elsewhere. It is the nation's biggest health insurer in terms of revenue and profits.)

Kristopher Purcell, director of communications at DMS, told me the state covers more than 375,000 employees, dependents and retired workers. While many are enrolled in a Blue Cross of Florida PPO rather than an HMO, at least 30 percent of the "HMO contracts" will be "disrupted" as a result of Scott's decision to eliminate competition.

By disrupted, Purcell means that those employees will have to switch out of the HMO they are currently in to the one chosen for them by DMS. If during the open enrollment period that begins on September 26 they do not proactively "choose" the HMO that has been chosen for them, they will automatically be enrolled in the Blue Cross PPO, which also stands to gain from Scott's decision.

Purcell said that while the premiums for the PPO should be comparable to the HMO premium, people who are enrolled in the PPO will face considerably higher out-of-pocket expenses.

Because each HMO and PPO has different provider networks, several thousand state workers and their dependents will also face having to change doctors. Purcell said the administration believes few people will actually have to change doctors because the HMOs chosen for each county will allow more doctors to join their networks.

That seems to be based on little more than hope and assurances from the HMOs, however. One of the ways HMOs were initially able to slow medical inflation was by choosing only doctors they wanted in their networks and excluding many others. When HMOs broaden their networks because of pressure from enrollees to include more doctors, HMOs lose some of their ability to control those costs.

In any event, so much for choice and competition, which opponents of the Democrats' vision of reform, including Scott, claimed would vanish if "Obamacare" were enacted. It seems as if one of the leaders of the anti-reform crowd wasn't a true believer in the value of choice and competition after all.