A "radical, possibly deranged, truthteller" will be the 2012 GOP presidential candidate, said political commentator Tucker Carlson at the 2011 annual meeting of the American Legislative Exchange Council (ALEC) in New Orleans. Speaking between workshops on the benefits of carbon emissions and task force meetings where corporations and politicians vote on "model bills," Carlson joined right-wing leaders who sang the praises of the Tea Party and "sticking to your guns," cursed Obama and other "big government liberals," and praised the same "cut, cap, and balance" agenda manifest in the ALEC bills and pushed by national politicians in Washington D.C.

Carlson, now a senior fellow with the Koch-founded and funded Cato Institute and formerly a CNN and MSNBC host, blamed the national debt on America's continuing to fund Medicare, Medicaid, and Social Security, but not the two wars launched by President George W. Bush or his tax cuts. He stated we're "not in this crisis because of what the Muslims did to us, but what we did to ourselves." Carlson said that cutting these programs will be difficult because "people want free stuff," without acknowledging that every American who works has regular payroll deductions towards Social Security and Medicare. He suggested that the difficult job for Republicans in 2012 will be to convince people they "must forego what you think is in your interest in exchange for a future benefit." 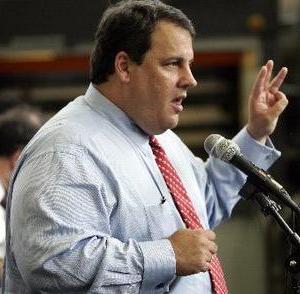 For that reason, he said, "we need a radical, possibly deranged, truthteller" for president, and none of the Republican candidates fit the bill. For Carlson, "the only politician who can be brutally honest" is New Jersey Governor Chris Christie, whom he predicted would be the 2012 Republican presidential nominee. While acknowledging that Gov. Christie had not declared his candidacy and did not look the part, Carlson said he liked the idea of a president with a "microwave burrito in one hand and a bullwhip in the other."

Louisiana Governor Bobby Jindal did not offer a prediction for the GOP nominee, but he did claim that "defeating President Obama is absolutely vital for the future of our country." Despite harsh criticism of the president from liberals, Jindal asserted that President Obama is "easily the most liberal president America has ever known" and is purportedly causing America to "retreat down the road of European socialism."

ALEC describes itself as a non-partisan, non-profit organization, but Carlson's GOP strategizing and Jindal's attack on Obama were standard fare at the ALEC conference.

Jindal also told the crowd "now is the time for an all-out push for structural reform ... it is time for a balanced budget amendment to the United States Constitution." The Louisiana governor claimed that "the idea that Congress will ever get our economic policy in order without brute force is just silly."

In this, Jindal was echoing his radical federal colleagues who were pushing to add a balanced budget amendment into the federal debt ceiling debate and establish a 2/3 vote for any tax increase -- another ALEC favorite. ALEC has a "model" state-level constitutional amendment called the Super Majority Act that passed in numerous states that would allow a minority of legislators (34%) to thwart the ability of an ordinary majority (51% to 65%) to raise revenue and meet the needs of the public.

As Jindal stated, a balanced budget amendment would radically alter and scale-back the very function and nature of the federal government, and the states. Most expect that it would cause huge cutbacks in Medicare, Medicaid and governmental programs like unemployment insurance. When the economy stagnates, the government collects less revenue just as more people lose their jobs, and the government cannot meet the resulting demand for unemployment and other benefits without running a deficit. "Brute force," indeed.

Gov. Jindal joined a long line of past speakers at ALEC conferences calling for a balanced budget amendment. In 1992, for example, then-President George H.W. Bush told the conference that "the only way to get the budget deficit under control, the major disciplinary tool, is a balanced budget amendment to the Constitution. You at ALEC have done for the amendment what Rush Limbaugh has done for the art of passionate communication." (It should be noted that Bush did not balance his budgets.)

The balanced budget amendment was not the only Reagan era artifact at the ALEC conference. Dick Armey, former House Majority Leader and head of the Tea Party-affiliated group "FreedomWorks," called on ALEC members to "defend your heroes in Wisconsin" against recall elections. The co-author of the 1994 "Contract With America" asserted that "big government liberals" are after nothing but "self-aggrandizement, power, and control." The crowd of supposedly bipartisan lawmakers responded to these claims with applause.

But Armey's sights were set on goals grander than preserving state Republican majorities. "We have a movement powerful enough to change the course of government," he said, claiming now is the time to rally the "liberty-loving grassroots activists also known as the Tea Party" to "make a fundamental change in the law and limit government in a way that will let liberty thrive!"

Stubborn 'til the End

ALEC, which calls itself a "conservative" organization, repeatedly heard the call for "fundamental change" throughout the week.

The conference also took place just after ALEC alumnus House Speaker John Boehner and Majority Leader Eric Cantor held the country hostage during the debt ceiling debate, and just as the market dropped precipitously (a crash from which it has still not recovered). Gov. Jindal, recipient of ALEC's highest honor, the "Thomas Jefferson Freedom Award," discussed the debt crisis, telling ALEC members "it pays to be stubborn and stick to your guns." When confronted with accusations "that taxes on the rich are too low, and we have too many tax breaks for corporations," Jindal said legislators must "be steely and push forward." He derided the press for "constantly urging compromise."

The ALEC Annual Meeting wrapped just as Standard & Poor's downgraded the U.S. credit rating. S&P singled out Tea Party-fueled brinkmanship over the debt ceiling crisis, and leaders' refusal to compromise or ask corporations to pay their share. This is a syndrome and consequence described by many as the "Tea Party Downgrade."