The June 8 - June 10 episodes of MSNBC's Dylan Ratigan Show featured a three-part series titled "Firewater?" It pondered whether drilling for methane gas is a path toward a prosperous "clean energy" future for the United States, or if, to the contrary, the harms of methane gas drilling, caused by a process called fracking, nullify these oft-repeated industry claims. 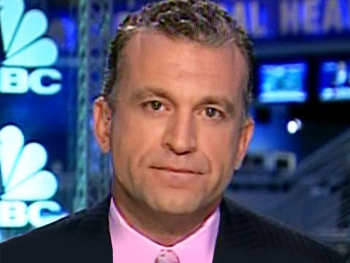 While three recent scientific reports -- one by Duke University, one by Cornell University, and one by the Post Carbon Institute -- point to the latter, Ratigan's series portrayed the issue as still up for debate, with both sides' claims having equal merit.

Lest we chalk this up to a typical display of mythical "balanced reporting" by the mass media, it is also important to remember that NBC is owned, in part, by General Electric, alongside Comcast. GE, being a jack of all trades, makes electronics, produces healthcare equipment, manufactures weaponry for war, and designed the nuclear reactors that melted down in recent the Fukushima Daiichi nuclear disaster. Furthermore, it maintains an energy wing called GE Energy, which among other things, is on the hunt for methane gas, under a wing called GE Oil and Gas.

Additionally, GE is a water privatizer, having recently attended the 2011 Global Water Summit, whose website's URL, appropriately enough, is www.WaterMeetsMoney.com. At this point, it is beyond doubt that fracking contaminates drinking water with all sorts of toxic chemicals and carcinogens, including benzene, a known carcinogen.

Yet Ratigan failed to disclose not only GE's financial interest in drilling for methane gas, but also the company's contamination of drinking water. But Ratigan's failure to disclose in his "Firewater" series went far beyond this. A day-by-day run-through of journalistic disclosure failures, thus, is in order.

Day One: Front Group Representative and Four Voices For vs. One Against

Day one of the series served as the "introduction" to the fracking debate, accompanied by an article that ran in the Huffington Post. Roughly a five-minute segment, Ratigan delved into details about "how it's done" and "who stands to gain from this project." From the onset, Ratigan said he hopes to "lay out the claims and hopefully get to the facts."

In explaining "how it's done," Ratigan did not mention that during the process of drilling for underground gas reserves, a secret stew of chemicals is injected into the ground that allows for the gas to rise to the earth's surface. Nor did he mention that -- thanks to what is now infamously called the "Halliburton Loophole" -- the U.S. Environmental Protection Agency is prohibited from applying the Safe Drinking Water Act to the methane gas drilling process. Thanks to this loophole, gas drilling companies do not have to disclose what chemicals they inject into the ground because the formulas are deemed "trade secrets." The "Halliburton Loophole" was crafted at a 2001 meeting of former Vice President Dick Cheney's secretive Energy Task force. Attendees at that meeting included -- coincidentally --the CEOs of General Electric and Cabot Oil and Gas.

Beyond that, the opening segment featured a single critic of methane gas drilling, and four supporters. One supporter was a spokesman for Cabot Oil and Gas. Another was a duped Pennsylvania hotel owner. The third was energy business baron, T. Boone Pickens, and lastly, a man named Adam Diaz, owner of a small company called Diaz Stone and Pallet. All spoke about the "safety" of the drilling process as well as the economic opportunities a massive drilling operation would create.

Diaz is an interesting case study. He appears to be an independent small business owner, but oddly is also featured prominently as a speaker on the webpage of the Friends of Natural Gas New York, a front group for America's Natural Gas Alliance, a powerful methane gas industry trade association with 30 member corporations, as well as a lobbying firm that has spent nearly $5,930,000 lobbying Congress since 2009, according to Open Secrets, a project of the Center for Responsive Politics.

Ratigan mentions none of these details on his show.

Day two, called "The Truth About Fracking," was a more "balanced" look at the domestic fracking debate. Three interviewees were anti-fracking, while two were pro-fracking.

The two pro-drilling voices -- the Cabot spokesman and Adam Diaz -- also had interviews in the first segment.

On the other hand, two out of the three anti-drilling voices were citizens whose lives are now in peril thanks to fracking occuring, literally, in their backyards. The third voice was a heroic figure for anti-fracking activists: Cornell Professor of Engineering, Tony Ingraffea.

Ingraffea co-authored what is now known as the "Cornell Study," which showed that not only can the methane gas drilling process contaminate drinking water, but beyond that, the totality of the carbon dioxide emissions process for methane drilling is dirtier than that of coal. In sum, a huge game-changer.

These are vital details, and Ratigan did not mention them. Less a failure of disclosure, this seems to be a purposeful failure to contextualize.

Day Three: No Mention of Bill Richardson's Lobbying Ties; Ratigan: "We must get off of foreign oil"

Part three of the series featured an interview with Gasland's Josh Fox, as well as an interview with former Democratic Governor of New Mexico, 2008 Presidential nominee in the Democratic primaries, former member of the U.S. House of Representatives, and former head of the U.S. Department of Energy, Bill Richardson. Fox addressed his concerns in the first third of the segment, and then the scene was set for Richardson's final verdict.

Ratigan failed to disclose that Richardson is currently a lobbyist for the big public relations firm APCO Worldwide. He was also formerly a lobbyist for numerous fossil fuel corporations, including Valero, Diamond Offshore Drilling, and the Energy Investors Fund Group. Furthermore, he used to sit on the Board of Directors of the American Energy Group. These are crucial details that would help explain Richardson's views on energy issues, including his claims that methane gas is "clean," and that the industry can be trusted to "regulate itself" because it has developed "innovative practices."

That same day, on MSNBC's sister network, CNBC, Richardson appeared on "Squawk Box" with methane gas industry lobbyist Tom Ridge, agreeing with Ridge on everything pertaining to the safety, "cleanliness," and viability of domestic methane gas drilling, and also praising T. Boone Pickens for having the "right ideas."

In concluding his three-part series, Ratigan stated that above and beyond the controversy over domestic methane gas procurement, no matter what alternative energy source the U.S. ends up choosing, it is most important that "we get off of foreign oil." This statement is a public relations line repeated time and time again by the methane gas industry, and in particular, a line used repeatedly in advertising for the Pickens Plan. He also referred to Pickens as a "friend" and a "patriot" during his conclusion.

It is a disingenuous analysis by Ratigan, as GE currently has energy contracts in two countries the U.S. military is currently occupying -- Iraq and Afghanistan -- according to the Center for Public Integrity's "Windfalls of War" profile for GE. Reuters also reported that in Sept. 2008, G.E. signed a multi-billion dollar deal with the Iraqi government to supply energy in Iraq, presumably using Iraq's "foreign" resources in doing so. The U.S. Department of State also applauded this deal, with diplomat Ryan Crocker attending the contract signing ceremony. Lastly, GE is on the long list of defense contractors the U.S. military utilizes in the occupations of both Iraq and Afghanistan, occupations that many critics like Hampshire College Professor Michael T. Klare argue are first and foremost, about controlling those countries' energy resources.

In other words, not only is GE, the company that co-owns NBC, interested in profiting off of the energy resources of the "foreign countries" Ratigan mentions through fear mongering, it also supplies the weapons that make the occupations of the country possible -- occupations that are motivated largely by the procurement and control of energy resources.

It's unclear either way from his conclusion where Ratigan himself stands on the issue. Yet it appears he was practicing the vagueness PR tactic, leaving viewers more confused and less clearheaded about the truth of the risks that accompany methane gas drilling. He was also silent on the complicity of the company that writes his paycheck in many of the problems he describes that would, in his opinion, serve as the motivation for methane gas drilling in the first place.

GE's first loyalty is not to journalistic truth, but to profits. If truth-telling would hurt their profits in the energy industry, then truth-telling will not occur. Ratigan's three-day series is an example. In another example, alongside this three-day series, GE also produced four issues in June of its weekly online magazine, Txchnologist, titled, "Natural Gas: The Golden Age of Gas?," dedicated completely to providing uncritical "reporting" on methane gas as a possible source for a "clean energy future" for the U.S. Among other things, it featured a softball interview with none other than T. Boone Pickens.

Critics will argue that this is typical of the corporate media: different circumstances, same general playbook, no big deal.

While generally true, last time Ratigan did a series on America's energy future, during his "Steel on Wheels Tour" in March, 2011 he spent multiple days on the Oklahoma State University campus touting methane gas as the "clean" solution for America's energy future alongside Pickens. Ratigan went so far as to call Pickens a "patriot" on his show.

During that same time period, President Barack Obama announced his support for the Pickens Plan. (Obama's Economic Advisor, by the way, is the CEO of GE, Jeffrey R. Immelt, a corporation that did not pay a dime of taxes in 2010). A week later, the Pickens Plan became reality through the 2011 NAT GAS Act, also known as the New Alternative Transportation to Give America Solutions or House Resolution 1380. The bill offers tax subsidies to corporations that produce methane gas-powered vehicles. The bigger the vehicle, the higher the tax subsidy. The bill currently has 190 co-sponsors.

All this leaves us wondering a few things. First, last time Ratigan covered methane gas drilling in depth, was it merely a propaganda ploy by GE to promote a product it would profiting off of in the future via the 2011 NAT GAS Act? Was the Dylan Ratigan Show "Steel on Wheels" tour just a long advertising opportunity for GE? And lastly, was production of the "Firewater" series motivated by the energy industry in an under-the-radar push for passage of the NAT GAS Act?

The next few weeks will reveal more about how corporate media and policy makers interact on matters of federal energy policy.

Really another Center for blah, blah, blah...How many "Policy Centers" does this country need for God's sake? Just another windbag with zero solutions. No better than the politicos you regularly chastise. Go volunteer at your local soup kitchen and get a grip on reality, Steve.