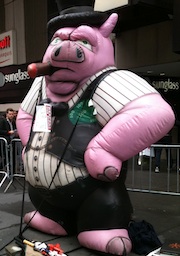 Furlong fled to New York to get away from the Wisconsinites who had been badgering him with uncomfortable questions about those embarrassing bonuses, the $1.3 billion in unpaid TARP bailout funds, and the even more embarrassing $54,000 in campaign contributions to Wisconsin's newly-elected governor. Recently, the bank posted its 10th consecutive quarterly loss of $142 million. The bonuses alone would cover half this loss, if they were retained.

At the Marriott in Times Square, Furlong was met by towering piggy dressed as a banker, and a giant inflatable "fat cat" with a grip on the throat of a worker in a hardhat. About 700 protesters outside, including New York and Wisconsin firefighters, kicked up a ruckus which echoed through Times Square's urban canyon.

Ruben Hopkins, President and CEO of the Wisconsin Black Chamber of Commerce, was in the room when a nervous Furlong, flanked by security guards, repeatedly ruled shareholders with questions out of order. "It reminded me of when they passed the collective bargaining bill, and a legislator stood in front of the Senators saying 'this meeting is in violation of the open meetings law' over and over again, and they just ignored him and passed the bill. It was exactly the same thing all over again. They passed it and walked out. Incredibly arrogant," said Hopkins.

Hopkins made the trip to New York because he wanted to ask M&I about minority lending in the Milwaukee area, and if they planned to improve their performance when they were sold to Harris Bank of Canada. "M&I's record in Milwaukee is pretty bad. The Community Reinvestment Act says that banks need to do business in communities where they have branches, but in the Central City and community block grant areas, M&I has been terrible. In some census tracks, the branches have done no business with the community. They say they have 14 ATMs in one area, but we can't find them." 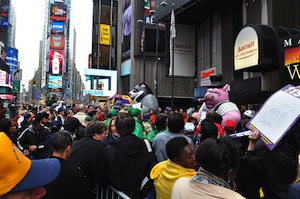 M&I used to be known as a staid, locally-owned institution that was founded before Wisconsin was a state. In recent years, M&I has gone all Wall Streety, branching across state lines and fueling the housing bubble in Arizona and Florida. When the crash came, M&I would have gone bankrupt, except for a taxpayer bailout.

"All across the country we are standing up against the banks that take taxpayer dollars then elect politicians to attack workers," said a Wisconsin firefighter outside the hotel. "We are here to say we are not going to let it go." 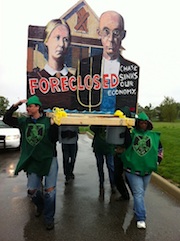 For his annual shareholders meeting, Jamie Dimon, head of JPMorgan Chase, fled New York for his frontier stronghold –- a corporate office in Ohio conveniently surrounded by a moat. Confronted with protesters seeking mortgage modifications inside the shareholders meeting, Dimon promised them assistance. Outside the meeting, his palace guard was not amused as the serfs stormed the castle.

A jolly band of men and women quickly built a wooden, pontoon bridge across the moat, and ferried dozens of pranksters in green vestments over the dark water. They were greeted by sheriff deputies and police dogs who shouted that they were under arrest. Fortunately, no holes were left in any green tights.

"It was unbelievable. They were in a fortress surrounded by police. They have a moat. They have completely separated themselves from their country, the American people and the reality of our lives," said Liz Ryan Murray of the housing group National People's Action (NPA).

Another 800 protesters attempted to block the entrances to the property as shareholders arrived. Hundreds of police were present, along with a phalanx of police horses. "It was complete overkill," said one protester who was maced with a group of her friends for no apparent reason. An artist who set a boat afloat in the pond with the iconic image "American Gothic" and the message "" was handcuffed by the sherriff's men with no sense of humor.

"We were there to bring the message to Chase that it has been years since we bailed them out and they have done nothing to clean up the economic mess they made. They are not lending, they are not fixing the foreclosure problem and they are not paying their fair share of taxes. Our cities, states and counties are in a revenue crisis. Average taxpayers are paying their fair share, but the big banks are not," said Murray. NPA produced a study showing that one in every ten houses in Ohio's major cities has received a foreclosure notice since the financial crisis began.

What would Robin do? "Robin Hood is the classic tale of taking from the rich and giving to the poor, but that is what our country refuses to do -- tax the rich. Instead it lays it all on the backs of working people and the poor," says Ryan. But that may be changing.

Fortune 500 profits are up 81 percent and the big banks are back in the black, yet it is public workers who are being asked to do more and are blamed for the state of the economy. The unfairness has not escaped notice. M&I Bank protests have been held in cities and towns across Wisconsin. This week, protesters from a new coalition called Make Wall Street Pay Illinois demonstrated at Chase Bank locations in six cities across the state. The movement to make Wall Street pay -- literally -- is gaining steam.

Someone who makes 100,000,000 doesn't buy anymore cars than the person who makes 100,000. Instead of taxing the wealthy to move income we need to force them to spend it in AMERICA. No buying stocks, no putting it in a savings account for a rainy day. Force Everyone making over 500,000 to spend 50% of their income. That would create jobs and "redistribute" the money into healthy growth.