No Exemptions for Wisconsin Firefighters and Police | PR Watch

No Exemptions for Wisconsin Firefighters and Police

The fact that they were exempt from from Wisconsin Governor Scott Walker's collective bargaining bill never prevented Wisconsin's firefighters or police from stepping up to protest Walker's union-busting agenda. Walker said the unions were exempt from the bill not for political reasons but for reasons of public safety (strikes and burning houses are not a good combination), but the police and firefighter's unions knew that their rights too could soon be on the chopping block. 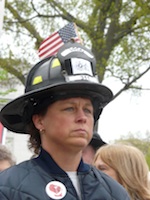 Ziegelbauer says with police and fire services making up nearly half of most personnel budgets, his proposal would "go a long way" towards solving fiscal challenges faced by localities. 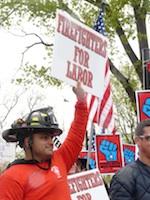 Apparently Ziegelbauer did not notice revised revenue estimates put out by Wisconsin's Legislative Fiscal Bureau last week that give a potential $636 million boost to the state's coffers the next three years due to an improving economy.

Wisconsin's public safety workers have long anticipated that their collective bargaining rights would also come under attack. They have supported fellow union members from the very start of the Wisconsin uprising. "There is one thing you know about firefighters. When there is an emergency, we show up," Mahlon Mitchell, head of Wisconsin's firefighters union, said with a grin back in February when the fight began. "That is what we do. We stand together."

Madison Firefighters Union President Joe Conway focused on the big picture. "It is time the Republicans are held accountable for what they are doing. This isn't a Wisconsin thing. This is a nationwide movement to attack all unions," Conway told news organization The Uptake in March. 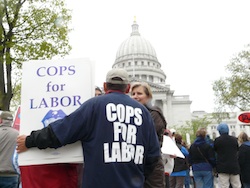 Also in February, Jim Palmer, executive director of the Wisconsin Professional Police Association, told a Madison rally, "Despite the best efforts of this Governor to divide the house of labor, we are here to say that the police and firefighters will stand with the workers."

Wisconsin's firefighters have led many marches, bagpipes blaring, one night sleeping with student and community protesters on the rotunda's hard marble floor. "Cops for Labor" T-shirts and were frequently seen at capitol marches along with "Deputies for Democracy" signs, even though regional police and sheriff's deputies were on constant rotation, putting in long hours of overtime at the state capitol.

A new sign at a recent Madison rally said, "Too Many Bad Bills for One Sign." No doubt that sentiment is shared this week by Wisconsin police and firefighters.