The wet snow and tense atmosphere did not deter thousands of people from coming to the capitol for Americans for Prosperity's Tax Day Rally. The major draw was former Alaska Governor Sarah Palin, who was announced as a speaker days before the event on Saturday. Crowd estimates vary from hundreds to thousands, but the majority of people were there to protest -- not applaud -- Palin. One local reporter paced-off the area where the majority of AFP protesters clustered and said it totaled 20 by 35 feet.

Barely audible over the anti-Walker counter-protesters, Palin, claiming she herself was a former union member and the wife of a union member, said Gov. Walker isn't trying to take away rights like the powerful "union thugs" do.

"He's not trying to hurt unions. Hey folks! He is trying to save your jobs and pensions," said Palin.

The pro-Walker supporters were a mixed crowd. Some staunch tea partiers refused to talk to reporters, thinking some were the "opposition" and accusing them of planting "spies in the crowd" to report what they were saying. Some were merely Walker supporters who aligned with tea party rhetoric on taxes. 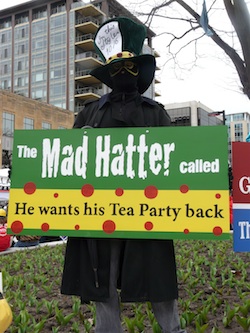 "I just like Walker's policies and I want to be one number here to tell him that I like what he's doing," said Tom Rynders of Okonomiwoc. "I have to buy my own insurance and pay for all my medical bills and retirement. They [public workers] get it handed to them for free and they got a much better deal then me."

Hundreds of competing signs popped up among the crowd on both sides, many inventive. Mass-printed AFP signs saying "Stand with Walker," "Give AFSCME the axe" and "Don't Believe the Liberal Media" were popular among the tea partiers. Hundreds of anti-Walker protesters displayed signs with "Scott, Pull a Palin and Quit" and "Wisconsin Has a History of Making Cheese and Beer, not Tea and Bullshit" amid shouts of "Shame, shame, shame" while the AFP speakers addressed the crowd.

Palin waded into the political firestorm that started in Madison in February when Walker introduced a bill to take away collective bargaining rights of unions. The AFP rally ringleader, James T. Harris, a conservative radio talk show host, said in reference to the loud counter-protesters, "What a fitting response to the ground-zero battle going on here." Another speaker said that she was proud of the tea party for standing strong, even when surrounded by the opposition.

The AFP supporters focused on the country's debt and not raising taxes for the middle class or rich, but many are hoping for more. One young organizer said she got involved with Americans For Prosperity, who CMD has designated a front group for oil billionaire David Koch, "to change the philosophy of the country."

The anti-union rhetoric was common. "They [public workers] have the world by the ass on a downhill pull and they don't get it," Rynders said. "They should be damn grateful and contribute a lot more to their pensions."

The mood grew increasingly polarized as more AFP buses and pro-union protesters converged on the King Street entrance to the capitol around 12:30 p.m. There were yelling matches between the opposing sides on the fringes of the crowd, turning the atmosphere more volatile. AFP supporters were noticeably angry that their "first amendment rights" were being squashed.

"This is ridiculous," said Ken Baehler of West Bend, Wisconsin. "My tax money is going to their pensions. What they did these past couple of months [protesting] really raised my ire." 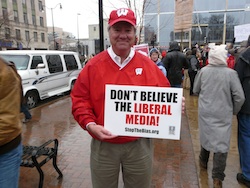 Revving up the crowd before Palin, Harris made fun of the "hippie and hippie-wannabes" that flocked to Madison to protest for workers' rights. Andrew Breitbart, a prominent right-wing commentator, told the counter-protesters, brought cowbells and noisemakers to the rally, to "go to Hell." Breitbart is most recently renowned for attempting to destroy the career of a black U.S. Department of Agriculture employee Shirley Sherrod, whom he falsely accused of being racist.

Americans for Prosperity planned the rally in concurrence with the last day to submit taxes. AFP led a tightly-controlled event, with no media area near the stage, as well as blocking off the sides of the capitol to the crowd.

Some of the quotes we gathered on Saturday: