April 4th marked the 43rd anniversary of Martin Luther King's untimely death. Thousands came together in Madison, Wisconsin to commemorate his untimely passing and the AFSCME sanitation worker protests that brought King to Memphis in the spring of 1968. Supporters of workers' rights gathered in over 1,000 locations across the country as part of the We Are One campaign for workers rights.

In Madison, thousands of teachers, firefighters, sanitation workers and more gathered in solidarity in the quickly-changing weather to hear Rev. Jesse Jackson talk about King's life and how average citizens can further his message by participating at the voting both. Today is election day in Wisconsin and hundreds of localities will chose new mayors, county executives and judges, and there is critical Supreme Court race as well. The windswept crowd, cheering whenever the sun peaked through rain clouds, stood on the hill and stairs leading up to the Capitol, were stirred with the inspirational words of action and faith that Jackson passionately spoke above them from the podium.

Jackson, who was by King's side when he was killed in Memphis, spoke at several rallies around the city before marching to the Capitol with Madison Teachers Inc., Madison's feisty teacher's union, and others who followed as the procession traveled down Johnson St. and onto State Street before finally reaching the capitol steps. The teachers were not shy in showing their support for Supreme Court candidate Joanne Kloppenburg, as almost every person carried a Kloppenburg sign.

"Today, we commemorate the crucifixion, tomorrow the resurrection," said Jackson

Focusing on collective bargaining rights and the "state rights" that seem to be spreading rapidly across the country, "suffocating workers' rights," Jackson called on every single person in the crowd "Come alive, April 5" and to vote in this week's election.

"It's time to fight back," said Jackson. "You're not just fighting Walker now, you're fighting the whole system." 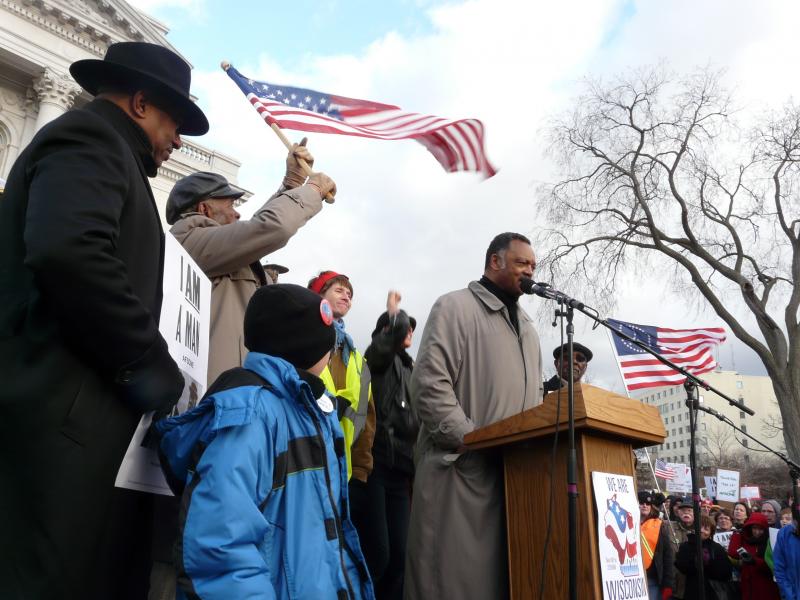 Two important guests accompanied Jackson to the rallies; Baxter Richard Leach and Elmore Nickleberry, who were Memphis sanitation workers with the Local 1733 AFSCE union in 1968 when King and Jackson came in support of the protests for equal work conditions, and where King had his famous last speech "I have been to the mountaintop."

Jackson, together with John Nichols, a writer for The Nation, started his day visiting students at Blackhawk Middle School in Madison, WI. Jackson was asked questions by students who have been studying about him in class and were told about Jackson's childhood and determination to go to college despite coming from a poor family. His visit ended with cheers that have been popular throughout the Wisconsin protests like, "This is what democracy looks like!" which were echoed by the students.

Jackson also surprised a small but determined group of health workers who were protesting at the University of Wisconsin's flagship hospital. Jackson casually walked into the middle of the crowd – stunned into silence on the windblown front lawn - in his tennis shoes and megaphone in hand with Leach, Nickleberry and Madison mayor, Dave Cieslewicz, following.

The last stop on Jackson's marathon trip traveling around Wisconsin was at the Madison Teacher's Inc. rally, were they marched together to the Capitol. Also at the rally were six members of the International Longshore and Warehouse Union, who flew in from San Francisco to show their support. Captain Josh Williams, one of the original organizers of the union and a participant in Cesar Chavez's marches in California, is "hoping for an end to the craziness soon." The ILWU flew the Wisconsin flag in ports up and down the West Coast in solidarity with Wisconsin workers yesterday.

"We know we need to stand with Wisconsin so they don't think they can come to San Francisco with the same stuff," said Williams.

According to organizers who have been a part of the workers' rights struggle from the beginning – organizers like Jackson and Williams - this is just the continuation of a battle that has been going on since the 1950s.

The historical importance of this moment in time was not lost on the crowd. Following Nickleberry, they chanted "vote, vote, vote" after Jackson's speech, instilling a collective sense of responsibility and camaraderie that could be felt throughout the state even after the crowd headed home.