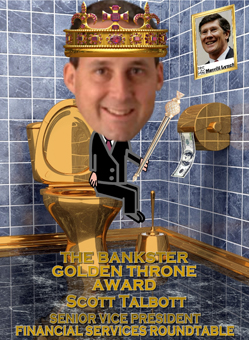 The Center for Media and Democracy and BanksterUSA are pleased to present its Golden Throne Award to Scott Talbott, the Senior Vice President for Government Affairs at the Financial Services Roundtable.

The Golden Throne Award salutes the behind-the-scenes lobbyists and spinmeisters of the financial services sector who have done their utmost to hold off any meaningful reform of their industry, even after collapsing the global economy and sending the U.S. unemployment rate above 10%. It invokes fond memories of the $1.2 million office renovation -- with its $35,000 commode -- ordered by Merrill Lynch's CEO, John Thain, shortly before the firm lost $27 billion and was rescued from extinction by Bank of America.

Scott Talbott is a top lobbyist for the Financial Services Roundtable. The Roundtable lobbies on behalf of 100 of the top banks, credit card companies, insurance and securities firms operating in the United States. Its membership includes many bailed-out banks including: Citigroup, JPMorgan Chase, Bank of America, Wells Fargo, and PNC.

"Few have done more to earn this place of honor. Through his work in the Financial Services Roundtable, Scott Talbott has been an influential advocate for the special rights and privileges enjoyed by the American Bankster," said Mary Bottari of [BanksterUSA].

The Financial Services Roundtable traces it roots back to 1912 when it was called the Association of Reserve City Bankers. It represented banks until the November 12, 1999 repeal of the depression-era Glass-Steagall Act. This repeal, 10 years ago today, tore down the fire walls between commercial banking, insurance and investment banking and created mammoth "too big to fail" firms. After fighting for the repeal of Glass-Steagall, the Roundtable transformed itself to also represent the largest securities, investment and insurance firms. Today the Roundtable is a powerful force against financial services reform in Congress and represents many of the largest bailed-out firms and financial institutions from around the globe including France's AXA, London's Barclays, Switzerland's UBS and Germany's Allianz. Click here to see its members.

Talbott views his role as an important, even historic, one. "Washington is making changes that will affect the industry for the next 100 years, so we're seeing a lot more interest from the C-suite. And our role is now more important than ever, because we're in uncharted territory," he told an admiring reporter who detailed his day including his 3:30 a.m. workout and his 1,000 calls. According to the report, Talbott is one of the few, the proud and the brave: "As finance lobbyists gird for one of their biggest battles, their ranks are growing thin. Slightly fewer than 2,600 people are now making the case for U.S. banks, insurers and investment shops -- 300 fewer than last year."

These few brave souls appear to be making quite the salary. According to Common Cause, commercial banks, finance and credit card companies spent nearly $42 million on lobbying during the first six months of 2009, about $1.6 million a week. According to the Center for Responsive Politics, Talbott's group, the Financial Services Roundtable, has spent $5.1 million on lobbying so far in 2009. These recent efforts include undermining caps on executive compensation, fighting transparency requirements for risky derivatives trading, destroying various bills to help families facing foreclosure, preventing caps on credit card interest rates and bank fees, and of course leading the fight to kill the Obama administration's signature pro-consumer reform -- a Consumer Financial Protection Agency.

Subtlety is not Talbott's strength. With regard to the Obama administration's landmark reform proposal, a Consumer Financial Protection Agency, Talbott told the American Banker publication, "Our goal will be to kill it, or make it the least-worst way to do the wrong thing."– American Banker, July 1, 2009.

While appearing on C-Span to discuss the Consumer Financial Protection Agency, Talbott was asked what type of regulation the Roundtable would support. Talbott let slip, "We're not for any regulation." – The Wonk Room, July 8, 2009.

Oblivious to the fact that the "too big to fail" banks held disproportionate responsibility for the financial crisis, Talbott fought to shelter them: "We think that it's outrageous to disproportionately and unevenly impose the cost of new regulation on the top banks." The largest banks, he added, "should not be forced by the government to ... pay the larger share of the funding costs of the Consumer Financial Protection Agency and regulatory oversight." – The Washington Post, August 14, 2009.

As the Roundtable geared up to do battle against a bill to limit overdraft fees bank fees which amounted to $38 billion last year, Talbott showed his sympathy for recession-battered consumers: it's "unfortunate that low- and moderate-income Americans find themselves (using) overdraft services more often." – USA Today, July 9, 2009.

When Congress discussed placing limits on lobbying for bailed-out institutions so that taxpayer money would not be used to lobby the government for more funds, Talbott wrapped the lobbyists in the American flag: "Our concern is with the limitations and new restrictions on free speech and the constitutional right to petition your government." – The Hill, September 11, 2009.

Opposing breaking up the biggest banks, Talbott romantically opined that big banks -- just like people -- dream the American dream: "They provide a number of benefits across the globe. We have a global economy, and these institutions can handle the finances of the world. They can also handle the finances of large, non-bank institutions like General Electric or Johnson & Johnson. They need these institutions [that] can handle the complex transactions. Simply breaking them up ... then you're discouraging a company from achieving the American Dream, working hard, earning money, producing products, and getting bigger." – The Baseline Scenario, October 12, 2009.

Talbott predicted calamity if the results of bank "stress tests" were revealed to the public (which they were): "I'm worried about the overreaction -- people selling every bank short and pulling out all their deposits and hiding their money in the mattress." – USA Today, April 24, 2009.

Talbott successfully fought against executive pay restrictions proposed for the 2008 TARP bank bailout bill: "We support the bill, but we are opposed to provisions on executive pay," said Talbott. "It is not appropriate for government to be setting the salaries of executives." – New York Times, September 23, 2008.

On the same topic, Talbott told ABC News that bank executives might quit their jobs if they were only paid only $500,000 per year. "The pay scale for Wall Street is different for the pay scale for America ... I don't think the issue is a dollar amount. It's being paid what you're worth ..." – ABC News, February 4, 2009.

Fighting to kill a bill which would allow people facing hardship to discharge student loan debt as part of bankruptcy proceedings, Talbott said forgiving student loans: "will increase the cost of tuition." – UPI, May 13, 2009.

BanksterUSA.org is a new project of the Wisconsin-based Center for Media and Democracy (CMD). CMD was founded in 1993 as an independent, non-profit, non-partisan, public interest group focusing on exposing corporate spin and government propaganda. CMD brought you the book "Weapons of Mass Deception" before the Bush team failed to find weapons in Iraq, and we exposed "Fake News" in the media and the "Pentagon Pundits" on cable news. With this new effort, we will debunk the spinmeisters of the powerful financial services industry and help ordinary Americans take positive action on the financial crisis and the real economy. CMD's first Golden Throne Award went to lobbyist extraordinaire Edward Yingling, of the American Bankers Association who, for over 30 years, has been a top lobbyist and front man for the banking industry.

Hi, lets keep linking up the growing protest and awareness movement against banks such as Chase Bank. Oh, wait, I can't leave links because the will be considered spam. So much for growing a movement.
Dear Alessandro: I often receive comments with links on blog entries, and we review almost every comment we receive. If you'd like to submit a comment to PRWatch about Chase and the financial issues with links, please do so. I'd welcome your input and help with building the movement. Lisa
Hi Lisa, I thought I tried to leave links in my last message but my comment was not accepted, maybe I misunderstood that I could leave the message as long as I answered the captcha question. This is an exciting time, although in a bad way. I have discovered some new internet resources that are discussing Chase Bank home loan modification shenanigans. Here are my four blog links that will lead you to many excellent internet resources. If you have an official blog address I can add you to two of my blogs and anytime you post a new article your link on my site bumps to the top of the blog article column. http://www.daily-protest.com http://www.bloggersagainstchasebank.com http://www.thecatwhoatechasebank.com http://www.robotsagainstchase.com
This guy, Scott Talbott is a soft piece of s***.
Well done on the award Scott, you have hepled detroy the world, be proud. Regulations are for a reason, to stop greed overriding sanity and social conscience. Alan Greenspan finally admitted he was wrong to assume the financial sector would self regulate. Any thoughts ???
What about discharging the loan in bankruptcy when Chase doubles my interest rate, does some shifty swap that tacks on $17k, tells me to pay $1k a month, refuses to explain why my $50k in student loans became $90k, then $100k, throws me into default and files a lawsuit for $170k. Is this why Congress blocked the bill that would have given me bankruptcy protection back? Am I food for massive banks? THIS IS WHY I HAVE A BS IN ENGINEERING AND AM HOMELESS!? They bailed these banks out and ultimately, it will be my generation paying the $15 trillion dollar bill, along with their war spending, while I can't discharge my private student loan that the bank illegally destroyed everything with. How much were those Senators paid off to look away? They should have just shot me. How do I explain this mess to Australia and Canada while I beg them to let me immigrate? Was this congress before Elizabeth Warren?!