Today, the Real Economy Project of CMD is introducing a new award we are fondly calling our "Golden Throne Award." The Throne salutes the behind-the-scenes lobbyists and spinmeisters who have managed to maintain the status quo and hold off any meaningful reform of the financial services sector since the collapse of Lehman Brothers, Merrill Lynch and AIG rocked the world one year ago this week. The award invokes fond memories of the $1.2 million bathroom renovation ordered by Merrill's CEO, John Thain, shortly before the firm lost $27 billion and collapsed into the arms of Bank of America (BofA). 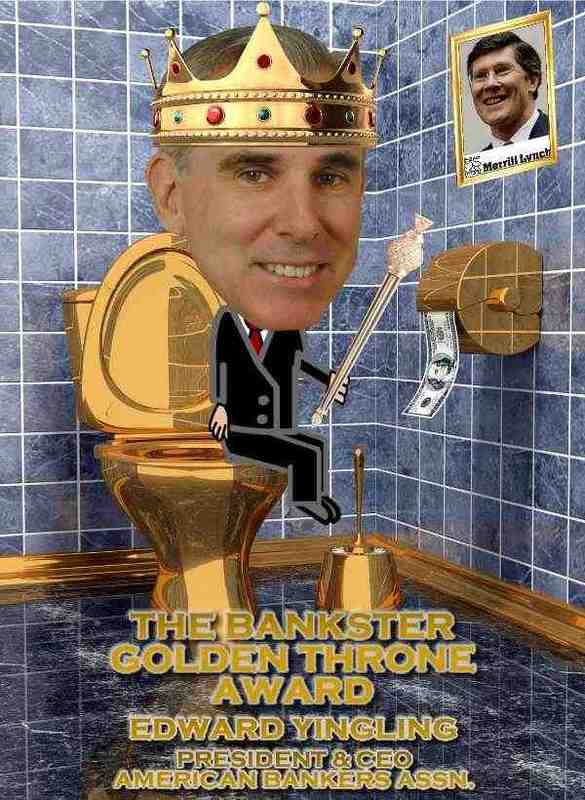 Our first award is being presented to lobbyist extraordinaire EDWARD YINGLING, who for over 30 years has been a top lobbyist and frontman for the banking industry. Currently, he is the President and CEO of the American Bankers Association.

Our press release on the award lauded Mr. Yingling: "Few have done more to earn a place on this seat of honor. From his days as a cub lobbyist fighting to rid the nation of caps on interest rates, Glass-Steagall and other proven consumer protections to his recent yeoman's effort to keep bank fees unregulated and kill off the Consumer Financial Protection Agency, Edward Yingling has consistently been a true advocate for the American Bankster." The proposed Consumer Financial Protection Agency -- a type of financial product safety commission for credit cards and other consumer products -- is a top priority for consumer and public interest groups and the top target of the financial services lobby and the U.S. Chamber of Commerce. While Yingling has fielded a huge array of lobbyists to battle the measure, the Chamber recently launched a $100 million campaign to fight the measure. You can be sure you will be hearing more about that campaign from us in the weeks to come.

Arrayed against this onslaught is a vibrant coalition of consumer, housing, and labor groups called Americans for Financial Reform who are trying to keep Congress accountable to the folks that elected them. Last week, the Consumer Federation of America released a well-modeled and statistically-significant poll demonstrating that 57 percent of Americans support the creation of a new federal agency to protect consumers who purchase banking and other financial products and services. Those most adversely affected by many unfair and deceptive financial practices expressed the strongest support for a new consumer protection agency -- young adults under 35 years (70 percent), African-Americans (79 percent), Hispanic-Americans (70 percent), and low-income persons (69 percent).

Consumers know well that we need a new sheriff to police the banksters of the world. Learn more about Mr. Yingling below and if you would like to receive more alerts on American Banksters contact us at info@banksterusa.org. Here is a recent photo of Mr. Yingling (on the right) with his buddies, Lloyd Blankfein of Goldman Sachs, Kenneth Chenault of American Express, and Ken Lewis of BofA.

YINGLING'S LOBBYING: According to the Center for Responsive Politics Yingling's group, the American Bankers Association, has already spent $4.4 million in 2009 on federal lobbying efforts. These efforts including blasting the Consumer Financial Protection Agency, watering down the Credit Card Holders Bill of Rights, tanking the bill to allow bankruptcy judges to modify mortgages, undermining efforts to cap executive compensation, molding the TARP Reform and Accountability Act and other federal bailout programs to their liking. In addition to their own formidable lobbying force, the ABA has tapped a stable of talent from illustrious K Street lobbying firms. While Yingling takes the heat for his members by answering requests for high-profile media interviews, according to the Washingtonian, Yingling is paid a mere $2.1 million per year.

YINGLING'S DINGALINGS: After the collapse of the global economy due to insufficient protections for consumers against predatory loan practices -- Yingling: "There is no shortage of laws designed to protect consumers." Congressional Testimony, July 14, 2009.

On a reform measure that would require all bank communications with their consumers be "reasonable" -- Yingling: "This term is so vague, no banker would know what to do with it." Congressional Testimony, July 14, 2009.

Fear mongering on a bill to allow judges to modify mortgages during a bankruptcy to help keep people in their homes -- Yingling: "The cram down provision if it became law would raise the cost of all mortgages for everyone." New York Times, April 22, 2009.

Fear mongering on the Credit Card Holder Bill of Rights which put an end to many of the tricks and traps associated with credit cards -- Yingling: "Those that manage their credit well will in some degree subsidize those that have credit problems." New York Times, May 18, 2009.

On the Federal Reserve's modest efforts to increase disclosure for credit card fees and interest rates -- Yingling: "The Federal Reserve's proposal is an unprecedented regulatory intrusion into marketplace pricing and product offerings." New York Times, May 3, 2008.

On traditional caps on interest rates (usury laws) which were America's primary protection against loansharking since Colonial times -- Yingling: "[I]n this country, we have a strong bias against controls on prices. We don't have the government set prices. And we do that for a very good reason, because it tends to mess up the economy. That's the kind of thing they do in command and control economies, and it didn't work very well in East Germany and the Soviet Union to have price controls." Frontline, September 16, 2004.

Does anybody have his email address? Would love to clog his inbox with expletives, insults and threats...
FANTASTIC IDEA....Put THEM on the hotseat for once!!!!! The best disinfectant is sunlight!!!