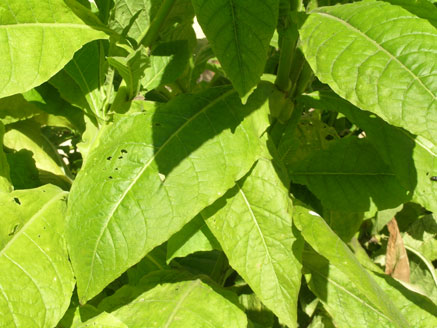 A recent study in the Journal of Preventive Medicine found that young people who feel action should be taken against the tobacco industry are more likely to want to quit smoking.

To determine young people's attitudes toward the tobacco industry, researchers asked how strongly they agreed or disagreed with the following statements:

Compared to respondents who didn't support action against the tobacco industry, those who agreed with these statements were three times less likely to be smokers. Among current smokers, respondents who had a negative attitude towards the industry were over four times more likely to plan to quit, compared to smokers who didn't support action against the industry. The study was the first to link attitudes toward the tobacco industry to smoking behavior among young adults.

Given the new evidence that knowledge of the industry's dirty dealings can help people stop smoking, what better cessation aid than TobaccoWiki?

To the industry, less is more

Cigarettes may be the most highly engineered consumer product in history. Unlike alcohol, marijuana, cocaine or heroin, cigarettes have been the focus of an astonishing amount of corporate money and scientific innovation over the decades aimed at making smoking easier, more addictive and -- most importantly -- more profitable for the manufacturers.

In 1940, a commercial cigarette contained 1300 milligrams of tobacco by weight. By the 1980s it contained only 750 milligrams of tobacco, or about 40% less tobacco than 60 years ago. This is in part because modern cigarettes contain more additives. Another reason is that cigarettes now contain more air and less tobacco. Cigarette makers "puff" tobacco using dry ice or other gases, the same way that wheat or rice is "puffed" for cereals. Puffing expands the tobacco volume without increasing its mass, thus allowing manufacturers to put less tobacco in their cigarettes, charging smokers for more air and less tobacco.

Realize what's in your cigarettes

The best motivator to stop smoking might be learning about cigarette additives, cigarette contaminants or tobacco industry target marketing.

To make cigarettes more appealing and to increase their profits, tobacco companies have poured hundreds of millions of dollars into research and development. They've added ammonia to freebase nicotine, which gives smokers a faster, harder kick upon lighting up. This process essentially turns nicotine into "crack nicotine," making cigarettes even more addictive.

The tobacco industry has also used flavorings that have anesthetic side effects, like menthol or eugenol. These cigarette additives make people's airways less reactive to the harsh effects of smoke. Other additives include humectants to moisturize the tobacco, sugars for "overall taste and smoothness" and burn accelerants, like sodium citrate. Accelerants keep cigarette paper burning, leading smokers to consume more cigarettes. They also make smoking a leading cause of fatal fires in the U.S.

Unlike other manufacturers of legal products, though, tobacco companies can't boast about their ongoing efforts to "improve" cigarettes. They can't advertise that their products are "more addictive and even easier to smoke." Unlike other consumer products from shampoo to corn flakes, cigarette packs do not list their ingredients. Smokers are simply expected to feel and respond to tobacco company R&D through their brand selections.

Unfortunately, one of the ways smokers do feel the difference is in increased difficulty with quitting. Information about the addictiveness of nicotine is also not printed on cigarette packs. Warnings that cigarettes cause disease do appear, but to help avoid liability, cigarette companies are careful to attribute these health warnings to others, like the Surgeon General or "public health officials." This helps cigarette makers shirk responsibility for the physical effects of their products on consumers.

Smoking is costly, but so is quitting. What to do?

Cigarette price hikes and tax increases have made smoking more expensive than ever, but quitting can also be costly. In 1988, the U.S. government declared that nicotine is addictive in the same manner as heroin and cocaine. Decades after that acknowledgment, it's easy to find cigarettes -- at convenience, drug, and grocery stores, or gas stations -- but more difficult to get help to stop smoking.

Nicotine replacement products, like patches and gum, cost about as much as smoking. A visit to a doctor's office to obtain prescription smoking cessation medication, and the medication itself, are also expensive, as is behavioral counseling. Many health insurance policies don't cover the costs of quitting smoking. Even electronic cigarettes -- which some argue are safer than traditional cigarettes since they don't actually burn tobacco -- cost about $150 a pop, not including replacement cartridges.

If you're a smoker, your health and your money are on the line. What can you do? Here are a few free ways to help kick the habit.

After a decade of studying tobacco industry documents, I have great empathy for the dilemma faced by the millions of smokers who want to quit. You are in a very difficult position -- far more so than are the users of any other legal product. Once you allow a tobacco company chemical access your brain by using its products, it's no easy task to get them out. I sincerely wish all those smokers trying to quit the best of luck.

Anne Landman is the editor of the TobaccoWiki portal on SourceWatch.

This study doesn't bring any novelty, I think it's pretty obvious that the smokers that are against the tobacco industry are most likely to quit smoking, anyone could have guessed that. A smoker that plans to quit always searches for the arguments that will support his plan. Kim