We recently received an email from someone who asked, "What is the difference between a 'product placement' and a 'video news release' (VNR)? Is a VNR a type of product placement?" Since other people might have the same question, I thought I'd post my answer here. On SourceWatch, we have articles about both topics. As our article about video news releases explains, a VNR is a piece of video that is created (typically by a public relations firm on behalf of a paying client) and designed to look like a news segment for broadcast by TV news programs. It deceives audiences by creating the impression that the "news" they see on TV was produced by independent reporters, when in fact VNRs are promotional pieces designed to sell something for a client whose identity is not always disclosed. TV news shows often deny that they use VNRs, but Diane Farsetta, our senior researcher, has done extensive research in which she found numerous examples of the practice. "Product placement" is a separate but similarly sneaky practice of getting television programs and movies to display a company's product within their program. 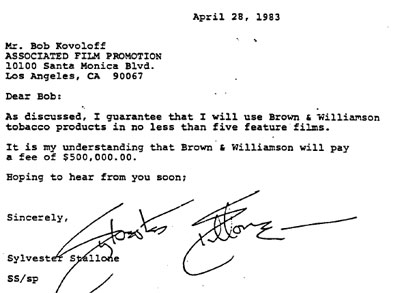 Product placements are not limited to news programming, and they are not limited to television. Sometimes actors or movie companies are actually paid to place a company's products in their films. For example, here is the link to a letter in which the actor Sylvester Stallone (star of "Rocky" and other movies) agrees to use Brown & Williamson tobacco products in five of his movies, in exchange for $500,000. Product placement also occurs on television, especially on entertainment, game shows and "reality TV." A recent Nielsen media analysis gave some examples in which Coca-Cola products were placed on episodes of "American Idol," National Football League products were placed on an episode of "Deal or No Deal," and exercise products were placed on "The Biggest Loser." What both VNRs and product placement have in common is that they seek to insert commercial messages into programming that the audience does not perceive as "advertising." In this sense, they are both sneaky and deceptive. However, they use different mechanisms for sneaking in their messages.