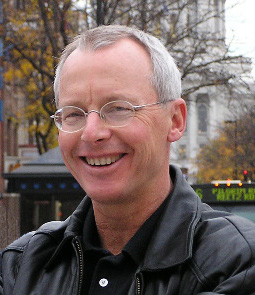 CMD Founder and Executive Director John Stauber has been in Germany, Austria and Belgium for the past two weeks speaking in major cities and discussing the publication of "Toxic Sludge Is Good For You" in German. On May 16 Vienna's daily paper Der Standard ran an interview with Herr Stauber that can be read in German by searching his name on their website. He was previously interviewed by Nils Klawitter for the German magazine Der Spiegel, and a translated portion of the interview is below. (Thanks to Orange-Press, publishers of the German edition of Toxic Sludge Is Good for You, for the translation.) If you would like to read the German interview in its entirety, please go to: http://www.spiegel.de/wirtschaft/0,1518,481658,00.html

Spiegel: For you the media as the Fourth Estate and as a fortress against propaganda is a myth: you write that in many cases the American media is nothing more than the stenographer of the powerful. Instead of discovering propaganda, the media serves as a channel for it.

John Stauber: America surely is the country mostly influenced by PR, which is a multi-billion dollar industry. Tens of billions is a conservative estimate. Unlike in Germany, in the United States journalists are clearly outnumbered by spin doctors. You immediately grasp the scale of this influence if you compare the USA with other western democracies and see how topics such as climate change, environmental toxins, and workers' rights are discussed. This is exemplified most clearly by the war in Iraq. The big media companies actually repeated the lies of the Bush regime. The result of a poll was, that even last July, half of all Americans still believed that Saddam Hussein had weapons of mass destruction. That's the idea of the embedded reporter.

Spiegel: In your books "The Best War Ever" and "Weapons of Mass Deception" you compare the techniques of war-PR with those of PR during crisis.

Stauber: The point is always to inject the media with your own agendas. That includes seeing that there is continuity in the messages and feeding the media accordingly. At press conferences only suitable questions and inquirers are accredited. With the possibility to report embedded in the army's coat-tails in real-time, the government presented the war to the media in a way that war in the media became very successful. One alarming news item followed the next.

Spiegel: The former defense secretary Donald Rumsfeld said that the real battlefield was the public opinion in the United States.

Stauber: And this opinion cost a considerable amount. From the beginning of 2003 until the middle of 2005 the American government paid $1.6 billon to PR-agencies and journalists. One agency, the Lincoln Group, even arranged forged news in Iraqi newspapers. US-friendly reports were simply bought, and the US-government could proudly represent it to the media at home.

Spiegel: If it is as you write that the power of the media gets more and more concentrated in fewer corporate groups, then there must be some gaps for opposing views.

Stauber: There is also a boom on the alternative side. Small, local radio stations are growing enormously. The alternative TV-program Democracy Now! is extremely successful, there is a hunger for counter culture. Recently the young journalist Sarah Olson reported on a lieutenant, Ehren Watada, who refused to go to war in Iraq. In his opinion it was an illegal war of aggression. Sarah Olson was then subpoenaed to give evidence on oath against this officer before a military court. The message was clear: It was a warning to soldiers and journalists, not to report on the increasing number of refusals in the army. Only after heavy protests was the summoning of Olson abandoned. However, between these new independent voices and the Mainstream media persists a deep gap. We noted this with our book "Weapons of Mass Deception". Although it was on the bestseller list of the New York Times for weeks, the established media did ignore it.

Spiegel: However at a political level there seems to be some change. For the first time since long time critical hearings in the House of Representatives are taking place.

Stauber: My colleague and co-author Sheldon Rampton was invited there a few weeks ago. He gave testimony about how the Bush regime repressed scientific reports on global warming. Already in the 1980s the topic global warming has been virulent, whereupon the oil and coal industry immediately began to buy scientists to disprove the risks of climate change. It's called the third party technique, which is to promote "bought" experts. Another technique is to found pseudo-scientific front groups.