Defend the Press and Sarah Olson

We've seen a powerful show of support for our Defend The Press campaign against military intimidation and harassment of journalists including Sarah Olson. In the past 72 hours Defend the Press has been endorsed by a diversity of news media and public interest organizations from Free Press to the Organic Consumers Association, from Mother Jones to Mothering magazines. Some of these organizations have sent emails to their thousands of members urging support for the campaign. Others have posted banners at the top of their websites. The National Press Club issued a news release on behalf of Sarah Olson and other subpoenaed journalists, and endorsed Defend The Press.

Scores of notables in the journalism, academic, and public interest communities have added their names, posting comments, writing letters and articles. Phil Donahue, fired from MSNBC in March, 2003, for daring to have war critics on his popular national TV show, is just one of many people writing articles and sounding the alarm about the military's efforts to drag journalists into the February 5, 2007 court martial of soldier and Iraq war resister Ehren Watada.

We are asking everyone who has done something, to do more. If you've made a statement, write an article. If your organization has taken a stand, send an email to your list of supporters urging them to do the same. The court martial of Ehren Watada begins near Tacoma, Washington on February 5, and we have just days to use our power of persuasion to back the military court away from its dangerous imposition of subpoenas to journalists, trying to make them part of the prosecution. The subpoena of journalists in the Ehren Watada court martial is from the President of the United States. A revolt is underway in the ranks of the military families who have borne the greatest burden among Americans for the Bush administration's disastrous, and apparently escalating, war in Iraq. Clearly this Administration remembers how opposition from soldiers and their families was key to stopping the war in Vietnam, and it is seeking to drive a wedge between military families, soldiers, the press they might talk with and the public who would see, hear and read their reporting.

The Bush Administration wants the American people to think we are receiving the viewpoint of typical military families and soldiers when we hear or read a statement from the Republican front group Vets for Freedom, or the hardcore rantings of PR maven and talk show host Melanie Morgan and her Move America Forward campaign. But those are PR-driven efforts, propaganda campaigns for Bush's war. The real story of military families and soldiers is being told in indy films like The War Tapes and The Ground Truth, by military families themselves who are organizing at the grassroots against the war, and in the reporting of journalists not afraid to interview soldiers who themselves are not afraid to publicly dissent. 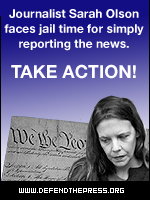 I've heard from some individuals who surprisingly fail to see the significance of this military harassment of journalists such as Sarah Olson. "What's the big deal anyway, she should just testify or cut a deal," is a response I've heard from a few who prefer to debate and parse the meaning of the First Amendment rather than grasp the reality at hand. The war in Iraq would never have happened, in my opinion, had the mainstream US news media simply done its job and questioned the assertions of the Bush/Cheney administration. Instead, as Sheldon Rampton and I have documented in our two books on the war, the US news media became like cheerleaders for attacking Iraq, like a propaganda arm of the Bush administration.

Dissenters and war critics, no matter who they were or what their expertise, were mostly kept out of stories and off the airwaves. Journalists who did feature critics of the rush to war, such as Phil Donahue, were warned, punished or fired. Some journalists, like the New York Times Judith Miller, actively became agents of the propaganda campaign, passing on the pro-war lies and deceptions of the CIA-created and US government-funded Iraqi National Congress.

This is the real-world context in which Sarah Olson, Dahr Jamail and other journalists are being dragged into the court martial of the first commissioned officer to refuse deployment to the war in Iraq. Lieutenant Ehren Watada is trying to put the Iraq war itself on trial in his court martial because he believes it is illegal, and that is the basis of his refusal to deploy. The military court has shut down his efforts to try the war. Worse yet, by subpoenaing independent journalist Sarah Olson, the President of the United States is sending a message to both military families and the press -- shut up and be silent or there will be trouble.

Sarah Olson is an independent journalist. She is on her own, with only the support of her fellow journalists, citizens and fellow defenders of a free press and free speech. Remember, it was independent journalists like Sarah Olson who were standing up to the false and deceptive propaganda of the Bush administration before the March 2003, attack on Iraq. But the views and reports of the independent press were not what the vast majority of the American public was receiving. The independent press was interviewing the war critics, pointing out the lies and fallacies that were being reported as fact or truth on the mainstream TV networks and in the front pages of the New York Times and the Washington Post. It is the reporting and opinions expressed in the independent press that could have prevented the war, had the public heard, seen or read their reports.

Now, it's a new day, a new reality in America. The public remains terribly confused and misled about the reasons for war and the truth that Saddam Hussein had nothing to do with 9/11, had no ties to Al Qaida, and had no WMD program. But despite the public's continuing confusion and the success of the Bush propaganda campaign, most Americans have swung solidly and unalterably against the war and the Administration.

The media environment itself has changed. Some of the mainstream journalists who were duped or misled, or who willingly promoted the war, have changed their tunes. Unfortunately, the overall reporting pattern of the big media has not changed. The critics, dissenters, peace activists and independent voices that were right in opposing the war, are still today mostly left out of mainstream coverage of the war and US foreign policy. The talking heads dominating the TV, the media source of most news for most Americans, are still primarily from corporate and right wing think tanks and academia that supported the war.

Since the launch of the war, an Internet based on net neutrality has allowed independent journalists and voices to reach a growing number of Americans. If the media reform movement continues to develop clout, net neutrality will be protected. With net neutrality and the advance of new technology, the influence of independent Internet-based TV, radio and web journalism will continue to grow. The views and reporting of Sarah Olson and others will reach a much wider audience of Americans, most of whom now oppose the Iraq war.

This is the context of the White House attack on Sarah Olson and on the independent press she represents. I hope others who have not yet joined this fight to defend the press will soon do so. We need to show that we've learned our post-9/11 history lessons about the dangers of media censorship and government propaganda, and the importance of protecting courageous independent journalists who buck them both.

Now is the time to fight back and defend free speech and free reporting, and especially defend the rights of the brave, independent journalists who are filing the stories we most need to read and understand if we are to change course and confront the disastrous and horrific US foreign policy still unfolding before us.