"Death panels" are back in the news and Congress is turning its attention to them once again. The problem is, lawmakers are looking in all the wrong places.

The proposed provision would have allowed Medicare to pay doctors to counsel patients about their end-of-life medical wishes. That idea originally had bipartisan support, but when the provision was brought to Sarah Palin's attention, she accused Democrats of wanting to create "death panels" that would decide when to pull the plug on granny and grandpa. The House Energy and Commerce Committee, now headed by Republicans, sent a letter to Health and Human Services Secretary Kathleen Sebelius last week demanding to know how a controversial provision that was excised from last year's health reform bill wound up -- briefly -- in a government "rule" on physician reimbursement. 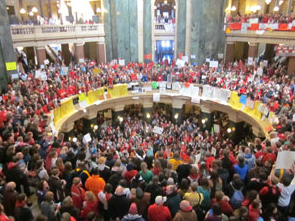 Wisconsinites and many across the nation have received a wake-up call in the past two-plus weeks with the labor protests in Madison, in Wisconsin and in the other 49 states.

"This movement is one we will look back on as a brand-new awakening for our nation," said Center for Media and Democracy Executive Director Lisa Graves, speaking as part of a panel on Media and the Wisconsin Labor Struggle. "This awakening has been long in coming and it's going to need to be sustained."

Graves was among the panelists for the free public forum held Thursday night, March 3, at the Orpheum Theater in Madison, and organized by the The Labor & Working Class Studies Project at the University of Wisconsin-Madison's Haven's Center. Graves said the eyes of all have been opened to how little corporations pay in taxes, and how they have shaped the divisive budget debate in Wisconsin and elsewhere.

Cheesehead hats have never been so chic. The foam wedges could be spotted on the heads of people gathered in crowds throughout the U.S. yesterday, as protesters in all 50 states rallied in support of Wisconsin workers. The events were organized by MoveOn.org. Here's a brief roundup of some of the action from across the nation:

In his attack on workers' right to bargain collectively, Scott Walker is diametrically opposing the legacy of former President Ronald Reagan -- the same conservative figure Walker idolized in his prank phone call with a blogger posing as "David Koch."

Reagan understood the importance of unions intimately. He served seven terms as president of a labor union -- the Screen Actors Guild -- during tumultuous years from 1947 to 1952, and again from 1959-1960. Under his tenure, the union became one of the first to require a loyalty oath from its members. As president of SAG, Reagan fought for and won many payment rights for actors during at the time when the popularity of big-screen movies waned due to the advent of television. Under Reagan's presidency, SAG members also won pension and health plans.

Governor Scott Walker's budget repair bill effectively dismantles over 50 years of public sector collective bargaining rights in Wisconsin. While bill supporters have obscured the reasons that hundreds of thousands have been protesting (acting as if the controversy is really about pension and healthcare contributions rather than union-busting, and claiming the fiscal gaps exacerbated by Walker's tax cuts leave the state with no choice but to crush unions), others recognize the attack on collective bargaining rights but nonetheless support it as applied to taxpayer-funded public servants. Should public sector workers be allowed to organize?