Convention of States Fires Up Base for Push to Rewrite U.S. Constitution | PR Watch

Convention of States Fires Up Base for Push to Rewrite U.S. Constitution 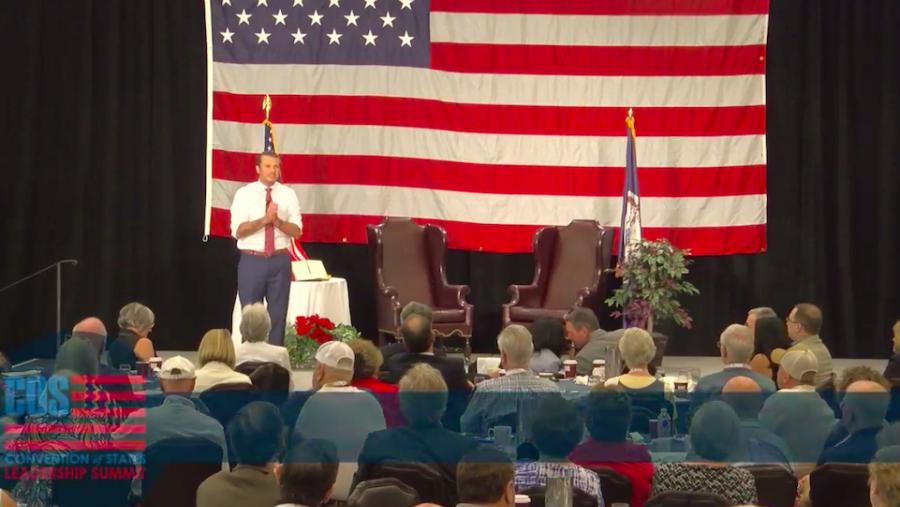 Convention of States Action (COS) kicked off its first "Leadership Summit" in Colonial Williamsburg, Virginia today. COS, a project of Mark Meckler and Eric O'Keefe's Citizens for Self-Governance, claims that "hundreds" of activists, state directors, and coordinators from all 50 states will attend to get inspired and learn strategies for passing COS resolutions in the states calling for a constitutional convention to rewrite the U.S. Constitution.

Fifteen states have passed the group's applications so far, with 17 more states considering the resolution this year, according to COS. Wisconsin recently introduced a COS resolution, which would bump the number up to 18.

A constitutional convention has never been held since the Constitution was adopted, and COS will need 34 states to file applications in order for it to occur. If that happens, COS plans to move an array of sweeping amendments to redefine key parts of the Constitution and radically weaken the federal government.

COS has ties to the American Legislative Exchange Council (ALEC), the National Rifle Association, the right-wing militia group Three Percenters, and the Christian nationalist group WallBuilders.

More than 200 civil rights and public interest groups, including the Center for Media and Democracy (CMD), signed a letter last year denouncing such constitutional convention calls as "a threat to every American's constitutional rights and civil liberties."

Fox News anchor Pete Hegseth, from Trump's beloved Fox & Friends, addressed the crowd this morning, telling them that the Left hates the Constitution, the founding fathers understood that the word of "Jesus Christ our savior" is the guiding force for our country, and that there "is no other freedom-loving bastion in the world that values the individual with God-endowed rights."

And, referencing the Three Percenters likely in attendance, Hegseth said, "it has always been the one percent or two percent or three percent of people that get it, that are willing to buck the comfiness of their moment and the established norms that everyone is comfortable with, willing to be defiant, willing to stand -- be accused of being radical about things that are not radical at all."

Recently, Hegseth has made some radical comments himself, saying that Congresswoman Rashida Tlaib (MI-D) has a "Hamas agenda," implying that she works with a U.S. designated terrorist organization.

Hegseth has also publicly defended Secretary of Education Betsy DeVos's brother Erik Prince's Blackwater contractors, who were convicted of murdering Iraqi citizens, and has called climate change a "religion" that Democrats use to "control" people.

David Barton warmed up the crowd with a history lecture on the Constitution's basis in fixed moral standards based on natural law and scripture, and drew applause with his claim that the federal government has "emasculated the states."

A Christian nationalist with strong anti-LGBT views. Barton once said,

"There's a passage that I love in Romans 1. ... [I]t talks about homosexuality and it says that they will receive in their bodies the penalties of their behavior. ... The Bible [is] right every time ... and that's why AIDS has been something they haven't discovered a cure for or a vaccine for. ... And that goes to what God says, 'Hey you're going to bear in your body the consequences of this homosexual behavior.'"

Barton founded the group WallBuilders, which has worked with Focus on the Family and the Family Policy Alliance to influence judicial elections and selection rules in states across the country, the Center for Media and Democracy detailed.

WallBuilders also works with the Congressional Prayer Caucus Foundation to push out Christian-Right model legislation in the mold of ALEC to state lawmakers under the name Project Blitz.

Also in line to speak at the Summit is one of the NRA's top attorneys, Charles Cooper. Cooper will speak on, "The Real Threat to Gun Rights." In an email to COS activists, Cooper is quoted as saying:

COS materials in recent years have argued that a constitutional convention could be used to rewrite the Second Amendment in order to make it Supreme-Court-proof.

Others on the agenda to speak include founding board member Eric O'Keefe, former professor Rob Natelson, former U.S. Senator and COS Senior Advisor Tom Coburn, and the right-wing author of Liberty Amendments Mark Levin.

But the stars of the summit are likely to be the actors COS will have play the founding fathers Patrick Henry, James Madison, and George Washington.

Stay tuned to ExposedbyCMD.org for more on the right-wing's effort to rewrite the Constitution.

I thought this Organization was gathering Applications for an ARTICLE V Convention in order to make Amendments to the Constitution for the purpose of addressing Federal Government Over-reach, rein in the out-of-control government Spending, and impose Term Limits on Elected positions including SCOTUS. That's not a Constitutional Convention! Sounds like a great plan to me. Time to get rid of the deadbeat Reps who are making $$ from insider information & doing nothing to address issues like Immigration, & the partisan SCOTUS who is delegating our rights to illegal Departments that make rules & regulations instead of making Congress do it's job & actually make laws. "The real threat to our constitutional rights today is posed not by an Article V Convention of States, but by an out-of-control federal government, exercising powers that it does not have and abusing powers that it does." Sounds like they are closing some Loopholes! Both sides need to Stop Telling Me What To Do & get to work.
Couldn't agree with you more, Deborah. COS is a non-partisan organization. Democrats and Republicans alike support COS. EVERYONE, except the politicians themselves, wants term limits.
She was talking about how we DONT WANT TO REWRITE The Constitution but only AMEND it. HELLO ! Where are we really going with this ? I see some of the talk above while touting it's not a partisan issue they say words like "EXTREME RIGHT WING" an awful lot here
All we need are two amendments, One would be to end the wealthy from pouring money into our elections. The second would be to end the fake news. Now we all know this could never happen because the financial support for COS is actually coming from the the very wealthy who support the fake news. It's like George Carlin said, "it's a big club and you ain't in it."
The convention of states refers to the Article V section of the constitution, wherein out founders foresaw a time when the government of the U.S. would become corrupt, and not represent their betters, the people. Article V permits a convention of states to assert their will over a rogue government. The second amendment is a backup. We are damn close. Stand by.