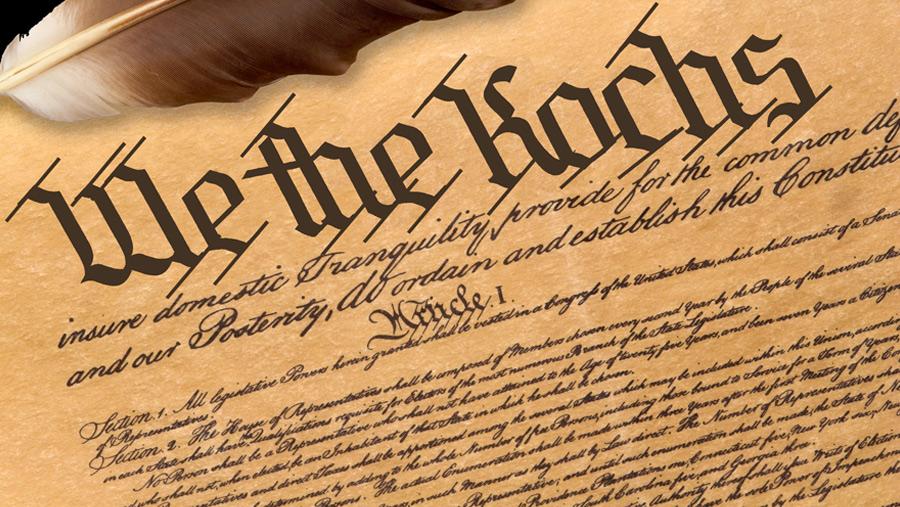 This year's legislative season saw a strong push in the states from right-wing groups, bankrolled by the Koch brothers and other ultra-conservative billionaires, hoping to convene a national constitutional convention in order to inject rigid fiscal constraints into our country's founding document. Advocates of a federal "balanced budget amendment" (BBA) picked up two more states, Wyoming and Arizona, in their drive to win the 34 resolutions needed to bypass Congress and convene a convention to propose changes to the U.S. Constitution.

That momentum, however, was blunted by surprisingly successful campaigns to rescind convention calls in three states, New Mexico, Maryland, and Nevada. As a result, BBA proponents now claim 27 states in their column, down from 28 at the beginning of the year.

Two steps forward and three steps back…from the brink of a political experiment untried since 1787.

Under Article V of the Constitution, amendments can be proposed either by two-thirds of both the House and Senate, or through a convention called for by two-thirds of state legislatures (currently 34 states). After adoption at a convention, any amendment must be ratified by three-fourths of the states (currently 38 states) before it can become part of the Constitution.

While amendments proposed by Congress have been adopted 17 times since the Constitution's ratification, a constitutional convention has never been called. Critics of this approach, from the Left and the Right, are concerned about how such a convention would play out in this era of massive political spending by billionaires and corporations, especially since there is nothing in Article V limiting the scope of a convention once called. 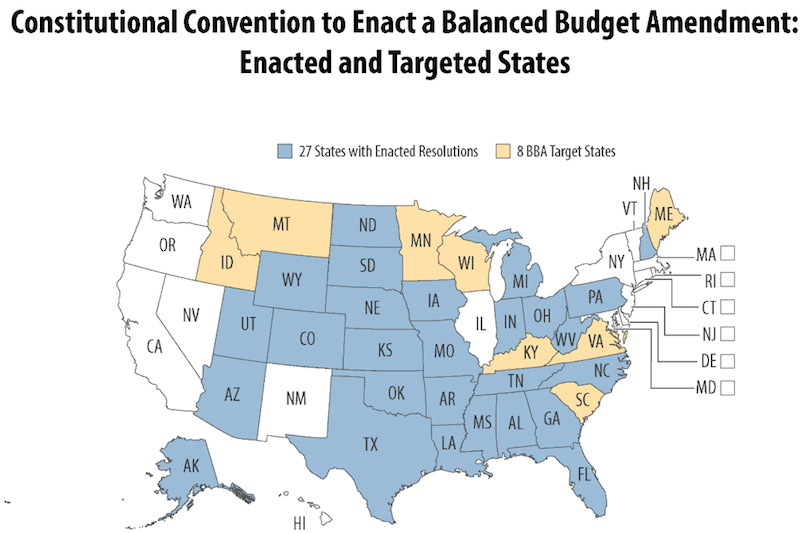 Backers of a balanced budget amendment convention set their sights on at least seven red states this year, but of those, Wisconsin is the only one still in play, with an Assembly vote scheduled for June 14. Growing opposition resulted in the hard-fought defeat of a BBA resolution in Idaho and the tabling of a similar measure in Kentucky.

More than 200 organizations, including the Center for Media and Democracy, signed onto a letter in April 2017 denouncing an Article V convention at this time as "a dangerous threat to the U.S. Constitution, our democracy, and our civil rights and liberties."

In addition, three legislatures rescinded prior convention calls, following Delaware's lead last year. As a result, the number of states with BBA convention calls has dropped by one; passage in Wisconsin would make the year a wash.

The groups behind the convention drive are disappointed but undeterred, and have targeted at least seven states for 2018, (Kentucky, Maine, Minnesota, Montana, South Carolina, Virginia, and Washington).

"With tremendous momentum led by ALEC and other arch-conservative organizations, we started 2017 expecting to see Article V resolutions pass in many states," said Common Cause campaign strategist Jay Riestenberg. "Instead, in this dangerous period of divisive politics, we saw bi-partisan cooperation in several states to protect the Constitution."

"While three states took action to protect our Constitution by rescinding Article V convention resolutions, wealthy special interest groups are still dangerously close to calling a convention that would put everyone's constitutional rights and protections up for grabs," Riestenberg said.

All of the bills are closely tailored to model measures being promoted by the Koch-backed American Legislative Exchange Council (ALEC) and Balanced Budget Amendment Task Force. Funded and controlled by large corporations, including Koch Industries, ExxonMobil, telecom, and tobacco companies, ALEC has supported a BBA since 1995 and renewed its push for a constitutional convention in recent years, publishing an Article V convention handbook for legislators and hosting numerous strategy sessions.

BBA advocates cite "common sense" concerns about "fiscal responsibility," but the rhetoric masks the outright hostility that the Kochs and other billionaire backers have for key federal programs like Social Security, Medicare and Medicaid, and for the regulatory infrastructure that protects consumers and the environment. Prominent economists warn that such an austerity amendment--which would constrain discretionary spending but not tax giveaways for corporations and the wealthy--would have catastrophic results during economic downturns and cripple the federal government's ability to aid states as they deal with the severe impacts of climate change. 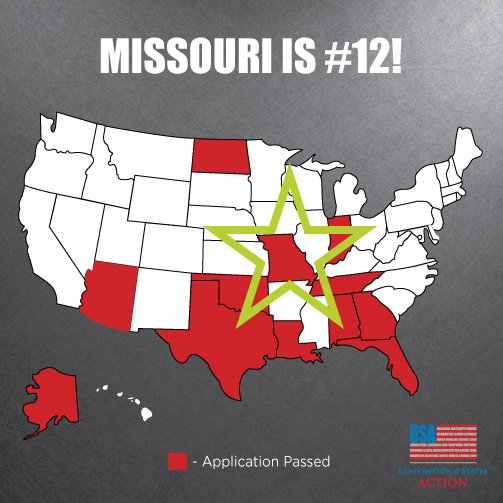 Meanwhile, a faction of the Article V convention crowd seeking a much more radical rewrite of the Constitution made significant gains in 2017. The "Convention of States" (COS) project, run by the Texas-based Citizens for Self Governance, introduced wide-ranging resolutions calling for a broad convention to limit the powers of the federal government in 24 states and won passage in four, Arizona, Missouri, North Dakota, and Texas.

COS, whose budget more than tripled between 2011 and 2015 to $5.7 million, now has a total of 12 states behind its more unlikely, but more dangerous, approach. The group, founded by Tea Party Patriots founder Mark Meckler and Koch-tied dark money man Eric O'Keefe, has received major support from the Koch-linked Donors Trust and backing from ALEC, which has adopted COS’s proposal as a "model" bill. It seeks a constitutional convention to pass any number of amendments designed to limit the powers of the federal government, adopt term limits, and allow states to opt-out of regulations and even Supreme Court decisions they do not like.

The COS strategy, if successful, would radically revise the Constitution's structure of state and federal power sharing in a way that goes to the heart of what it means to be "united states." Most of the states that have passed Convention of State resolutions are in the deep south, prompting some critics to call it the "New Confederacy."

Deep South? Excuse me, but when I last looked at the map (and at the history of the Civil War), Indiana, Arizona and Alaska were about as far removed from the Confederacy as possible, and NONE of these states is calling for secession! If these unnamed "critics" of Article V of our Constitution are trying to marginalize the very process which was CREATED by the Framers themselves, then I think it might be advisable for you to look a little closer at their hidden priorities, and spend a little less time and ink promoting their fallacies.
Right! Our founding fathers designed that the states have all power except that which was GIVEN to the federal gov't. What we see happening is the federal gov't usurping power from the states and dictating to the states what they will or can do. We need to bring the power back to the states as designed by the framers of our great constitution!
Do you really want power such as that turned over to a bunch of corrupt localized institutions that don't listen to the same people in which they govern? Maybe (just maybe) LOOK at the larger context of what you are proposing - and further HOW IT AFFECTS YOU! If you do what you are proposing, you take away your own rights. Just a thought...
We can't see the end from the beginning of the process--we can't predetermine the outcome--but we *can* sit down together from whatever ideological backgrounds are represented, hash out the means to rein in the abuses of the federal government, and then send those one-state-one-vote amendments back to the states for ratification by 3/4's of them. Better this than doing nothing at all on the basis that something worse would happen. "Worse" is happening now. The frog swimming frantically in the increasingly warming pot is nearly dead and doesn't know it.
Why do left-wing writers insist on frightening people? 75%+ approval for whatever is proposed mathematically precludes partisan nonsense from becoming part of the Constitution. What we'll find out, its that everyone (most everyone) agrees that private money in the form of campaign contributions corrupts public policy. Solution: publicly fund elections. foavc.org Arizona has called a planning convention for September 12th in Phoenix.
"Mathematically precludes?" Not at all The eleven most populous states represent 56% of the population.(https://en.wikipedia.org/wiki/List_of_U.S._states_and_territories_by_population) Add state #12, Virginia, at 8.4 million gives a total of 59% of the population of the United States. Thus, the other 41% of the people, through their states, could make odious changes to our country. Check your numbers!
Absolutely! It's the electoral college all over again. A minority of voters undercutting the will of the majority. In the case of the election, we ended with a fascist in the White House. In the case of a constitutional convention in the current political climate -- we can't even imagine the nightmare that could result.
This article is very hyper partisan and slanted. I'm not even going to address the loose Koch ties brought up. You all realize you can push for your own Article V effort right? There's Wolf Pac pushing for a convention to address campaign finance. I imagine the writer and main audience would be all for that. And by all means, you should pursue it and see where it goes. That's the beauty of using the Constitution for reform in government. Whatever reforms being pushed need to have broad appeal to pass ratification - like term limits, and restricting government power. But I guess seeking reform via the Constitution is a bad thing in your view.
Things are now getting interesting. Whether it anyone yet realizes it or not this matter will be concluded one way or another within the next year. At that time a decision will be made whether to continue having the Constitution being the ruling document of this nation or to establish that the Government is enabled to deviate from its provisions. Nearly all the money on both sides of the political aisle is united toward creating deviation. I only wish they took time to consider the consequences of what they desire. But somethings just have to be learned the hard way in human history and I suspect this lesson is going to be one of them.
1 of 3 Having an Article V Constitutional Convention is not what our Founding Fathers wanted. Northern delegates to our first Constitutional Convention voted for Article V at Southern delegates insistence in hopes to appease Southern delegates into approving the final draft of the Constitution. They didn't. During the first Convention there were some calls to adjourn and reorganize into a second Constitutional Convention. James Madison strenuously objected and said so in a letter to George Lee Turberville where he said, “Having witnessed the difficulties and dangers experienced by the first Convention which assembled under every propitious circumstance, I should tremble for the result of a Second.” Instead Madison devised 12 proposed amendments to be introduced by the other Article V means, that is, through the safe mode of amending the Constitution, through Congress.