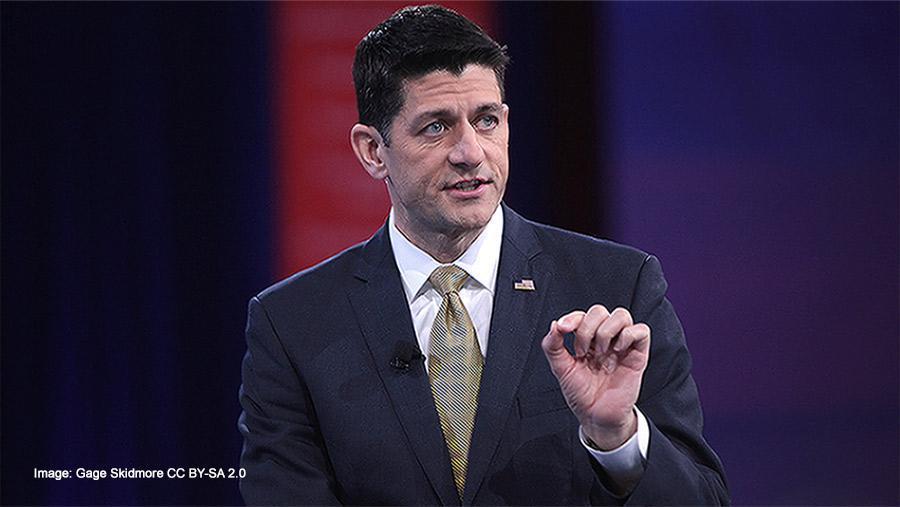 Ryan did a fundraising "physicians and dentist industry" breakfast on February 1 of this year, (here's the invitation obtained exclusively by the Center for Media and Democracy) and the suggested contributions were worth more than a cup of coffee and some scrambled eggs: $10,000 for a "sponsor," $5,000 for a "host," $2,500 for a political action committee, and $1,000 for an individual attendee.

The breakfast was held at a private, members-only establishment for Republicans called the Capitol Hill Club. (The house rules forbid tipping, so here's hoping the medical providers were kind to the staff.)

It's an odd phrase, "physicians and dentist industry," and not just because "physicians" is plural and "dentist" is not. (That's presumably just a clerical error.) Most Americans think of the provision of health care as a profession – a higher calling, even. They don't think of it as an "industry."

But it is, of course. And, like any industry, it has its own financial interests, internal conflicts, and politics. Many healthcare providers are satisfied with government programs like Medicare and the 2010 Affordable Care Act (ACA), and some want to see them expanded. But many others, especially some of those on the higher end of the income spectrum, would benefit financially if these programs were repealed.

That's because these programs don't just provide health insurance coverage to millions of Americans. They also attempt to keep costs under control by restricting the ability of specialists to overtreat patients and overcharge for their services. That's one reason why incoming Health and Human Services Secretary Tom Price – a tea party Republican and an orthopedic surgeon – bitterly opposed a provision of the ACA that tests new kinds of physician payment.

The Centers for Medicare and Medicaid Services (CMS) administers Medicare. Its rules and mechanisms for paying doctors have been widely adopted by private health insurers. Ryan and the House Republicans want to phase out Medicare in its current form and replace it with a voucher program, a move that would effectively gut these payment rules and lead to higher incomes for medical specialists.

It's not surprising that this "industry" got its own breakfast fundraiser with Ryan, since so many of these highly-paid professionals will benefit financially if the GOP repeals the ACA or privatizes Medicare.

Paul Ryan may be sincere in his extremist beliefs. But they haven't hurt his fundraising, either. The Wall Street Journal reports that he raised nearly $90 million in 2016 alone, and that more than $52 million came through Ryan's own political committees. And Ryan raised even more money in January 2017 than he did in January of the previous year.

Know who else wants to eliminate these programs? The Koch Brothers.

As the Center for Media and Democracy has reported, Koch family foundations and Freedom Partners, the "Koch brothers' secret bank," bankrolled practically every "grassroots" group opposing the ACA in order to manufacture a phony "uprising" against expanded health care coverage. Many of these groups including, Heritage Action and the 60 Plus Association, cheered Sen. Ted Cruz when he brought the U.S. government to the brink of default in October 2013 in a stunt to repeal the ACA. The Kochs' astroturf group Americans for Prosperity also spent millions of dollars in the 2012 and 2014 elections trashing "Obamacare" and Democratic candidates who had the temerity to support extending insurance coverage to more Americans.

Why? As the New York Times explained in 2012, the Kochs and their minions "are trying to present the law as a case study in government ineptitude to change the way voters think about the role of government for years to come."

"We have a broader cautionary tale," Tim Phillips, the president of the Kochs' astroturf group Americans for Prosperity told the Times. "The president's out there touting billions of dollars on climate change. We want Americans to think about what they promised with the last social welfare boondoggle and look at what the actual result is."

In other words, the Kochs don't want you to believe that government can work to address problems because they really don't want the government addressing the problem of climate change.

The ACA isn't perfect, but it demonstrated the government's ability to make concrete improvements in people's lives. That is enough to make it a target for Koch attacks, along with successful government programs like Social Security and Medicare.

The Koch Brothers love Paul Ryan nearly as much as they hate government. A 2011 internal email between Wisconsin Americans for Prosperity staff and Tim Phillips, uncovered in the course of an investigation into whether or not Scott Walker was illegally coordinating with dark money groups, put it bluntly:

"… We have one of the brightest and strongest minds in America in Paul Ryan. A poll just released today shows him with an approval rating at 38 percent in his district. While he is doing the heavy lifting for our cause in Washington, we can't let him slip back home. Supporting him through educational efforts across the state will help him and our two vulnerable freshmen members of Congress …"

An interesting memo from an organization that has declared to the IRS that it does not engage in campaigns and elections. The use of the word "educational" doesn't change the fact that this paragraph appears to say that a tax-exempt educational organization is working to re-elect three members of Congress, including Ryan.

The Koch Brothers and their allies are determined to use their billions to permanently change the political landscape. As a Koch operative told the New York Times in 2014,

"We're focused on optimizing our efforts … Being in the field and testing during the slower periods, and in smaller areas, allows you to refine strategy and tactics so that you can make the larger investments with confidence."

Another Koch official added, "What we took from studying it was that we have to have a bigger, more permanent infrastructure on the ground in these states, and this takes time."

It also takes money – lots of money. The Kochs are happy to throw their billions behind politicians like Paul Ryan. They're even happier when they can get a tax break for it.

As for Ryan, one thing is clear: He's determined to raise as much money as possible to fuel his own rise, and his party's, no matter how many people's health may suffer in the process.

CMD's Mary Bottari and Nick Surgey contributed to this article.

I will continue until we win. government did borrow, they did! Here it goes again! Repeal the GPO for Widows and Widowers!! Don't forget the issues of educators and other state/federal retired individuals who are Widows or Widowers and how GPO affects them not receiving earned Social Security benefits that their spouses who passed worked very hard for lots of years!! It is not the same in all the states in the United States of America!! Very unfair practice of old laws!! This is the 21st Century!! This is not right! Widows especially women hurt on this! And many have worked & be a mom. This is not right! It also hurts deaf, blind & Down syndrome! **DON’T DEFUND SOCIAL SECURITY AND MEDICARE —both of these programs are funded 100% by tax deductions from paychecks and have ZERO to do with the national debt. Rich people do not understand poor seniors who do not have many
First of all, if what you are saying is true (it's not) then there is a pretty simple solution, give the tax money you give to social security back, and put that money towards your retirement. Second, you are wrong, Social Security is absolutely funded by debt, there is a massive imbalance in how much is taken vs how much is given. Medicare is also a cash sink, when you have an entire industry fixing prices, then the tax payer gets ripped off if the government doesn't address that before the implementation of medicare. Also, you aren't entitled to other people's money anyway, so your argument is null.
The Koch's brothers have bought the state of Wisconsin they purchased Scott Walker and made sure he was elected as Governor and he has ruined the state public schools and destroyed the university's as far as money goes in the public schools the teacher's are having to buy the things they need for their class rooms or having to ask the parents and in Superior we have a lot of low or 1 parent families who don't have the money to buy school supplies so there are organizations that do donate them Ryan wants to eliminate low income lunches at the elementary level for kids and sometimes that is the only hot meal that get that day but he doesn't care and as far as the universaties go Walker cut a lot of funding so subjects were cut and attentence is down and With Trump and his new immigration laws who knows if the people from other country's will be able to come and go to the state universaties so please vote them out in 2018 along with Sean Duffy
Paul Ryan Why don't all American people have the same health care as congress and the senators? You think your health care plan is the best ever! Come onboard with everyone you are trying to convince your Ryan health care reform is our best solution for all of us! I doubt you will give up your health care coverage for the Ryan healthcare plan you think is so great for us! Go away we are done with you!