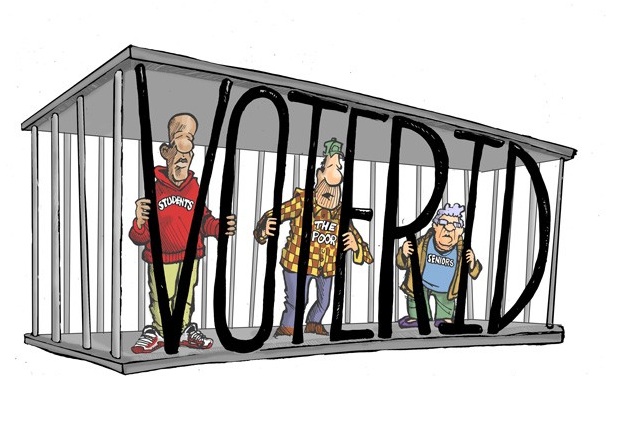 Wisconsin election officials and advocates are being forced to make an "extraordinary effort" to adjust to voter ID restrictions that were just reinstated by a federal appellate court. Thousands of absentee ballots have already been sent to voters, and the majority of Department of Motor Vehicle service centers that issue IDs are only open only two days per week.

Around 300,000 Wisconsin voters don't have the forms of identification required to vote under the law, a disproportionate number of whom are people of color. Opponents of the law have asked the full 7th Circuit to review the September 12 ruling, but if the order stands, all voters will now have to bring identification to the polls, which they have not needed in the past.

With less than 49 days before election day, voting rights advocates will have to work overtime to educate the public and get state-issued IDs into the hands of those who don't have them -- a nearly impossible task, since Department of Motor Vehicle service centers in 48 of Wisconsin's 72 counties are only open two days a week, usually for around five hours each day. This means there are only fourteen days for voters in many counties to obtain an ID card.

State election officials are also in a "pinch," says Government Accountability Board (GAB) director Kevin Kennedy. Poll workers will have to be trained on the law and its requirements, which few had expected to be reinstated this soon before the election. Kennedy says this will require an "extraordinary effort" from state and local election officials.

11,000 absentee ballots without an ID requirement have already been mailed -- and now, election officials will have to contact each absentee voters and tell them they'll need to submit a photocopy of their ID. If they don't, the absentee ballot will not be counted.

For Many Voters, Just 14 Days to Obtain ID

Key to the 7th Circuit's order reinstating voter ID was a last-minute rule issued by the Walker administration the evening before oral argument. The rule provided that the Department of Motor Vehicles would accept a wider range of supporting documents (like baptismal certificates) to obtain an ID card, which the court said "reduces the likelihood of irreparable injury" and limits the law's burden on voters.

Many Wisconsinites will still face enormous difficulties in getting the ID they need to vote, even if the DMV is more lenient in issuing identification cards.

Sixty out of the 90 DMV service centers in Wisconsin are only open part-time, approximately two to three days per week. Ten of those are open only sporadically; at least two won't be open at all before election day.

As the Cap Times notes:

If you live in Fort Atkinson, the local service center in the city building is open from 8:15 a.m. to 4:30 p.m. on the second and fourth Thursday of the month. That leaves three days before the election — Sept. 25, Oct. 9 and Oct. 23 — to appear in person as required to get an ID.

The closest DMV alternatives for Fort Atkinson residents are in Watertown and Janesville, both about 20 miles away.

"If you consider that someone looking to get a valid ID doesn't currently have a valid driver's license, travel could be an issue," the Cap Times noted, in an enormous understatement. Around 257,000 Wisconsinites don't have a car in their household, according to an amicus brief filed by One Wisconsin Now.

"Many Latino and working class voters have two jobs, are raising families, have inflexible schedules or lack cars," said Christine Neumann-Ortiz, Executive Director of Voces de la Frontera, a Latino advocacy organization. Yet if they want to exercise their right to vote, they must take off work and get a ride to a DMV, hopefully during the extremely limited time period it is open.

Latino voters are 2.6 times as likely as white voters to lack the forms of ID required to vote under the law.

"The Department of Motor Vehicles has now become the guardian at the gates of our polling places to determine who has the right to vote," Neumann-Ortiz says.

The 7th Circuit panel did not address the limited hours for Wisconsin DMVs. But they should have considered it.

The panel ignored the evidence before Judge Adelman showing that the burdens on Wisconsin voters are more significant than those that faced Indiana voters in the Crawford case.

Wisconsin has just 90 DMVs, and only 30 are open during regular business hours; Indiana has 140 Bureaus of Motor Vehicles, and nearly all are open full time.

Indiana has 124 BMVs open on the weekend. Wisconsin has only one service center that is open on Saturday, throughout the entire state.

In other words, more Wisconsin voters would need to get ID cards in order to exercise their right to vote than Indiana voters in the Crawford case, and they would have fewer DMVs where they can get that ID.

Based on extensive evidence of the voter ID law's impact on eligible Wisconsin voters, and the lack of evidence of voter fraud in the state, Judge Adelman said he came to a different decision than the U.S. Supreme Court in Crawford. The Republican judges on the 7th Circuit panel ignored that evidence.

The ACLU and the Advancement Project have asked the full 7th Circuit to review the order reinstating the voter ID law.

If voter ID remains in place for November, civic engagement groups will have their work cut out for them in the next seven weeks.

"We are focusing our efforts on empowering, educating, and mobilizing the African-American community to ensure that every single eligible voter in Wisconsin has all the tools they need in order to participate in what is supposed to be a free, fair and accessible democracy," said Mike Wilder, co-chair of the Wisconsin African-American Civic Engagement Roundtable.

The last-minute reinstatement of the law will require advocacy groups to divert resources away from their other activities.

"We must now raise money to pay for educational literature that we did not anticipate, [spend] additional time and training to communicate with voters the new requirements, and overcome yet another hurdle in motivating people to vote," said Neumann-Ortiz.

The voter ID law combines with other recent initiatives that will make it harder to vote.

Earlier this year, Walker signed bills that passed along party lines eliminating early voting on the weekends and cutting hours during the week. This means that more people will be showing up at polling stations on election day, where confusion over the newly reinstated law is likely.

Another measure allows poll observers -- including voter vigilantes like True the Vote -- to effectively hover over voters, and stand as close as 36 inches from the registration table (although polling place inspectors can place poll watchers as far as eight feet away).

The last-minute reinstatement of voter ID could provide more opportunities for vigilante poll watchers to disrupt the election process and challenge voters.

Andrea Kaminski, Executive Director of the League of Women Voters of Wisconsin, said "confusion over the voter ID requirement will be one more issue" they will be watching for on election day. The League "will be watching for signs of people being disenfranchised as a result of confusion, and some other poll watchers will no doubt be challenging voters," she said.

In 2012, Wisconsin ranked among the best in the country for election performance, according to Pew Charitable Trusts.

I need an ID to cash a check. And I work 2 jobs and have to take off to go to DMV anytime to do anything as well - and I am white...so who cares what nationality you are -