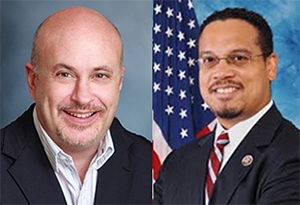 "The right of voting for representatives is the primary right by which other rights are protected," wrote Thomas Paine in 1795.

Yet contrary to popular belief, there is no affirmative right to vote in the U.S. Constitution. This gap in our founding document has provided an opening for the wave of voter suppression measures that swept the country in recent years, and before that, the poll taxes and Jim Crow restrictions that disenfranchised millions. This week, two Congressmen -- both from states at the epicenter of today's voting rights struggles -- are seeking to fix that.

"The right to vote is too important to be left unprotected," said Rep. Mark Pocan of Wisconsin, who is co-sponsoring an amendment to the U.S. Constitution guaranteeing the right to vote.

"Even though the right to vote is the most-mentioned right in the Constitution," added Minnesota Rep. Keith Ellison, the bill's other sponsor, "legislatures across the country have been trying to deny that right to millions of Americans, including in my home state of Minnesota. It's time we made it clear once and for all: every citizen in the United States has a fundamental right to vote."

Under the U.S. Constitution, the Fourteenth and Fifteenth Amendments ensure the vote cannot be denied on the basis of race, the Nineteenth prohibits discrimination based on gender, the Twenty-fourth outlaws the poll tax, and the Twenty-sixth Amendment extends voting to age 18. When the U.S. Constitution was ratified, the franchise was limited to white, property-owning men, and these amendments have edged the document closer to its democratic aspirations.

But beyond those amendments -- and a few federal statutes, like the Voting Rights Act of 1965, which might be neutered by the Supreme Court this term -- the right to vote is mostly a matter of state law. And states in recent years have hardly been careful about protecting access to the ballot box.

After Republicans gained new statehouse majorities in the 2010 elections, a majority of states introduced proposals to enact restrictions on the right to vote. According to the Brennan Center for Justice, 25 laws and 2 executive actions passed in 19 states between 2011 and 2012 to impose strict ID restrictions, or shorten early voting, or limit registration drives, among other measures. More restrictive bills have been proposed in 2013.

Pocan's state, Wisconsin, passed one of the strictest voter ID laws in the country in 2011 after Governor Scott Walker and a GOP-dominated legislature took power. The law threatened to disenfranchise more than 300,000 voters who did not have the required forms of ID, primarily people of color, students, and the elderly. (Like many of the restrictive voter ID laws proposed since 2011, the bill tracked a "model" Voter ID Act from the American Legislative Exchange Council). But just months after Wisconsin's law was enacted, a state court struck down the law based on the Wisconsin Constitution's protections for voting rights.

"Every United States citizen age 18 or older who is a resident of an election district in this state is a qualified elector of that district," the Wisconsin Constitution reads.

Four years earlier, in 2008, the U.S. Supreme Court found that Indiana's relatively similar voter ID law did not violate the U.S. Constitution -- which unlike the Wisconsin Constitution, does not expressly safeguard the right to vote.

Pocan and Ellison are seeking to ensure that citizens across the country can share the voting rights protections that have (so far) been enjoyed by Wisconsin residents.

Pocan: "Our country is at its strongest when everyone participates"

The Pocan/Ellison proposal, if approved by Congress and ratified by two-thirds of state legislatures, would affirmatively guarantee the right to vote, prohibiting not only restrictive ID measures, but also new limits on early voting, and measures to crack down on registration drives or same day registration, and other voter suppression efforts.

The proposed amendment language is simple, yet broad:

SECTION 1: Every citizen of the United States, who is of legal voting age, shall have the fundamental right to vote in any public election held in the jurisdiction in which the citizen resides.

SECTION 2: Congress shall have the power to enforce and implement this article by appropriate legislation.

"At a time when there are far too many efforts to disenfranchise Americans, a voting rights amendment would positively affirm our founding principle that our country is at its strongest when everyone participates," Pocan said Monday at a press conference in the Wisconsin Capital.

"As the world's leading democracy, we must demand of ourselves what we demand of others -- a guaranteed right to vote for all."

The Center for Media and Democracy, publishers of PRwatch.org, has endorsed this proposed amendment.