Same Old Dog and No New Tricks: Update on Messaging on Iran

We know from Scott McClellan, the former White House Spokesman, in his recent book, What Happened, that President Bush insists on discipline in messaging. Although the publics on both sides of the Atlantic have gotten to the point of heavily discounting what he says, the President's desire for control can give us a sense of the thrust of policy. This is certainly true with respect to Iran.

The White House has changed direction on the main sin of Iran in the past few weeks. For almost three months, Iran's most evilness was represented in its involvement in "killing U.S. soldiers" in Iraq. The entire top leadership of the Administration was on this message.

At one point, Admiral Mullen the Chairman of the Joint Chiefs of Staff announced that there would be a major presentation and showing-of-evidence by General Patraeus in Baghdad. We were to see this evidence "next week." That was six weeks ago.
Although we don't know the details yet, it is fairly evident the Iraqi Prime Minister Maliki objected to this line of argument. The U.S. message may have caused the two trips to Iran -- one by an Iraqi delegation and one by Maliki himself. The U.S. position may have pushed Maliki to announce that Iraq would never be used as a launching ground for an attack against another country of the region. 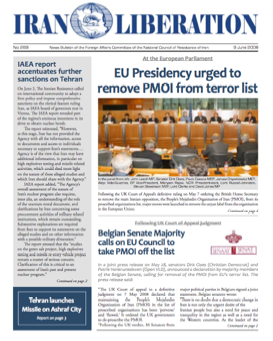 Iraqi objection my have moved the White House into its new theme. Iran is now evil because of its efforts to enrich uranium. In the President's recent trip to Europe he sounded the theme at every stop: Its enrichment and movement toward a bomb. For the most part, European leaders bought into his message.

When the White House does a strategic communications analysis, different audiences are separated for different messages. The evidence of a major U.S. covert operation aimed at destabilizing Iran is strong. The President has adopted a message theme to play to the audience of the people of Iran and support the objective of destabilizing Iran.

This kind of message is very similar to the one meant for the people of Iraq before the 2003 invasion. It's the separation message. The U.S. Government is a friend of the Iranian people. It's only the Government of Iran that is bad.

In the preparation for the invasion of Iraq, the White House kept connections with a wide range of organizations to assist in dominating the message. We are seeing a similar pattern with Iran.

One of the organizations marketing regime change in Iran is the National Council of Resistance of Iran. Probably funded either directly or indirectly by the United States, this London-based expatriate group had a press conference last week in which they revealed the exact locations where the Iranians were making explosive devices that were killing US soldiers in Iraq. The parallels in both shaping intelligence and the message between this group and the Chalabi's Iraqi National Congress are chilling.

Another kind of message affiliate is represented by The Washington Institute for Near East Policy. This is one of those support-Israel-before-you-think think tanks. The week of 17 June, the group will release a study that says that the military option may not be as bad as some have said. We could come to really like the military option.

The messaging affiliates are hard at work. 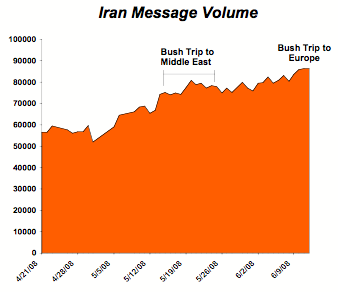 A White House and Pentagon strategic communications consultant spoke at a conference I attended in London in the summer of 2003. He said one of the lessons they learned from Iraq was that you had to put out enough information to dominate the 24-hour news cycle. We have not reached that point yet with Iran, but it is clear the volume is increasing.

The volume of English language articles on Iran has increased by over 50 percent in the past few months. The President has used his trips as a way to magnify the Iran message.

All of this looks and feels like we are being set up for military operations against Iran in the same way we were set up for the invasion of Iraq.

Why in the good name of God you would want to start another war, Don't be so eager to go to war unless you want to go your self. This is about as dumb as when Bush lie to have the US go into Iraq, which I think most of you for got. People have you had enough of killing and blood to last a life time. Don't say that it because of anything they want to do Iran they have a clue about what we could do to them if it came down to it, but why would you want to start something that would get every Muslim nation on us that to me is start something no one can finish. I guess you want to see if nuke's work, as they did when the US Bomb over 100,000.00 in Japan that was a just war. they started it, don't get stupid now that to much of lost of life we are not the only one that have them would you want 100s of thousands of people here to die over something stupid because we refuse to just sit your butts down and talk. Just geting killed over some bull crap? I say No! Work for peace and hope for the best don't forget you and I could be come part of that number of die. Scary yes anyone that has been to war can tell you it's real scary. Not the crap you see on TV they come back in real life you don't. Starting another war will not keep us safe.
You know this assignment writing thread is a few years old and was about adding a link.