The future of New York's water supplies and the health of its millions of citizens hang in the balance as Governor Andrew Cuomo decides whether to end the state's moratorium on new wells to drill for "natural" gas through the controversial industrial process of hydraulic fracturing or "fracking." Activists estimated that over two thousand concerned citizens joined the march in Albany Monday to try to persuade Cuomo not to lift the moratorium -- statewide or in some counties -- a decision expected to be announced some time after Labor Day.

The process of fracking involves pumping large quantities of fresh water, along with chemicals and sand, into shale formations in order to crack the rock and extract gas. The "proprietary" blend of chemicals used by corporations in this process is largely kept hidden from the public, but the formulae that have been analyzed have been revealed to contain numerous toxic substances, including known carcinogens and volatile organic compounds (VOCs).

Fracking has the documented potential to contaminate drinking water sources, and has been shown to contaminate both water and land -- in addition to spoiling millions of gallons of fresh water as part of the drilling process. Fracking has rapidly expanded across the U.S. as new technology has allowed the drilling to cost companies less money, plus the relative lack of regulation has also allowed corporations to tap some aquifers and rivers without paying any usage fees, and some drillers cheaply "dispose" of the resulting contaminated water by injecting it into the ground, a practice that a new study suggests can cause earthquakes. New York has been heavily targeted by the industry because the state sits atop a piece of the Marcellus Shale formation. 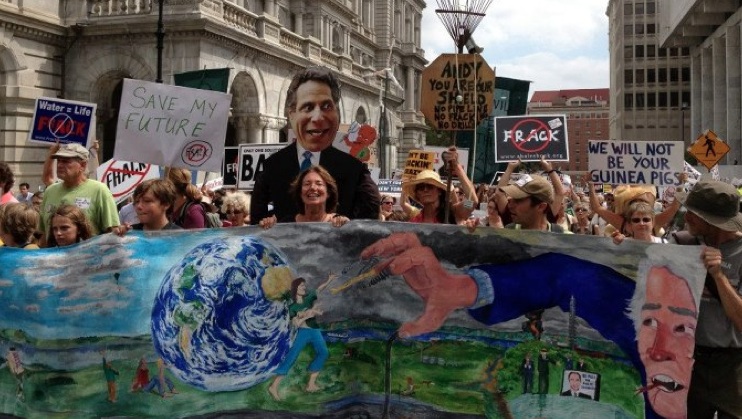 As part of a growing global resistance movement to fracking, New Yorkers marched Monday to the state capitol building and the New York Department of Environmental Conservation (DEC). Protestors also delivered a pledge, signed by thousands, calling for a ban to fracking in New York. The pledge -- which noted that any approval of fracking would go against the advice of numerous scientists, economists, and medical professionals -- stated that the risks associated with fracking cannot be mitigated through regulation. Those who signed the pledge promised to engage in non-violent acts of protest in the event that the Cuomo's administration allows new wells to be fracked in the state.

The expected decision from state officials will conclude a regulatory and environmental review, which has been heavily criticized by state residents who accuse government regulators of having an overly cozy relationship with the gas industry. One example of this collusion came from emails obtained by the Environmental Working Group (EWG), which found that the New York Department of Environmental Conservation gave the industry early access to a set of proposed permit and regulations for fracking last year, access that was not given to the general public to weigh in on and help shape.

In an article by a local news outlet, an industry spokesperson, John Conrad, labeled Monday's protestors as part of an "extreme fringe." Conrad operates a consulting firm, Conrad Geoscience Corp., and is a member of the "Independent Oil and Gas Association of New York." 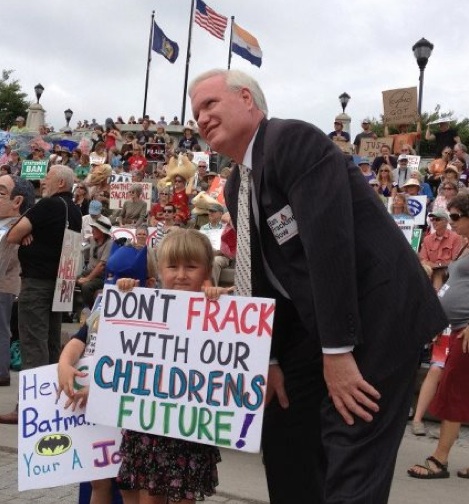 New York state Sen. Tony Avella, who has pushed for a ban on fracking in the Empire State, told the Center for Media and Democracy that Conrad's claim was "laughable" and that there "is nothing fringe about the everyday citizens, neighbors, farmers, scientists and environmentalists" who have expressed their legitimate concerns about fracking.

John Armstrong, of the organization "Frack Action," one of the 60-some organizations that organized the demonstration, said that the state's review has neglected to take into account independent reviews of the environmental and health risks that fracking poses. "There is nothing radical about citizens aligning themselves with groups like the New York Breast Cancer Network and American Nurses Association, some of the major groups which have come out against fracking," he said.

The protest, which included street theatre and an effigy of Cuomo with an angel and devil on either shoulder, came on the heels of other recent demonstrations directed at the governor. Hundreds of concerned residents showed up at a policy summit Cuomo recently held in New York City and at "Governor's Day" at the State Fair, both last week.

As the gas industry touts the number of jobs it claims it will create in New York, in neighboring Pennsylvania an estimated 70 percent of gas rig jobs are going to people from out of state, according to Laura Fisher, senior vice president of the Allegheny Conference on Community Development.

But with its deep pockets, the industry has been able to push its talking points not just on its economic claims but also on its assertion that fracking is "clean" and "safe." One of the ways they have done this is through Energy in Depth (EID), a front group for gas companies that is connected to the "American Petroleum Institute" and the "Independent Petroleum Association of America." 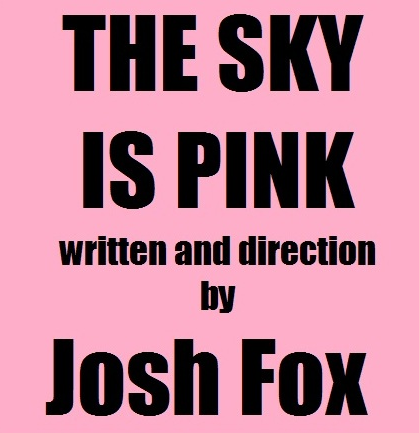 As documented by blogger Dory Hippauf, EID consists of several interrelated fronts in several states, with ties to various PR firms, gas companies, and political lobbyists. The group has worked extensively to try discredit those who express concerns about fracking, which has included targeting the New York Times and the Oscar-nominated documentary film "Gasland," and its director Josh Fox.

Fox recently released a new short film that exposes oil and gas industry internal documents which show that some companies have privately expressed concerns about well safety and water contamination, despite the industry's PR campaign to claim the public's concerns are misplaced. In response, EID attacked the film, but failed to address the leaked documents. Fox has compared EID to an "attack dog" that "drank too much Red Bull." Fox was at Monday's rally, along with other well-known individuals such as environmentalist Bill McKibben and actress Debra Winger. 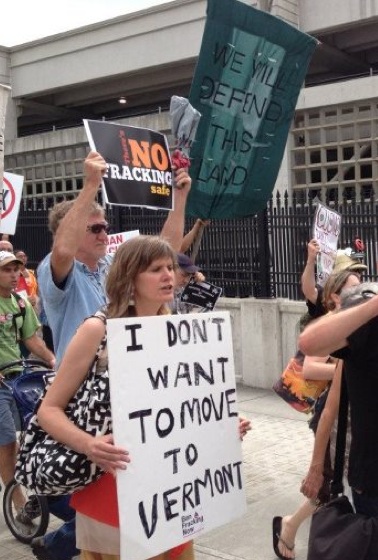 EID's tactics in its efforts to discredit concerned citizens were highlighted by one of the speakers at the rally, acclaimed author and ecologist Sandra Steingraber who has been a leading voice on the risks that fracking presents to New York communities. In its blogs, EID has made personal attacks on Steingraber, for example, calling her the "most emotional of all anti-natural gas opponents on the battlefield," and commenting on her prior cancer diagnosis, the fact that she wears makeup, and the size of her home, as well as mocking her last name, in addition to other comments irrelevant to the scientific studies she uses to defend her concerns about fracking.

"Hey, gas industry: I am not afraid of you. And that's not because I'm fearless. It's because I am so scared for the future of my children on a fracked-up planet that I have no fear left over for you," Steingraber said.

In her speech, Steingraber called the growing resistance towards fracking the "greatest human rights movement in New York State since abolition and suffrage" and said that "I choose to believe in a vision of an unfractured New York that turns its back on nineteenth-century thinking and fossil fuels and leads the world in the creation of a clean energy economy." Sandra held a sign made by her son which read "I Don't Want to Move to Vermont," a neighboring state that has banned fracking, like Bulgaria and France. Steingraber is author of "Raising Elijah: Protecting Our Children in an Age of Environmental Crisis."

Resistance to Fracking Is Growing and Some Turn to Direct Action

Monday's demonstration in Albany is part of a widespread, global movement against fracking that is gaining momentum. In June, Pennsylvania citizens occupied a mobile home camp to temporarily stave off eviction of families that were told their land was being sold to a private water corporation which will pump millions of gallons of water from the Susquehanna River to be used in fracking. In July, Ohio citizens blocked access to a fracking injection well, shortly after 1,000 gallons of chemical-laden fracking wastewater spilled along five miles of road in a nearby residential area. In the same month that activists blockaded entry to a drill site in a Pennsylvania state forest, UK residents chained themselves to the fence surrounding an exploratory drilling site in Chesterfield, among other actions. 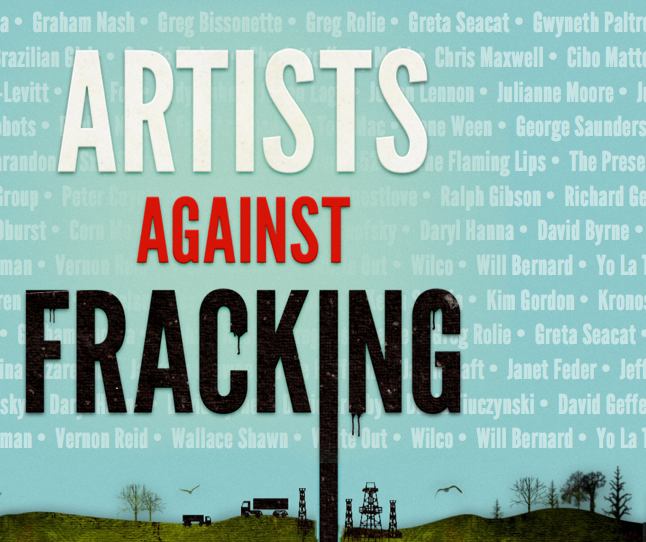 This summer, Yoko Ono and Sean Lennon also launched "Artists Against Fracking," which includes over 130 artist who have called on Cuomo to ban fracking, including Leonardo DiCaprio, Julianne Moore, Alec Baldwin, Lady Gaga, Zooey Deschanel, The Strokes, The Flaming Lips and Beastie Boys.

In an op-ed published in the New York Times Tuesday, Lennon highlights the disinformation campaign funded by the oil and gas industry, noting that America's Natural Gas Alliance has spent $80 million in PR campaign that includes the help of Hill and Knowlton, a PR firm that in the 1950s and 1960s tried to convince Americans that tobacco had no links to cancer.

"Natural gas has been sold as clean energy. But when the gas comes from fracturing bedrock with about five million gallons of toxic water per well, the word 'clean' takes on a disturbingly Orwellian tone. Don't be fooled. Fracking for shale gas is in truth dirty energy. It inevitably leaks toxic chemicals into the air and water. Industry studies show that 5 percent of wells can leak immediately, and 60 percent over 30 years. There is no such thing as pipes and concrete that won't eventually break down. It releases a cocktail of chemicals from a menu of more than 600 toxic substances, climate-changing methane, radium and, of course, uranium," Lennon said in his op-ed titled "Destroying Precious Land for Gas."

The Possibility of Political Consequences for Giving In to the Industry 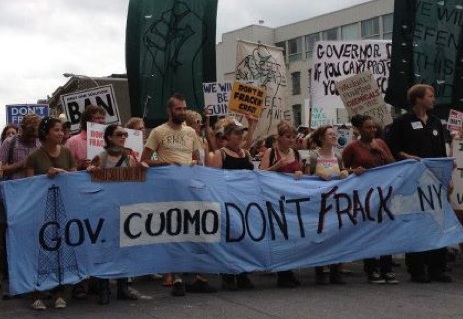 According to one of the organizers of Monday's demonstration in New York, Corinne Rosen with Food and Water Watch, fracking fluid and its waste are not only laden with toxics but a decision by the governor to approve fracking in the state could be toxic to Cuomo's reputation, who is an otherwise generally popular governor.

"People are going to hold the governor accountable for this decision. The fact that he sees people coming to these rallies, and calling his office may be why the decision has not yet been made," Rosen said. "You see regular New Yorkers, who might not be typically involved in these types of issues, standing up because the health of their families is at stake."

Stop Fracking....Start Voting for Real Change ie the Green Party and it New Green Deal. Jill Stein and Cheryl Honkala for President and Vice President Otherwise you will not see Cuomo in New York but maneauvering his way to the 2016 Presidency.
I can't wait for this "moron"-torium to be removed. I was wondering if Times Square novelty stores sell caricatures of "Liberal Bubble Heads." Right! Let's pay more for our fuel, gasoline, diesel, oil and natural gas. Can't wait for that 5.00 per gallon rates to arrive. You can just purchase another 40k "hybrid." Hey remember Shoreham Nuclear Plant? No plant for Long Islanders... keep those utility prices high, tear it down, they'll pay for it because they are "environmentalists." How many billions was that thrown down-the-sewer? Than Lilco morphs into LIPO. Gee who did that? Was that Daddy C? You bet. Now the Governor conveniently forgets that he oversees LIPO (it reports to him) and then complains about "misfeasance" blaming management to oversee them by spending more of our tax money. Hey...you all voted for him. "Touchy-feelies." Maybe you can get your hybrids to run on non-fat yogurt.