Last week, Patrick Marley of the Milwaukee Journal-Sentinel reported that State Supreme Court Justice Gableman had been represented for free by law firm Michael Best & Friedrich in an ethics case. Gableman retained the firm in 2008 after being charged with ethical violations by the Wisconsin Judicial Commission, which accused him of lying in a campaign ad.

Michael Best attorney Eric McLeod defended Gableman against the ethics charges and also assisted in the defense of Governor Walker's collective bargaining law, which the state Supreme Court upheld with a single vote in a controversial June decision. Gableman voted with the majority in the 4-3 decision.

The firm has not stated the value of its work for Gableman, but charged charged taxpayers between $275 and $300 per hour for its work defending the Walker bill. Other attorneys have said Gableman's representation was likely worth tens of thousands of dollars.

Conflicts, impartiality, and the perception of unfairness 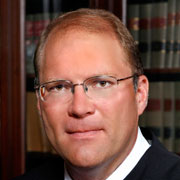 According to the Milwaukee Journal-Sentinel, "since the firm started representing Gableman in the ethics case in July 2008, Gableman has participated in nine cases in which the court voted on substantive issues involving Michael Best clients. Gableman ruled in those clients' favor in five of those cases - more than any other justice. In a tenth case, Gableman recused himself. In that matter, Michael Best itself was sued, making the firm a party to the case, rather than just a firm representing clients."

Legal ethics experts consulted by the newspaper said that Gableman should have recused himself from cases involving Michael Best, particularly cases involving McLeod, because his impartiality could reasonably be questioned.

"A reasonable perception would be, 'This guy owes him one,'" said Charles Geye, a professor at the University of Indiana-Bloomington law school. "When you're talking about tens of thousands of dollars (in a case) that is that important to the judge, it certainly raises some concern."

The Wisconsin Code of Judicial Conduct provides that a judge must recuse when he or she knows the facts and circumstances "raise reasonable question of the judge's ability to act impartially." Despite this, under Wisconsin law the decision whether to hear a case is left solely to the justice.*

Dane County District Attorney Ismael Ozanne, who originally brought the collective bargaining law challenge, has indicated he may ask the court to re-open the case. The Supreme Court's 4-3 decision in favor of the collective bargaining limits overturned a lower court decision by Judge Maryann Sumi, who held that the law was invalid because legislators violated the state Open Meetings law when passing it. If the case is re-heard without Gableman's participation, the court would likely deadlock 3-3 and Judge Sumi's ruling would stand.

During his 2008 election campaign Gableman approved and ran a misleading ad accusing incumbent Justice Louis Butler of finding a "loophole" two decades earlier when he worked for the state as a Public Defender. Butler had been assigned to represent child sex offender Reuben Lee Mitchell.

"Butler found a loophole. Mitchell went on to molest another child. Can Wisconsin families feel safe with Louis Butler on the Supreme Court?" said Gableman's ad.

What really happened is that Butler, whose legal and ethical obligation as a public defender was to mount a vigorous defense, argued that Mitchell's original conviction should be reversed because evidence was improperly admitted at trial. An appeals court agreed with Butler's legal arguments, but the state Supreme Court ruled the evidentiary error was not significant enough to overturn Mitchell's conviction. Mitchell served out his sentence, then committed another crime after he was released.

Gableman narrowly won the election 51%-49%, unseating the first African-American justice in state history. It was the first time an incumbent Wisconsin Supreme Court Justice lost in over 40 years.

The state Judicial Commission said Gableman's ad was misleading -- Butler's defense did not result in Mitchell's release from prison, and had nothing to do with the later crime -- and brought formal ethics charges after Gableman won the election. The new justice hired Michael Best & Friedrich, along with right-wing activist lawyer Jim Bopp, to argue the ad's misleading statements were protected by the First Amendment. The Supreme Court justices split 3-3 along ideological lines in June 2010, and the Judicial Commission suspended the charges because of that deadlock.

Gableman's attorney Eric McLeod told the Journal-Sentinel they had agreed Michael Best would only be paid if Gableman won and the state agreed to reimburse his legal expenses. Because the case was suspended rather than resolved, the firm did not charge Gableman for the representation. 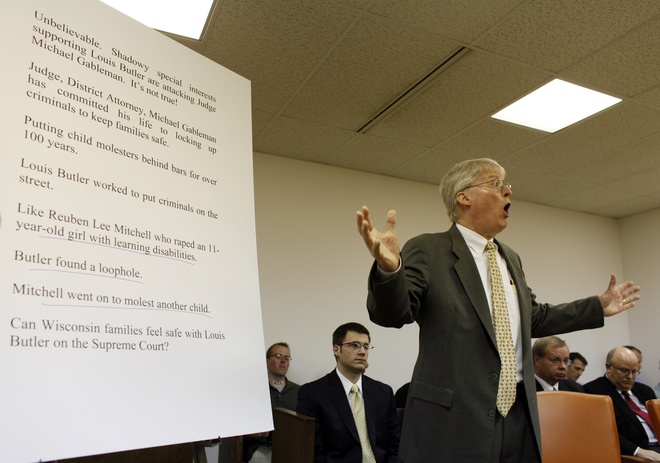 Bopp would not disclose whether he was paid for representing Gableman. The Indiana-based attorney has made a career out of advancing an extreme interpretation of the First Amendment to attack fair and open election laws, and applied similar reasoning in his 2008 defense of Gableman. Bopp argued that the First Amendment does not allow courts to regulate the inferences viewers may draw from misleading ads. "I don't think misleading is something good, (but) it can't be sanctioned," he said.

The Wisconsin Rules of Professional Conduct for Attorneys provides that it is "professional misconduct" to "engage in conduct involving dishonesty, fraud, deceit or misrepresentation." But, Bopp essentially argued that Gableman had a constitutional right to deceive the Wisconsin electorate.

According to the New York Times, Bopp was also the driving force behind the controversial Citizens United v. F.E.C. case, which also advanced a radical interpretation of the First Amendment. In that case, five judges on the U.S. Supreme Court took the notion that money is "speech" and corporations "people" to a new level, declaring that the First Amendment prohibited Congress from limiting corporate spending on elections through so-called "independent expenditures."

Bopp's particularly zealous defense of the new justice helped lead to a perception that Gableman was biased against criminal defendants. During oral arguments Bopp made statements like, "would you feel safe having somebody on the Supreme Court that is willing to find a loophole for a scum bag like Reuben Lee Mitchell?" In 2009, eight defendants alleged the misleading ads and Gableman's defense of those ads expressed his bias against criminal defendants and defense attorneys.

"Justice Gableman apparently believes that at least some defendants are appropriately condemned without representation, or trial, appeal or other unbiased process," wrote Father Greg O'Meara, a Marquette University Law School assistant professor and chairman of the bar's criminal law section. "Such comments pose a serious threat to the perception, if not the reality, of fairness and neutrality of the court."

Gableman is not the only justice who has been accused of conflicts-of-interest.

Justice Annette Ziegler came under fire in 2007 for staying on a case important to the state's business lobby, Wisconsin Manufacturers and Commerce (WMC), which spent $2 million on ads and other "independent expenditures" to help get her elected.

Earlier this year, Justice David Prosser unexpectedly recused himself from a case based on a conflict-of-interest similar to the one currently faced by Gableman -- his close relationship with one of the law firms involved in the litigation. The Troupis Law Office had represented Prosser's campaign during the recount following the 2011 supreme court election. At the same time the firm was representing Americans for Prosperity and other Tea Party groups in a challenge to fair election laws (which were written to respond in part to the Citizens United decision), which was heard by the Supreme Court a few months later. Prosser initially indicated he would stay on the case, but after a barrage of press about the potential conflict of interest, he stepped down at the 11th hour. (CMD filed a friend-of-court brief in this case defending the election transparency rules; Bopp also represented a group filing a brief, but opposing the disclosure rules).

On Tuesday, the group filed a complaint asking that the Judicial Commission investigate Gableman. As was the case during the 2008 ethics charges against Gableman, if the Commission files charges, the other six justices on the Supreme Court will decide whether there was wrongdoing.

*Update 4pm: the article originally stated a majority of justices could vote to force a recusal, but the Wisconsin Supreme Court ruled in July that the decision whether to hear a case rests solely with the justice.

The Michel Best firm and attorney, Eric McLeod has now been involved in the sketchy Gableman case, was assigned to the judicial selection committee, and was involved in drawing republican friendly districts. Big party RNC bosses reviewed districts prior to approval. Very suspect. Why would McLeod be on the Judiciary review committee when the Gableman case is technically not closed? It looks like a lot more dots might need to be connected. http://www.politiscoop.com/us-politics/wisconsin-politics/639-walkers-republican-party-worked-in-conjunction-with-big-party-bosses-.html