It Was a Very False Year: The 2005 Falsies Awards | PR Watch

It Was a Very False Year: The 2005 Falsies Awards

Then there were the public relations campaigns that sought to redefine reality itself. The oil and nuclear industries could be greenwashed! Rights-abusing governments and labor-abusing companies could be whitewashed! Junk food companies could be nutriwashed and genetically-modified foods poorwashed! The only limitations were PR flacks' imaginations -- and their expense accounts.

Viewed in sum, the extensive pollution of last year's information environment could either make you cynical or have you convinced that two plus two really does equal five.

Here at the Center for Media and Democracy, we realized that sorting through a year's worth of outrageous spin to bestow this year's Falsies Awards was no small task. We asked our readers for help, and 846 people answered the call, filling out our Falsies Awards Survey.

Here, then, are the winners of the second annual Center for Media and Democracy Falsies Awards, followed by our Readers' Choice Falsies. Lastly, we recognize groups and individuals who used information, reason, independent media and community organizing to counter 2005's flack attacks with the Center's first ever Win Against Spin Awards.

And the Falsies Awards Winners Are...

The coveted Gold Falsies Award of 2005 goes to the video news release industry (with a nod to their accomplices in television newsrooms).

In March, the New York Times reported, "At least 20 federal agencies, including the Defense Department and the Census Bureau, have made and distributed hundreds of television news segments in the past four years. ... Many were subsequently broadcast on local stations across the country without any acknowledgment of the government's role." Video and radio segments from the U.S. Agriculture Department's Broadcast Media & Technology Center, which the Times called "one of the most effective public relations operations inside the federal government," are very one-sided. A Center for Media and Democracy review found pieces deriding public safety concerns about mad cow disease as "nothing but media hype" and promoting the Central American Free Trade Agreement as "very good for agriculture." 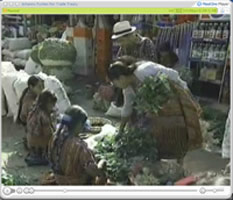 It does make a twisted sort of sense, though. These video news releases (VNRs) and audio news releases (ANRs) are produced by public relations firms (or PR staff within companies or government agencies) to advance a client's agenda. They're just like advertisements -- except that listeners or viewers think they're independently-reported news segments. Too bad for them, but it's great propaganda for the corporate and government entities behind the fake news. Everyone knows that ads lie, but who would guess that a report on a company was actually produced by that company?

Contrary to popular belief, the vast majority of fake news comes from companies, not governments. During a March teleconference of public relations executives, the CEO of Medialink, one of the largest VNR companies, cautioned his peers, "Let's remember this debate, from everything I've seen, read, heard, and talked to, is purely the government. ... I don't hear anybody issuing a healing cry over the stuff that we do day-in and day-out; it's really government. And I'm glad the story is kind of focused there, because I would hate to see it broaden." Sure thing, Larry -- we won't tell a soul!

The Silver Falsies Award goes to the mainstream media and the Bush administration, for "Not Counting the Dead."

In March, a survey of more than 200 U.S. media personnel by American University's School of Communications found that "many media outlets self-censored their reporting on Iraq," often out of fear of offending their audience. One participant in the survey wrote, "The real damage of war on the civilian population was uniformly omitted." Indeed, U.S. media ignored or downplayed an October 2004 medical study that estimated nearly 100,000 Iraqi civilians had died since the U.S. invasion. The study, which erred on the side of caution by leaving Fallujah's high mortality rates out of its final projections, was widely praised by public health professionals.

In October, the Pentagon began periodically releasing "enemy body counts ... to show the impact of some counterinsurgency operations" in Iraq, reported the Washington Post. In response to a question at a December talk, President Bush broke his silence on civilian casualties to say that "30,000 Iraqis, more or less, have died as a result of the initial incursion and the ongoing violence." This newfound candor came as Bush's approval ratings for "handling his job, Iraq, terrorism and the economy" were "all at career-lows," according to ABC News polls. Bush's lowball estimation of civilian deaths was welcomed as "a more realistic tone" by international media and was quickly overshadowed by Iraq's parliamentary elections, held just days later.

The debate about Iraqi civilian casualties mirrors earlier, and similarly marginalized, questions about civilian deaths following the 2001 U.S. invasion of Afghanistan. Based on multiple news reports of each casualty, U.S. academic Mark Herold arrived at a conservative estimate of 3,767 Afghan civilians killed by December 2001. Yet U.S. military operations there continued in 2005. Human Rights Watch also claims that U.S. arrest and detention practices are "endangering the lives of Afghan civilians" and "undermining efforts to restore the rule of law in Afghanistan." But what do they know about, um, human rights?

The Bronze Falsies Award goes to the U.S. military and their public relations contractors, for "Spinning Wars and PsyOps."

In January, the Pentagon increased media training for forces going to Iraq, making "one or two hours of briefings by public-affairs specialists" mandatory for Army troops, and distributing wallet-sized "talking point" cards to soldiers. One talking point was, "We are not an occupying force," reported the North Carolina News & Observer.

Apparently, U.S. officials spent much of 2005 in linguistic debates. Initially, opponents in Iraq were called "dead-enders" or "Baathist holdouts." When the dead end started looking more like a long slog, they became "former regime loyalists." That changed to "former regime elements," to avoid the positive connotations of the word "loyalty." In November, Defense Secretary Donald Rumsfeld had "an epiphany." "This is a group of people who don't merit the word 'insurgency,'" he said, since that implies that they have "a legitimate gripe." (Remember, there are no occupying forces in Iraq.) Rumsfeld's half-joking re-re-re-naming suggestion was "enemies of the legitimate Iraqi government." 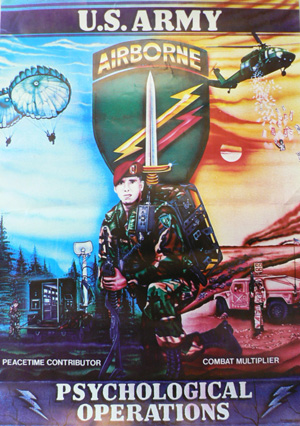 In June, the Pentagon awarded up to $300 million over five years to SYColeman, Inc., Lincoln Group and Science Applications International Corporation, to "inject more creativity into ... psychological operations efforts to improve foreign public opinion about the United States, particularly the military," reported the Washington Post. At the time, the military contractors' work was described as developing "radio and television spots, documentaries, or even text messages, pop-up ads on the Internet, podcasting, billboards or novelty items."

That could be accurate -- if Pentagon officials consider foreign news media to be novelty items. ("Happy birthday! Put on your Al Jazeera party hat!") In November, the Los Angeles Times outed the Lincoln Group for covertly paying Iraqi newspapers to print stories written by U.S. information operations forces. The planted stories were described as "basically factual," although -- like their VNR and ANR cousins -- they presented "only one side of events." But in December, strategy documents obtained by ABC News suggested that the Lincoln Group's description of the November 2004 assault on Fallujah as a joint Iraqi and U.S. military operation was inaccurate. "Marines and reporters said the Iraqis were only minimally involved," reported ABC.

In October, President Bush held a videoconference with U.S. soldiers stationed in Iraq that was billed as a "back-and-forth with the troops." However, a premature satellite feed showed Allison Barber, a senior Pentagon official and former president of the PR firm Sodenta, rehearsing the "spontaneous" conversation with the soldiers. Oops! One of the Iraq troops presented as someone with on-the-ground knowledge, Master Sgt. Corine Lombardo, was also a flack. According to David Axe, who reported from Iraq for the Village Voice, Lombardo's "job when I was with the 42nd Infantry Division included taking reporters to lunch. She lives in a fortified compound in Tikrit and rarely leaves."

The same month, U.S. Representative and former House Majority Leader Tom DeLay reported to the Harris County, Texas sheriff's office after being indicted for campaign finance conspiracy and money laundering. He was fingerprinted and posted a $10,000 bond, but, apparently, he felt great. In his mug shot, DeLay grinned widely, wearing a dapper suit with his House pin on the lapel. Also unlike your typical mug shot, the picture did not include booking information. Reporters conjectured that DeLay's advisors "urged him to grin so that Democrats won't be able to use a dour mug shot in future ad campaigns," according to Slate. But maybe DeLay follows the advice of Billy Crystal's Saturday Night Live character, Fernando: "It's not how you feel; it's how you look. And you look mah-velous!"

And the Readers' Choice Falsies Winners Are...

Many of our readers sent in their own Falsies Awards nominations. Some were for groups, people or trends whose spinning ways the Center for Media and Democracy has been tracking for some time. For instance:

Other readers urged the Center for Media and Democracy to adopt a more global approach to the Falsies Awards. International nominees of note include:

And the Win Against Spin Awards Winners Are...

The public relations industry is pervasive, well-funded and highly skilled -- but not insurmountable. Indeed, the Center for Media and Democracy was founded because deceptive PR only works when it remains unquestioned. Once exposed to public scrutiny, front groups, hollow claims and other media perversions lose their power. Then, debates on important issues can take place on a more level playing ground.

For their work to overcome misleading spin and reclaim the media, the following groups and people earned the Center's 2005 Win Against Spin Awards:

Yes, saccharin video-boilerplate ground out in the name of heartless corporate entities is both insulting, and intentionally deceptive, but let's not forget that the production houses specializing in such fare have been schooled by long association, with the so-called "progressive movement", which I see as nothing more than a worldwide cooperative creative effort to 'worry-spin' practically the entirety of modern life. Trad religions and ethical codes might be chock full of tabu, covert domination, outright nonsense, and Xenophobia, but at least they bound their area of outreach, and tacitly admit they are "just for us" belief systems. This Prog-Mov spin juggernaut, however, assumes the mantle of '1000% unadulterated truth and ethical superiority, guaranteed', as if the angry little hacks & flacks of the ProgMov were somehow endowed by their anti-everything stance with godlike prescience, infallibly insightful as to everybody's covert agendae--save their own. Face it, the ProgMov these days is full of (gasp!) Corporations, too! So when Riverkeeper floats yellow toy ducks on the Hudson river, why do they not win a "Falsie", for the toys are obviously not news, nor is their mis-information dirge even technically accurate? Let me tell you why. PRwatch is not named in a forthright manner. RightWing+CorporatePRwatch would be more apt. LeftwingPRnonsenseWatch is another, as yet unincorporated organization, and I don't expect you guys to take up its duties,but by failing to limit your name to your obvious political preference, you laughably practice what you excoriate--- a cute little media deception. But don't worry, I'm here now, to help you try to be ethical. Have a nice movement day. Regelthustra