Bee populations have been declining rapidly worldwide in recent years -- in the U.S., they have declined by almost 50 percent just since October 2012, according to The Ecologist. The problem is complex, with possible culprits including certain parasites (like Varroa mites), viruses, pesticides, and industrial agriculture. But two studies published in early 2012 in the journal Science suggested a particularly strong connection between the use of a class of pesticides called neonicotinoids and the decline of both bumble bee and honeybee populations. 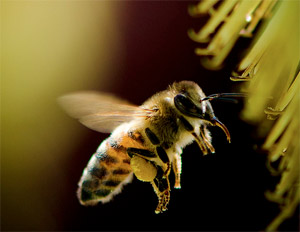 These and other studies led the European Food Safety Authority (EFSA) to recommend a two-year ban of the most controversial neonicotinoids by the European Commission: thiamethoxam, manufactured by Swiss company Syngenta; and imidacloprid and clothianidin, manufactured by German company Bayer. Private letters recently obtained and released by Corporate Europe Observatory (CEO) reveal that Bayer and Syngenta have engaged in furious lobbying against these measures. So far, the proposed partial ban has failed to reach a qualified majority of member states in the Standing Committee on the Food Chain and Animal Health.

(Readers may recall that the Center for Media and Democracy reported in 2012 that Syngenta's PR team investigated the press and spent millions to spin news coverage in the face of growing concerns about potential health risks from its widely used weed-killer products containing atrazine.)

Anatomy of a Neurotoxin: Neonicotinoid Pesticides

Neonicotinoid insecticides have been used for years on corn, soy, wheat, and canola (called rapeseed in Canada and Europe). When they were introduced in the 1990s, they were initially welcomed as much safer for humans, livestock and birds than other insecticides. Their most common use is as a seed treatment. Since they are a systemic pesticide, from the seed they enter each part of the growing plant, including the pollen. According to the Pesticide Action Network of North America (PANNA), 94 percent of U.S. corn seeds are treated with either imidacloprid or clothianidin. That makes nicotinoids remarkably prevalent in pollen collected by bees.

Dave Goulson, professor of biology at the University of Sussex, was one of the authors of the spring 2012 Science study on neonicotinoids and bumble bees. In the study, scientists exposed bumble bee colonies to the neonicotinoid imidacloprid. Compared to control colonies, treated colonies "had a significantly reduced growth rate and suffered an 85% reduction in production of queens..." Dr. Goulson told CMD:

"Exposure to these pesticides, which are essentially a neurotoxin, was affecting the ability of the bees to learn, to find their way home, to navigate, to collect food, and so on, which is hardly surprising if you realize they're neurotoxins. ... What we found, which was I must admit surprising in its extent, was that the treated nests did grow more slowly, but most dramatically, the effect on queen production was really strong. So we had an 85 percent drop in queen production of nests that were exposed just for that two-week period to pretty low concentrations of these pesticides compared to the control nests."

Results of the honeybee study published in the same issue were similar: honeybee foragers got lost on their way back to hives after exposure to low doses of neonicotinoids.

Earlier scientific studies had already induced Italy, Slovenia, and Germany to suspend approval of new neonicotinoid-treated seeds and ban certain uses of the pesticides. Then in March 2012, the European Commission mandated EFSA to deliver a scientific opinion on the report that had led to Italy's suspension of neonicotinoid-treated corn seeds. After the April 2012 publication of the Science articles, the Commission asked EFSA to include them in its review. In June 2012, the French government announced that it would withdraw the registration of thiamethoxam.

The response of Bayer and Syngenta was to unleash a barrage of letters to the food safety agency and the European Commission, followed later by threatened lawsuits. As CEO reported, the two companies made the following increasingly shrill arguments against the proposed partial ban: that past incidents of pesticide poisoning of honeybees were farmers' fault, not the products'; that member states that had limited use of neonicotinoids were "driven by a small group of activists and hobby beekeepers"; that the pesticide company is an important contributor to global food security and committed to spending money in Africa; that the agency was at risk of coming to "wrong conclusions from a rushed process that could have disastrous implications for agriculture and ironically for bee health"; that "independent" analysis shows that Europe can't survive without neonicotinoids; etc.

Eventually, when EFSA concluded that it recommended the pesticides be banned and sent Syngenta an embargoed press release with its findings, the company claimed there were inaccuracies, threatened to "consider our legal options" if the release was not changed by a deadline set by Syngenta. Then, when the release was published without the company's suggested changes, demanded access to all documents related to the drafting of the press release "and in particular the name(s) of the civil servant(s) responsible for the decision to publish the Press Release setting aside Syngenta's comments."

Follow-up with a PR "Charm Offensive"

In the wake of EFSA's and the European Commission's recommendations and the subsequent failure of the European Member States to reach a qualified majority to put the ban in place effective July 2013, Bayer and Syngenta then launched what CEO called a "charm offensive to be seen as part of the solution rather than of the problem." For Syngenta, this consists of an upgrade of its PR sting "Operation Pollinator," in which the company proposes to provide payments to a few farmers to grow strips of flowers and other plants attractive to bees alongside their neonicotinoid-treated crops.

"This comprehensive plan will bring valuable insights into the area of bee health, whereas a ban on neonicotinoids would simply close the door to understanding the problem," Syngenta Chief Operating Officer John Atkin told Greenwise Business in early April. "Banning these products would not save a single hive and it is time that everyone focused on addressing the real causes of declining bee populations."

Dr. Goulson responds that the answer is not so simple, but that "very probably" if neonicotoid pesticides were banned, "on average honeybees would be healthier and would be better able to cope with the other things that they're currently having to deal with..."

EU member states are likely to vote again on the proposed partial ban of neonicotinoids on either April 26 or May 2, according to CEO, which notes: "Meanwhile, the pesticides industry is lobbying Member States hard to try to reach a qualified majority to reject the proposal outright and thus block the ban. The coming weeks' battle will be crucial: will industry interests prevail against bees' survival?"

But the issue of bees and pesticides is a global problem, and according to PRWatch contributor Jill Richardson, the extermination of honeybees, in particular, "could set off a global food crisis." She reports that, in contrast with Europe's efforts to enact measures to save the bees, beekeepers in the United States "remain frustrated that the U.S. government is not as forward-thinking." In fact, the U.S. Environmental Protection Agency (EPA) is "allowing the use of a new, unregistered neonicotinoids called sulfoxaflor, and proposing a 'conditional registration' for it," according to Richardson.

In response, the U.S. environmental advocate group PANNA and others are suing the EPA "for its failure to protect pollinators from dangerous pesticides." PANNA is asking supporters to urge the U.S. Congress to "step up," call a hearing, and "fix a broken pesticide law that leaves EPA hamstrung."

After reading about how nursery plants are soaked in pesticides on Friends of the Earth site foe.org, I wrote asking some questions. Maybe some of you here could help? I’m not sure where to look to find the answers, so even directing me to a site would be helpful! Here’s what happened: We had thousands of bees visiting our yard in Tucson, AZ. Most of these bees live in the ground. A couple of years ago when the city dug up the alley, the bee population was immediately reduced to just a few hundred bees. Now this year there are only about TWELVE BEES! More might come, but these bees were counted when our citrus trees were in bloom – Bees used to swarm our two trees every year! I read recently that nursery plants are practically drowned in pesticides. I am an idiot and didn’t know this before, and thought all of my organic gardening habits for the last 8 years were helping, but I have planted stuff from nurseries. Questions: Could my plants be killing bees? I recently bought plants from a nursery, should I dig them up and get rid of them? What about the plants from years ago, are they still poisoning wildlife? Are their seeds poisonous? Are plants that have grown from those seeds poisonous? What about the dirt? Is the dirt from the seedlings I bought poisoning the ground? (We also have toads that spend about 11 months out of the year hibernating underground.) Do I need to dig up the dirt and get rid of it? Is the groundwater and the whole area that was watered around these plants poisoned? Seriously, if you could direct me ANYWHERE or have ANY answers, I would be extremely appreciative. I did notice this in the comment section, “The neonics get into the soil and dust goes into the field margins. All that operation pollinator will do is attract pollinators to high toxic crops and margins. The half life of some neonics exceeds the 120 days set by the EU. Even Bayer admit imidicloprid has a half life of 288 days, IF you remove the toxic agricultural waste product (formaly known as stubble) from the field.” It makes me think I *should* dig up the recently plants, but I’m not sure what pesticides are doused on nursery plants. Thanks for ANY help, DD
DD, I'm so sorry to hear about the decline in the bee population in your yard. I think the best place to go to learn what pesticides might be on/in your nursery plants would be the nursery. They may redirect you to their supplier, but it would be a trail to follow. As the article points out, the issue of the decline in bee populations is a complex one, and neonicotinoid pesticides are not the only alleged cause. But more studies are discovering links between their use and decline in bee colony health. I hope that helps a little. Best of luck! Bekah