The big action in Congress this week was on bills with big price tags: the $290 billion Farm Bill and a new $300 billion housing crisis bill. It also passed a law banning employers and insurers from using your genes to discriminate against you. And, of course, the race for Democratic superdelegates continues between Sens. Barack Obama and Hillary Clinton, with both picking up several endorsements.

The 2007 Farm Bill looks like it might be ready for a final vote as the House and Senate negotiate between themselves and with President Bush to find a bill that hits all the right political constituencies and has the right price tag. The latest version of the bill, which at $290 billion over ten years is $10 billion over the congressional budget rules and $4.5 billion more than President Bush wants, contains most of the usual subsidies and conversation programs of years past but adds several key provisions. Bush is pressing Congress to lower the income limits on farmers who can receive subsidies from the current $1.95 million to $200,000, well short of Congress' currently proposed $500,000. But Bush also supports keeping $5.2 billion in direct subsidy payments to farmers despite record crop prices, so he's not exactly uniformly thrifty. Also included in the current version of the bill is a $5 billion trust fund for farmers hit by disasters including floods, droughts and fires, a key demand of farm state Democrats and Republicans alike.

However, Bush has taken a hard line on the total price tag for the bill, and has raised a veto threat that Democrats say may be designed to bolster Sen. John McCain's anti-spending credentials. While it remains to see who will blink first, the extension that funds the farm programs is running out and some type of vote is imminent in the next week or two.

For more on this week's legislation and an update on Superdelegate endorsements, click through

The Center for Public Integrity has begun a five part report on the stunning impact of big money advocacy groups in electoral politics, from MoveOn to Freedom's Watch.

With voters heading to the polls in Pennsylvania today, some people might be wondering how the delegates in Pennsylvania are alloted. Well, Congresspedia has you covered! Pennsylvania will send 187 delegates to the Democratic National Convention in August, including 29 superdelegates that will certainly help decide the nomination. Pennsylvania voters, on the other hand, will play a role in choosing the other 158 delegates today: 103 will be allocated by congressional district, while 55 are based on the statewide vote totals.

As this CQ Politics article points out, regions in Pennsylvania that leaned toward Democrats in the most recent presidential and gubernatorial elections received more delegates from the state party. In addition, the state's 19 congressional districts use a proportional system to determine how many delegates a candidate receives at the convention. Hillary Clinton and Barack Obama will easily clear the 15% threshold mandated by the DNC, but the number of delegates they receive will depend on how well they perform in the districts.

The Associated Press reports, "Democrats Barack Obama and Hillary Clinton are walking a delicate line as they promise to aggressively tackle global warming while trying to assure voters that they continue to believe in the future of coal," the energy source responsible for "nearly 2 billion tons of carbon dioxide, the leading greenhouse gas, each

President Bush had thrown down the gauntlet on Monday by submitting the Colombia Free Trade Agreement to Congress for approval. Under the Trade Promotion Authority (or "fast track" authority) rules in place, the House had 60 days to give the agreement an up-or-down vote and the Senate had 30 following that. House Democrats, however, were able to parry his move by invoking a part of the Trade Promotion Authority law that affirms "the constitutional right of either House to change the rules (so far as relating to the procedures of that House) at any time, in the same manner, and to the same extent as any other rule of that House," and passed a resolution removing the deadline in this case. 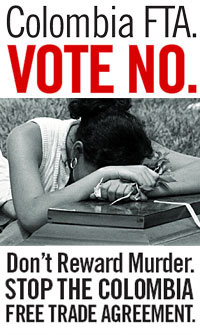 Colombia's $300,000 a year contract (pdf) with Burson-Marsteller stated the PR firm would "provide ongoing strategic communications counsel to the Ambassador and key Embassy officials"; develop "key messages, talking points and briefing materials"; give "advice and communications counsel to the Ambassador and Embassy staff"; and "co-ordinate media interviews and public events with relevant news media in Washington D.C. on behalf of the Embassy."

Colombia ended the contract after Penn described his meeting as "an error in judgment." But the country isn't hurting for lobbying power in Washington, D.C. -- especially among Democrats.

Why didn't the New York Times cover the "Winter Soldier" hearings organized by Iraq Veterans Against the War (IVAW), during which soldiers testified about their experiences in Iraq?

For Mark Penn, who recently resigned as Hillary Clinton's chief campaign strategist, the campaign "has been about as effective an economic stimulus program for himself as anything his clients have ever proposed for the nation," reports Mike Madden.

After Hillary Clinton's presidential campaign announced that Burson-Marsteller (B-M) CEO Mark Penn was no longer its chief strategist, the PR firm distributed a set of talking points for "clients and staff." The memo states that "it is more important than ever for u