"As the 2008 U.S. election starts to sizzle, the Indian outsourcing firms have returned to win Washington over as veritable insiders, slicker and better connected than ever," reports Anand Giridharadas.

During an August 15 news segment on nuclear power, why did National Public Radio's John Ydstie say "many environmentalists ... who began their careers opposed to nuclear power ... are now reconsidering nuclear power in the face of global warming"?

SourceWatch citizen journalist Artificial Intelligence (AI) is a dogged and prolific investigator of the pro-war lobby. AI began digging into the pro-war front group Vets for Freedom in June 2006. AI's research exposing the neoconservative agenda and Republican operatives behind VFF has been used by scores of journalists. Just do a Google search for "Vets for Freedom" and you'll find AI's work in our SourceWatch article right at the top of your returns, next to the VFF's own website.

Pro-war funding appears plentiful for VFF as it gears up to lobby Congress in September. Here's some of the latest from AI and the VFF article on SourceWatch:

McDonald's has been criticized by PR professionals for its response to the recent study by Stanford University School of Medicine and the Lucile Packard Children's Hospital which found that young children preferred foods associated with the company's packaging. 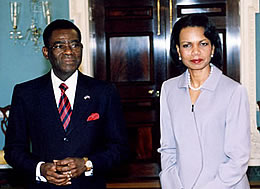 As Ronald Reagan loved to remark, "There they go again." WWF, the corporate-funded environmental giant often accused of taking greenbacks in return for greenwashing its corporate benefactors,

Newsday reports on a successful cooptation of the activist group ACORN by Shell Oil's natural gas venture: "Amid its ongoi

An examination of records from Minnesota, where legislation requires drug company payments to doctors to be disclosed, reveals that between 1997 and 2005 over 5,500 medical professionals in the state were paid a total of over $57 million. Gardiner Harris and Janet Roberts report that "another $40 million went to clinics, research centers and other organizations. More than 20 percent of the state’s licensed physicians received money.