CNN jumped the gun this morning when it erroneously announced that the Supreme Court had struck down the Affordable Care Act's individual mandate -- appearing to side with the court's most vocal critics of the healthcare overhaul.

At 10:11 EDT the CNN headline read "Mandate Struck Down" and opined "the ruling overturns requirement that Americans must buy health insurance. The decision will affect you, generations of Americans and this fall's presidential race."

If you listen to Milwaukee talk radio you have no doubt heard WTMJ's Charlie Sykes crying to high heaven about the outrageous, politically motivated witch hunt of Wisconsin Governor Scott Walker being run out of the Milwaukee District Attorney's office. Milwaukee DA John Chisholm has been spearheading a secret "John Doe" criminal investigation of Walker's former staff and associates for two years now. Trials for four of Walker's associates are pending this fall.

According to Sykes, the DA's office is "leaking like a sieve" and is the source of a damaging article in the Milwaukee Journal Sentinel -- a serious charge, since people can be criminally prosecuted for violating the secrecy rules of the John Doe. The Milwaukee Journal Sentinel's Dan Bice has broken most of the stories about the investigation, but has repeatedly denied that he is getting leaks from prosecutors.

It may not be uncommon to find fault with Politifact and its "Truth-O-Meter," (see update at bottom), but a recent rating by Politifact-Wisconsin was so far off we had to comment. The following letter was published in the Milwaukee Journal-Sentinel on June 23:

PolitiFact recently rated "false" a claim that the Koch brothers gave twice as much to Gov. Scott Walker as Tom Barrett raised. It is PolitiFact that deserves the "false" rating. In rating the claim "false," PolitiFact wrote, "There is no proof of how much Americans for Prosperity, which gets money from the Kochs but also other sources, spent on Walker's behalf."

The media is indiscriminately using the term "job-killer" to describe government policies and programs, but without verifying or substantiating the claims, according to a new study. Use of the phrase by major media outlets has exploded since President Obama took office and rapidly circulates throughout the press with little or no fact checking of the "job killer" allegations.

Just weeks before Wisconsin's June 5 recall election, the banner headline for the Sunday edition of the Wisconsin State Journal declared "Campaign donations: Despite rhetoric, the parties' mountains of money are about even," a puzzling title because all evidence showed Governor Scott Walker with a significant financial advantage over challenger Tom Barrett. Former University of Wisconsin Professor Kathy Barton looked at the numbers used in the analysis and found numerous errors that caused donations to be overstated by an estimated $13 million.

The Center for Media and Democracy (CMD) is pleased to have an article chosen as a final entry in the 82nd Annual Milwaukee Press Club Awards (MPC) for Excellence in Wisconsin Journalism. The finalists will be announced at MPC's May 18th Gridiron Awards Dinner at the Marcus Center for the Performing Arts. The article "Group Called 'Citizens for a Strong America' Operates out of a UPS Mail Drop but Runs Expensive Ads in Supreme Court Race?" written by Lisa Graves, CMD's Executive Director, was nominated in the category of Best Investigative Story or Series. The article illustrates how the Koch-funded Americans for Prosperity group propagates shell organizations, like "Citizens for a Strong America" to meddle in Wisconsin politics, in this instance in the 2011 race between Joanne Kloppenburg and Justice David Prosser. CMD's work was featured on MSNBC's Rachel Maddow show.

In the past few weeks, the shooting death of Trayvon Martin exploded on the national stage. George Zimmerman, the neighborhood watch captain who shot and killed Martin, kept his head down and did not do any interviews. Few spoke on his behalf, until Joe Oliver, a calm, compelling public speaker took to the national airwaves, prompting the question who is Joe Oliver? 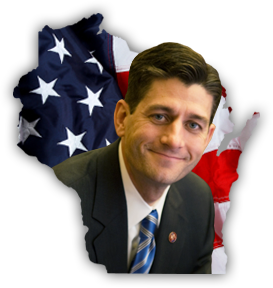 Congressman Paul Ryan (R-Wisconsin) was on Fox News Sunday with Chris Wallace talking about his new GOP budget plan. After the disastrous roll out of last year's budget plan, widely panned for its $6,000 Medicare voucher, Ryan has polished up his approach. He says the new plan would simplify the tax code, "broaden the tax base," and close tax loopholes. You can watch the interview here.

In an interview with Fox News legal eagle Greta Van Susteren, Wisconsin Governor Scott Walker says his upcoming recall election will be a "Waterloo" moment for national unions that will "invest everything possible to try and take me out to send a message."

Van Susteren fell for Walker's Emperor Napoleon spin, giving him ample time to describe how he is being unfairly persecuted by big-money, out-of-state unions who apparently imported all the protestors last year who surrounded and occupied the Wisconsin State Capitol. "When that started to happen, when you see the buses of people come in, the charter planes coming in -- and the money they spent. I mean, they dumped $4 million to $5 million even before any campaigns last year," Walker said.