And the Losers Are ... Kids 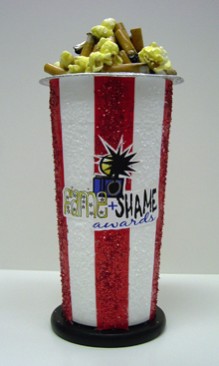 On June 6, limos will be lined up, the red carpet will be rolled out, and decked out attendees will have their photos snapped by swarming paparazzi. But this isn't your usual Hollywood awards ceremony. Instead, it is the 4th annual Fame & Shame Awards, sponsored by the New Mexico Media Literacy Project and New Mexico Voices for Children in collaboration with the Smoke Free Movies Campaign. The "fame" part of the ceremony will recognize New Mexico teens that are working to encourage their peers to not start smoking, or to quit if they have. They are vying for the Youth Kicking Tobacco's Butt Advocate of the Year Award. The "shame" segment targets the entertainment industry. "The ceremony also hands out 'Shamie Awards' to actors, actresses, directors and producers who glamorize smoking in Hollywood movies. This year's nominees include Nicolas Cage, John Cusack and Jamie Foxx as Actor Who Glamorizes Smoking the Most, Beyonce and Emma Thompson as Actress Who Glamorizes Smoking the Most, and Hairspray, Ocean's Thirteen and Wild Hogs (shot in New Mexico) as Most Popular Teen Movie That Glamorizes Smoking."