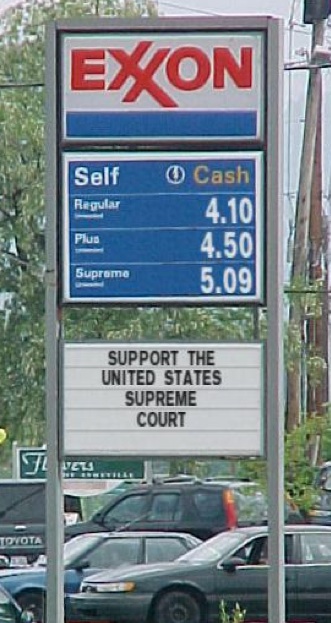 Just this week, the Texas Oil and Gas Association endorsed Perry in his re-election bid, based on his opposition to carbon trading and regulation of the oil and gas industry. While this move is not surprising, it is very worrisome because the Bush Administration was so successful at packing the courts. The Perry-CEI petition for review has been filed with the D.C. Circuit, an eleven-judge court on which Bush was able to install four judges, in addition to the many right-leaning judges put on the court by his father and President Reagan. Six of the current appointees were chosen by Republican presidents; three were chosen by Democratic presidents, and Chief Justice John Roberts served on the D.C. Circuit before being tapped by Bush for the Supreme Court. So this move reflects hope on the part of those who want to throw a wrench in efforts to address global warming that they can win in the appellate court and prevail before the Supreme Court, which has strongly signaled its sympathy for the corporate "rights" agenda in the discredited Citizens United decision last month. (For more information, on that case please check out our Corporate Rights clearinghouse.)

So, while the New York Times story does have a dog-bites-man feel to it, it forebodes a much bigger story in the making, given the direction of the five men in the majority in Citizens United and the right-wing domination of the federal appellate court. Chief Justice Roberts, by the way, has expressed great concern about how little old Exxon was being treated for its environmental damages, as noted in this article about the Exxon Valdez case. And, then he voted in favor of cutting the damages award against Exxon in half, as noted in this story about the Supreme Court's 5-3 decision in that case. So, who will the dog bite next?

P.S. Perry's effort has been joined by three Democratic Senators in addition to several other Republican leaders, including Senator Mary Landrieu (D-LA).

Graves is the Executive Director of the Center for Media and Democracy based in Madison, Wisconsin.

we are relying an too much gas, and that is what hurting the economy