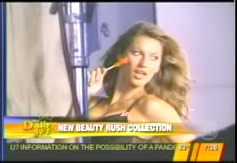 Television stations have maintained a studied silence about our report on the use of video news releases, but the print media has fewer qualms about discussing it. Saturday's Indianapolis Star carried an op-ed piece by Jeffrey McCall, a professor of communication at DePauw University in Greencastle, Indiana. McCall described the use of VNRs as a "sneaky strategy" by "some wayward television news operations" that blurs the line "between reality and fantasy."

It is not just a matter of ethics; it is also a legal problem. Federal Communications Commission rules require that the identity of such messages be disclosed on air. Not only was the source not disclosed in the sampled VNR reports, but also many broadcasters used their own graphics to create the appearance of local origination. ...

Using broadcast material provided by public relations firms is a cheap and easy way for news operations to fill airtime, but as FCC commissioner Michael Copps has said, a news story "cannot be judged without knowing its source." Viewers shouldn't have to wonder whether each report about electronics or pharmaceuticals is real news or PR puffery. Labeling the sources of outside input, as required by the FCC, helps audiences with that judging process. Not using VNR material at all would be even better, thus diminishing the blurring line between fantasy and reality.

Unfortunately, McCall also underestimated the scope of the problem. "To be sure, a large majority of local television news producers refuse to use these stealth reports," he stated, estimating the number that are distributed each year by PR firms as "hundreds" when the actual number is in the thousands - a fact that Diane Farsetta and Dan Price documented when they wrote our report. In September 1990, the magazine of the Society of Professional Journalists reported that "5,000 to 15,000 VNRs are distributed each year." The number has almost certainly grown since then. In March 2005, the New York Times noted that a single VNR company, Medialink, "produces and distributes about 1,000 video news releases a year, most commissioned by major corporations." And Medialink is only one of the companies that makes VNRs. The April 2006 issue of O'Dwyer's PR Report listed dozens of broadcast PR firms, some 50 of which were described as being involved in some aspect of VNR production, distribution, promotion and/or tracking.

From 1998 to 2002, the Project for Excellence in Journalism studied the content of 33,911 television reports. During that period, they found, "the percentage of 'feed' material from third-party sources rose to 23 percent of all reports from 14 percent. Meanwhile, the percentage of stories that included a local correspondent fell to 43 percent from 62 percent. ... The public companies that own TV stations are so intent on increasing their stock price and pleasing their shareholders that they are squeezing the news out of the news business."

These statistics come as no surprise to the companies that make and distribute VNRs. As part of the service that they offer to their clients, they also track when and where VNRs are actually broadcast. To make the monitoring easier, they even embed an electronic encoding signal in the videos. Much like closed captioning, the embedded signal is invisible to viewers at home but enables VNR companies to detect electronically which stations have aired VNR video and when.

On the basis of that research, Medialink president Larry Moskowitz stated in a 2003 interview, "We determined prima facie and scientifically and electronically that every television station in America with a newscast has used and probably uses regularly this material from corporations and organizations that we provide as VNRs or B-roll or other terminology we may use" (emphasis added).

If every TV station in America uses VNRs, clearly it is inaccurate and untrue to claim that "a large majority" of TV news programs are refusing to use them.

In his commentary, Professor McCall noted that the Radio-Television News Directors Association (the main trade association of news broadcasters) "responded to the recent CMD report by sending a stern message urging members to follow its code of ethics on the matter. The code asks broadcasters to 'label all material provided by outsiders.'" No one should be reassured, however, by this. As we have documented repeatedly, the RTNDA has consistently misled the public in its public statements about VNRs, alternating between denying that they are ever used and then, when faced with proof to the contrary, offering bland claims that TV stations have "fixed the problem" when in fact they have done nothing of the sort. RTNDA's recent "stern message" is not much different from the message it issued in March 2005, after the New York Times ran an exposé on government-sponsored VNRs. Every time the broadcasters get caught red-handed, they recirculate the same set of guidelines, congratulate themselves on their high ethical standards, and hope that no one will notice that nothing has actually changed.

RTNDA has continued to bob and weave even after our report this year provided captured video footage which can leave no doubt that TV stations have been disguising VNRs as their own reporting. Notwithstanding the "sternness" of RTNDA's response to our report, we know for a fact that the use of supplied footage continues to this day.