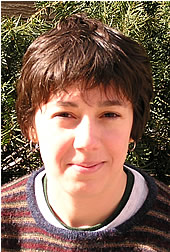 Our senior researcher, Diane Farsetta, is one "bad mamma jamma" according to the author of "The Quincy Dump," who interviewed her for his blog about the Fake TV News report that she co-wrote and researched with Dan Price.

"The Quincy Dump" is focused on the problem of media consolidation in Quincy, Illinois, which the anonymous blogger says is "one of nine communities in the country where one company is allowed to own television, radio and the only newspaper in the same market. It is because of this cross ownership that so much Quincy media news goes unreported and Quincy media ethics go unchecked." Quincy Newspapers Incorporated owns WSJV-TV, a Fox Network affiliate in South Bend, Indiana that broadcast one of the video news releases featured in Diane and Dan's report.

Diane has also been a busy mamma jamma, following the announcement last week by the Federal Communications Commission that it would be investigating the complaint which CMD filed in concert with Free Press. During our regular staff meeting last Thursday, she had to excuse herself several times to answer phone calls from reporters (print, of course, not television). The FCC investigation has prompted coverage in publications such as the Los Angeles Times, Miami Herald and the Independent (UK). We also got a very nice writeup by Jennifer Nix on FireDogLake, a popular liberal political blog. I was struck in particular by one of the comments posted in response to the FireDogLake article:

FDL'rs, there's an action plan here waiting to coalesce. Everytime you notice one of these VNR's that fraudulently (yes, I think this is a fraud) represent a corporate or political point of view as news, we should be writing a letter to the FCC and asking for the review of the local broadcaster's licensure. We also should be organizing a group to buy a de minimus share of stock in these companies, to provide access to a shareholder's meeting; we can then insert shareholder petitions into shareholder meetings, asking for a change of corporate charter to forbid the corporation to create or use VNR's as a product since they are a fraudulent practice.

And we should be writing letters to the editor of every newspaper in the region served by the broadcasters in question whenever there is a VNR, to point out the problem and ask other viewers to take action as described here. The folks who read the LTE's are the same ones most affected by VNR's; those of us out here in the blogosphere aren't watching television as much.

This is exactly what I think needs to happen, and it's part of the reason why we've teamed up with Free Press to work on this issue. (If you haven't signed on to their petition to the FCC, please do so now.) We've had a number of discussions at the Center for Media and Democracy about how we might facilitate more public activism around this issue, but we haven't quite figured out yet how to organize it.

There are two discrete things that need to be accomplished:

The thing that really pisses me off about this whole issue is that John Stauber and I first wrote about VNRs more than a decade ago, in our 1993 book, Toxic Sludge Is Good For You: Lies, Damn Lies and the Public Relations Industry. Since then, we have talked about VNRs on numerous occasions when we have been interviewed for newspapers or radio. On more than one occasion I've done call-in radio interviews in which TV news producers have actually phoned in and hammered me, claiming that "no TV stations ever use that stuff," and acting as though I'm nuts to suggest that it ever happens. Last year Barbara Cochran, the president of the Radio-Television News Directors Association, claimed that few TV stations air VNRs, and those that do almost always identify the source. VNRs, she said, were "kind of like the Loch Ness Monster. Everyone talks about it, but not many people have actually seen it."

Back when she said that, we knew she was blowing smoke, because PR people discuss video news releases fairly candidly in the PR trade press and at PR industry workshops that we have attended. When we've talked about this publicly, though, TV news people have acted as though we were cranks or conspiracy theorists.

Now, thanks to Diane and Dan, we've got actual video that shows how commonly and flagrantly VNRs are passed off as real news. What this proves is that American TV news producers and people like Barbara Cochran have been lying through their teeth, and they've been lying for more than a decade. If they're this dishonest about what goes on inside their own newsrooms, how can anyone expect them to do an honest job of reporting what goes on in the rest of the world?