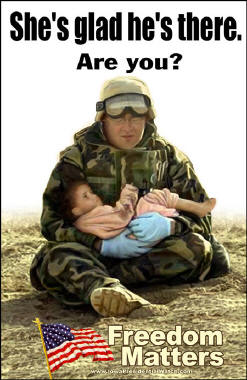 Thanks to PR Watch forums contributor "El Gringo" for calling our attention to a really atrocious example of dishonest propaganda. The graphic at right is by Linda Eddy, an artist for the website, IowaPresidentialWatch.com. Owned by Roger Hughes, chairman of the Republican Party in Hamilton County, Iowa, the website spent the recent U.S. presidential election calling Democratic candidate John Kerry a habitual liar and comparing him to Nazi propagandist Joseph Goebbels -- which is awfully ironic in light of its own promotion of a big lie.

The image you see here might lead you to believe that the child in the picture has been made "glad" and secure thanks to the U.S. troop presence in Iraq. As "El Gringo" discovered, however, Lindy Eddy doctored the photograph. The original photo, taken by a journalist, depicted a young girl who had just received bullet wounds during a firefight in which her mother was killed and her father was wounded. Eddy doctored the photo by erasing the little girl's own face (which carries the listless expression you would expect from an injured child) and replacing it with someone else's face to make her look positively radiant and adoring.

The soldier holding the girl is Navy medic Richard Barnett of Camarilo, California, who was checking her heart when the photo was taken. Barnett himself wasn't "glad" about the circumstances. "If anything good comes from this nonsense, I haven't seen it yet," he said as she and her father were taken away for a medivac helicopter.

Linda Eddy is a small fry in the world of conservative propagandists, and usually I don't bother to write about someone this minor, but this obviously deliberate manipulation of the image of a wounded child makes me angry. I cannot for the life of me understand how a human being with any conscience whatsoever would engage in this shameless, exploitative falsification.