For a non-actress surrounded by movie stars, Debbie Levin, President of the Environmental Media Association (EMA) -- an organization founded by Norman Lear -- is putting on quite a performance of her own. Too bad it's more likely to win her a fraud charge than an Oscar, based on her May 6, 2011 letter to her Board provided to the Food Rights Network by a source inside EMA. 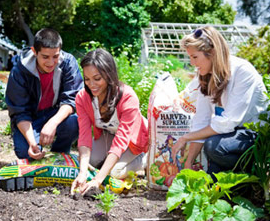 Over the past month, Levin has been confronted with ample evidence that the group she runs exposed school children (not to mention the Hollywood celebrities that serve on the group's board) to toxic sewage sludge. In 2009, EMA began a partnership with several Los Angeles schools, securing the donation of thousands of dollars in compost and soil amendment products from Kellogg Garden Products for the schools' organic gardens soon thereafter. In a sworn affidavit, former L.A. Unified School District garden advisor, Mud Baron, said that he informed Levin early on and repeatedly that Kellogg uses sewage sludge in many of its products, and sewage sludge is illegal for use in organic gardens.

Yet on Friday, May 6, she emailed the board a message that reads, in part:

It's unfortunate in the midst of this great success, some can try to find controversy where none exists. The standards of the gardening program and our relationship with Kellogg Garden Products have been called into question. A San Francisco-based blogger posted a story last week claiming that Kellogg's nonorganic materials were being used in school garden programs. Following that, an environmental blog picked up the story and expanded upon it by questioning our relationship with Kellogg since the company sells products that aren't considered environmentally correct. Let me walk you through some of the facts:

The stories claim that nonorganic materials were used at school sites. This is not accurate. Schools only have access to Kellogg organic materials. This misconception may come from the fact that shortly after our program started two years ago, one participating school reached out directly to Kellogg and obtained mulch that is not considered organic. We regret that one school acted on its own in securing nonorganic materials... 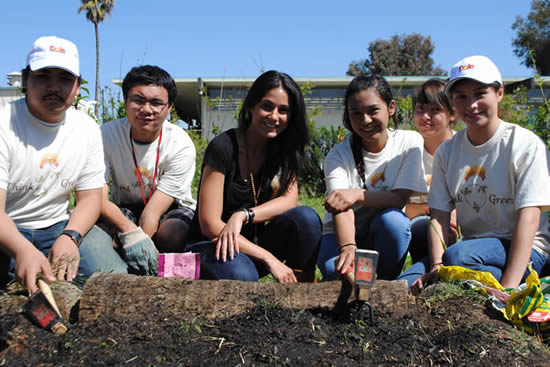 Unfortunately for Levin, this is contradicted by strong evidence. Note how she refers only to products that were "not considered organic," thus avoiding the core issue of sewage sludge. Sewage sludge can contain a wide range of thousands of contaminants, from dioxins to heavy metals and more. Levin also never identifies the publications that wrote about EMA's sludge problem or provides links, so that her board can read them and evaluate them. (The first piece she refers to appeared on SFGate on April 25 and the second appeared on Mother Jones on April 27.)

On January 4, 2010, an email from EMA went to all of the garden teachers for the Los Angeles schools that EMA had "adopted." The email, with the subject "Friendly Reminder: Kellogg Donation Requests," read in part:

As you all know, we have formed a partnership with Kellogg Garden Products and they have generously agreed to provide in-kind donation to your garden's (sic). Now all we need is your requests!

I have attached a revised list of items Kellogg has offered to donate. Please send me your requests at your earliest convenience and I will pass them along to Kellogg. 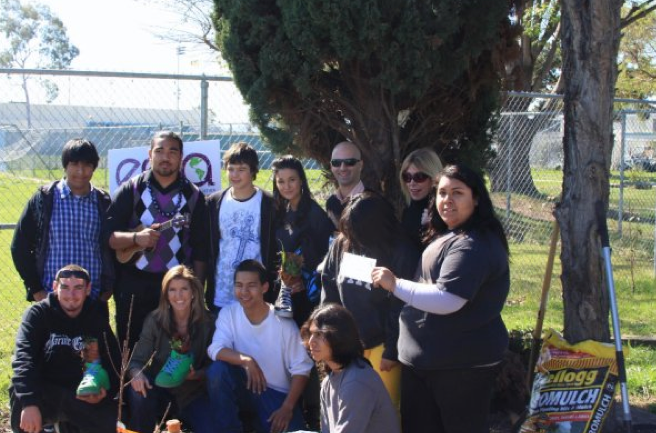 EMA's email gave the schools an order form with Kellogg's sewage sludge products -- Gromulch, Amend, Nitrohumus, and Topper -- right at the top of the list of products the organic gardens could get for free, with no indication to the schools that these products contained sewage sludge and are barred in organic gardens. (See a photo of the form here.) Additionally, an email from Kellogg Garden Products, obtained by the Food Rights Network, shows that 192 bags of sewage sludge product (Gromulch) were provided in one 2010 order. (See the spreadsheet here.)

Despite this proof from within EMA's own records, Levin continues in her email to the EMA board: 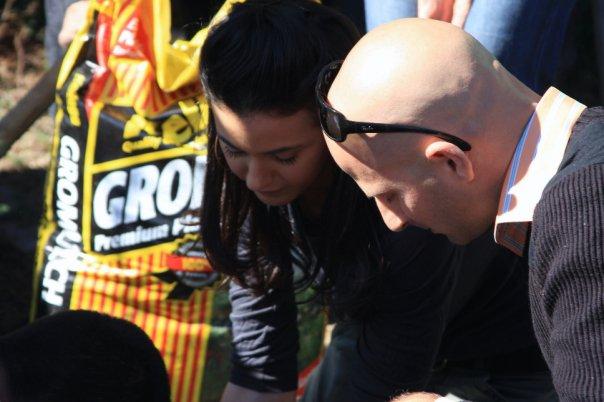 Here, Levin makes it sound like the photos showing Kellogg's Amend brand sewage sludge product (as depicted in the photo above with Rosario Dawson) were a one-time accident, claiming the Kellogg products were posed there for the photos and not used. She does not account for other photos that show empty bags of Kellogg sludge compost (likely Gromulch or Amend), such as the one below taken at Carson High School.

Levin's lies are just the latest in a string of them she has dished out since the sludge issue was first called out by the Center for Media and Democracy's Food Rights Network in a letter to EMA founder Norman Lear and her on March 30 of this year. She did not reply until April 21. You can read the correspondence between EMA and the Center for Media and Democracy and others here. Her first email, on April 21, sidestepped the sludge issue entirely. However, after the photo of Amend with Dawson was pointed out, she told Mother Jones that "no Kellogg Amend was ever actually applied to EMA's gardens (though one school may have inadvertently ordered a different sludge-based product)." There is no record that Helen Bernstein High School, which ordered the sludge based Gromulch, did not contaminate its organic gardens with the bags of sewage sludge products. 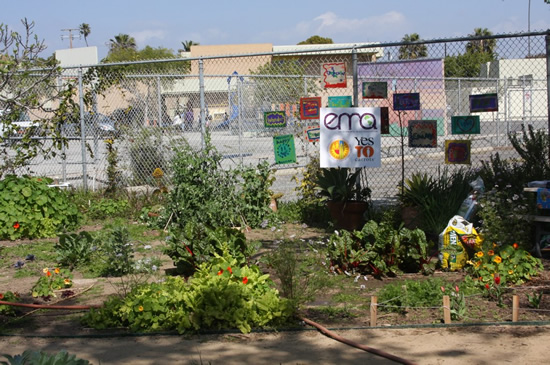 After Mud Baron's affidavit contradicting Levin's claims that no sewage sludge was used was made public in a post on this blog May 3, Levin received the following email from the Cornucopia Institute (an organic watchdog organization) co-founder Mark Kastel. Kastel wrote to her, saying:

I have been aware of, and have respected, your work for some time. However, recently I learned about your association with, and promotion of, a company marketing compost that's derived from municipal sewage sludge.

Because I think you are promoting some very positive, and truly organic activities, I wanted to make sure you knew that the federal organic standards explicitly prohibit using sewage sludge as a soil amendment.

As an organic industry watchdog we feel it is really important that all of us in this movement protect the integrity of the organic label and the language we use to communicate/promote it to others.

Maybe you have already broken ties with these suppliers but if not I am certainly going to encourage you to do so on an expedited basis.

Please let me know what the status of this is.

Levin responded to Kastel May 4, saying:

We only use organic products (OMRI) in our program. We're investigating the issue of sludge but have not used that in our program. As always, EMA works with the sustainable products in companies that support our programs.

Kastel wrote back, also on May 4:

I appreciate your prompt response. However, I'm a bit confused.

I have read this article (link below) by Jill Richardson? ... She reports that sludge has gone from EMA onto the organic LA school gardens:

"Baron says he continually raised the issue of sewage sludge in Kellogg products, but Levin responded 'We've been doing our projects for 20 years, we know what we are doing.' Yet order records from the schools betray that one high school ordered 192 bags of Gromulch, made with sludge, in 2010 alone. Baron adds that the resource-strapped schools shared the donations they received from Kellogg, so the 384 cubic feet of Gromulch may be split among several schools' gardens."

I really appreciate your take on this? If this article is false or inaccurate, the organic community needs to know that! 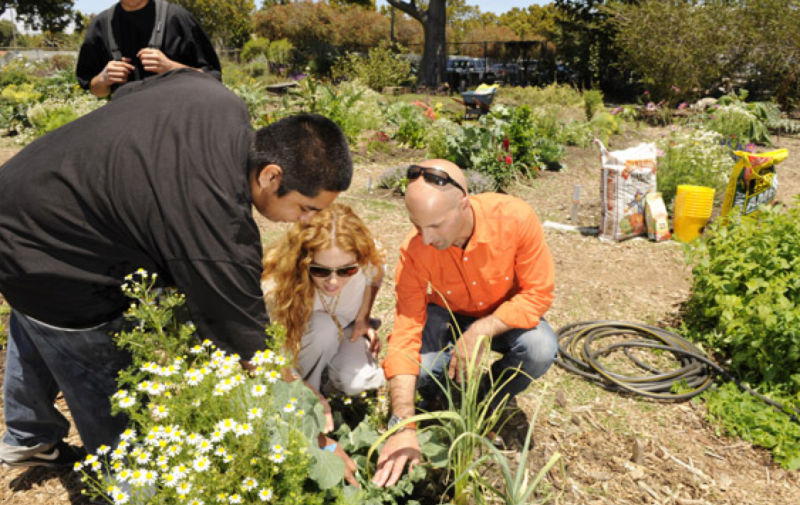 To date, Levin has not replied to Kastel, but instead she repeated her deceptive spin to the Board of EMA, which has fiduciary responsibilities to ensure that its spokesperson is not misleading the public, which Debbie Levin clearly is. Sewage sludge products were plainly used at the organic gardens EMA adopted and supplied with Kellogg donations. A picture is worth a thousand words, and numerous pieces of photographic evidence document that Levin is lying to her Board, to the stars, to the school kids and the world at large about the gardens.

Since EMA brought Kellogg on as a sponsor in 2009 and proceeded to contaminate the "organic" gardens with sewage sludge products, the gardens have violated USDA's organic standards. At one point last month, EMA asserted the gardens were "never claimed to be organic" and even deleted the word "organic" from its online donation form and description of the gardens. But that does not change the fact that EMA has solicited and received tax deductible donations for its "organic" garden program over the past two years, while it steadfastly partnered with a sewage sludge company and urged the organic school gardens to order sewage sludge products from Kellogg, which in turn provided hundreds of cubic feet of the sludge-based materials while promoting its sludge products at several EMA events, including at the 2010 EMA Awards.

Levin even posed with Kathy Kellogg Johnson, Kellogg's -- get this -- Chief Sustainability Officer, and a bag of Kellogg's sewage sludge material, and she disregarded concerns of the schools' gardener about Kellogg's use of sewage sludge. Even after being told about the sludge again this March, EMA had an event at a school garden last month with a Kellogg poster promoting Gromulch, and its celebrities continue to promote the gardens as "organic," despite the gardens being contaminated by sewage sludge products. This looks like fraud and more at this point. Yet when pressed to come clean, clean up the gardens, and dump the corporation that has contaminated the gardens with EMA, Levin has responded by lying to the organization's board and lying to the organic community. 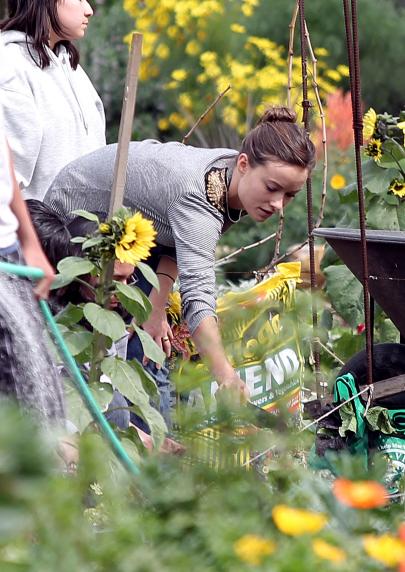 EMA's contamination of school gardens, Levin's false claims and cover up, all beg the question: where are Lyn and Norman Lear in this growing scandal and embarrassment for the organization Norman founded over 20 years ago? He and Lyn are on the board, but thus far they have been silent, allowing Levin to handle the controversy. Could it be because they believe her lies?

That is terrible, and not because of the black eye it is giving the Lears and other Hollywood celebs. It's terrible because Lear's organization has exposed poor kids in organic school gardens to a toxic stew. EMA won't fess up, and its real commitment is obviously to Kellogg Garden Products and their money. EMA is clearly 'greenwashing' what author John Stauber calls "the biggest toxic scam in America. Bagging sewage sludge, labeling it compost and selling it to duped gardeners. Across America this spring millions of people are unwittingly turning their home and school gardens into dumps for industrial, medical and home sewage waste," as Stauber points out in this video expose' of Kellogg's Amend.

Lisa Graves, the executive director of the Center for Media and Democracy, added "Levin needs to quit covering for Kellogg and denounce Kellogg's contamination of the kids' gardens and its use of young celebrities to unwittingly promote its sewage sludge products and brand. Mr. and Mrs. Lear should insist that EMA immediately notify the schools, school children, and their parents, and EMA's donors who supported the organic school gardens that Kellogg's sludge products have contaminated." She added that "EMA must remediate the gardens and pledge not to partner with any company that deceptively sells sewage sludge products as 'quality organics,' like Kellogg," and she underscored that "No corporate donor's financial support is worth exposing these children to the hazardous substances in sewage sludge in what were supposed to be 'organic' gardens, before EMA hooked up with a sludge peddler."

Lisa Graves is raising a legitimate concern. May I suggest an accredited lab test the soil in the LA gardens? Test the soil in the bags from the garden shops? How much Sludge is used? Where is the sludge coming from? If there's more bones to dig, find a hound with a good nose and this story won't stay buried long.