Should Obama Use Executive Action on Immigration? Ask Ronald Reagan 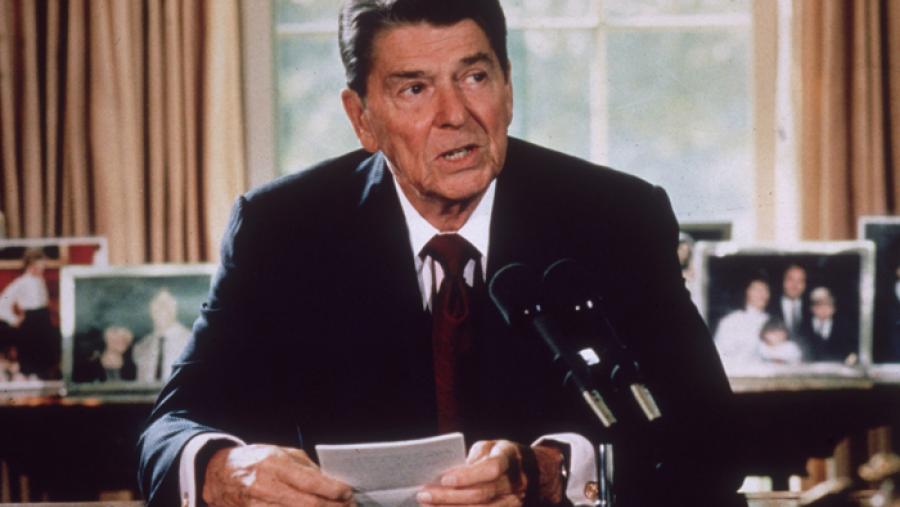 Republicans and right-wing groups like the Heritage Foundation are howling that President Obama will use executive action to defer deportation for some undocumented immigrants -- and trying to deny that Republican presidents like Ronald Reagan and George H.W. Bush led the way, and in some ways extended their authority even beyond Obama's plans.

Obama's planned executive action would not grant undocumented immigrants a "green card" or citizenship -- only Congress can do that -- but would instead grant a reprieve for the same people that would be affected by the comprehensive immigration reform bill, which passed the U.S. Senate and likely has majority support in the U.S. House. (In fact, the Senate bill would affect twice as many people as Obama's executive action.) Undocumented immigrants who have lived in the U.S. for five years would be protected from deportation, although they won't be eligible for public assistance or insurance subsidies under the Affordable Care Act.

This is nothing new.

In 1987, Ronald Reagan used his executive authority to similarly defer deportation for some undocumented immigrants -- even after Congress passed a bill excluding those same individuals.

One year earlier, in 1986, Reagan signed the last comprehensive immigration reform law to pass Congress. Although it gave up to 3 million unauthorized immigrants a path to legalization, the children and spouses of those eligible for "amnesty" still faced deportation.

“The law said nothing about legalizing children or spouses," the Chicago Tribune noted. "Although Congress considered including them, conservative groups who opposed letting more immigrants into the country derailed the idea.”

The U.S. Catholic Bishops and immigrant's rights groups protested how the law would have the effect of separating families. Some members of Congress tried to pass new legislation to legalize the family members, but the bills failed.

So Reagan's Immigration and Nationalization Service (INS) stepped-in and declared that they would defer deportation for children whose parents were legalizing.

In other words, Congress passed an immigration law that expressly excluded a large group of people from its protections -- and for reasons of fairness and family unity, Reagan chose to protect them anyway. (That wasn't Reagan's only executive order protecting immigrants. The same year, in 1987, Reagan deferred deportation for over 200,000 Nicaraguans.)

Contrast this with 2014. Republicans and Democrats in the U.S. Senate passed a bill that would protect the same people as Obama's likely executive order. Leaders in the Republican-controlled House say that they also want to pass comprehensive legislation but have refused to put it up for a vote -- and if they did, the bill would almost certainly pass.

The Heritage Foundation's Hans Van Spakovsky -- perhaps best known for hyping discredited claims of voter fraud -- and John G. Malcolm have tried to argue that Reagan's executive action was somehow different than Obama's. Unlike Obama, they argue on November 19, "Reagan was not defying Congress, but rather carrying out the general intent of Congress which had just passed a blanket amnesty for millions of illegal immigrants." Similarly, the Federalist Society claims that Congress "had not anticipated" that children and spouses would not be covered by the 1986 law, and David Frum at The Atlantic argues that their omission was "unanticipated."

A 1987 memo from Reagan’s INS made clear that Congress did not intend to include the children protected by Reagan's executive action -- and that Reagan was taking action anyway.

Congress "did not intend to place all illegal aliens within a legal status," the memo said, noting that the 1986 bill was controversial and likely would not have passed if children and spouses had been included. "There is nothing in these documents that would indicate Congress wanted to provide immigration benefits to others who didn't meet the basic criteria, including families of legalized aliens," the memo said.

Yet, the Reagan administration nonetheless declared it would exercise its "discretion by allowing minor children to remain in the United States even though they do not qualify on their own, but whose parents (or single parent in the case of divorce or death of spouse) have qualified" for legalization under the law.

The House failed to act on the bill. So George H.W. Bush took executive action the next year, and administratively implemented the Senate bill's provisions himself.

(Here too the Heritage Foundation gets its facts wrong: Van Spakovsky and Malcolm claim that only 180,000 people were affected by Bush's executive action, but as "proof" cites an entirely different law.)

"Bush’s action was strikingly parallel to Obama’s in several respects," says Mark Noferi, a fellow with the American Immigration Council. "Bush took action that was large-scale, on a family-based matter of domestic policy (not foreign policy), and while the Senate had passed legislation but the House had not."

Reagan and Bush weren't the only presidents to use their executive authority on immigration. The American Immigration Council counted 36 examples of immigration action taken by every U.S. president since 1936

In other words, Reagan's and Bush's executive orders led the way for Congress to take action -- and in the process, protected the livelihoods of countless immigrants and kept families together. The same could happen with Obama's executive order.

"Nothing would prevent the House from passing the Senate legislation in the remaining time in this Congress," Noferi said.

Go back six years to comments made by GOP. Their goal was to make Obama a one-term President. When that did not work their goal became to sabotage anything the DEMS wanted. Its OK for the GOP to do it, but not DEMS. That has the makings of a dictatorial state if left unchecked.