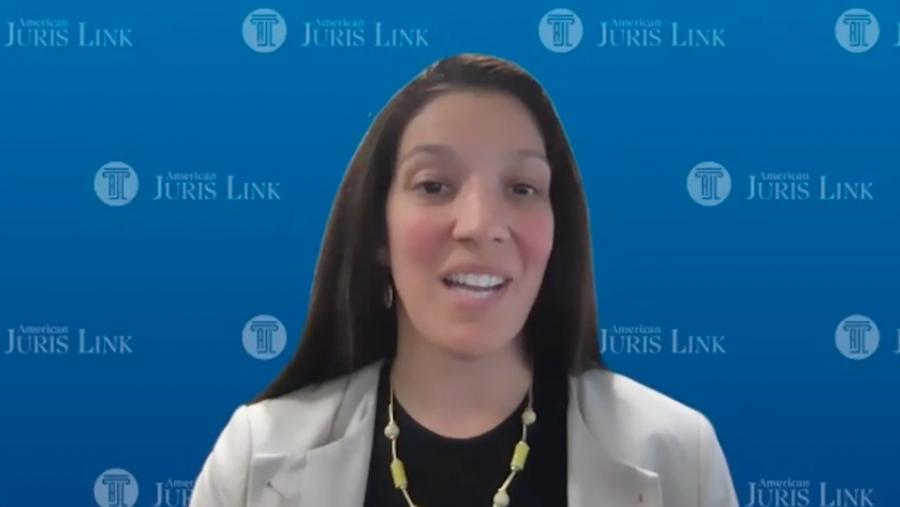 Originally registered as an independent nonprofit under the name "Litigators for Liberty" in late 2019, American Juris Link (AJL) was "incubated by the State Policy Network" (SPN) based on "extensive strategic planning" and "input from leading litigators and philanthropists," according to a job listing with the right-wing head-hunting firm Talent Market.

In an SPN webinar titled, "Protecting American Freedom Through Strategic Litigation," AJL's founder and president Carrie Ann Donnell describes AJL as "basically like the SPN for litigators." SPN is a web of right-wing "think tanks" and tax-exempt organizations in 50 states, Washington, D.C., Canada, and the United Kingdom.

AJL's Donnell also serves as director of the Federalist Society's Pro Bono Resource Center. The Federalist Society is the nation's most influential right-wing legal organization with deep ties to the conservative wing of the U.S. Supreme Court. Its board Co-Chair, Leonard Leo, has been dubbed the "judge whisperer" for his strong influence on Trump's more than 200 judicial picks.

SPN's executive vice president Tony Woodlief, Ballotpedia's publisher Leslie Graves, and Rule of Law Defense Fund's executive director Peter Bisbee all serve on the board of AJL. The Rule of Law Defense Fund (RLDF) is the sister organization of the Republican Attorneys General Association (RAGA), a cash-for-influence operation that coordinates the activities of Republican state attorneys general and sells access to those AGs and their staff to its corporate funders. RLDF and RAGA were recently exposed for their roles in supporting the violent pro-Trump insurrection on the Capitol on Jan. 6.

Since the beginning of the pandemic, AJL has assisted numerous organizations in filing lawsuits to upend public health restrictions put in place in order to stop the spread of COVID-19. It holds a "regularly scheduled COVID Litigation Roundtable" for strategizing and collaborating against COVID orders, and has partnered with Ballotpedia to create a COVID-19 lawsuit tracker of every court case challenging public health orders due to the pandemic, funded by a $41,000 grant from DonorsTrust, the Koch political network's preferred donor conduit. DonorsTrust also disclosed a contribution of $45,000 to AJL on its 2019 IRS filing.

In a September 2020 newsletter, AJL highlights the following ways its allies have utilized the database:

Evaluate the merits of bringing constitutional challenges to mask ordinances;

Survey the landscape of cases that challenge bans on tenant evictions;

In Massachusetts, AJL secured the Pacific Legal Foundation's help in trying to overturn a moratorium that prevented landlords from evicting tenants during the pandemic. The case was ultimately dismissed.

AJL also aided Libby Sobic at the Wisconsin Institute for Law & Liberty in finding local counsel and signees for an amicus brief arguing that federal CARES Act relief funds should be doled out in the states to private schools more equally.

It also hooked up with the Public Interest Legal Foundation (PILF), a right-wing litigation outfit that fights to purge voter rolls and spreads misinformation around voter fraud, to block efforts to improve access to absentee ballots in North Carolina and Tennessee.

AJL has assisted in a number of cases to support the movement to weaken unions.

In 2020, AJL worked to support SPN's Ohio affiliate, the Buckeye Institute, in its unsuccessful attempt to get the U.S. Supreme Court to take an appeal in Reisman v. Associated Faculties of the University of Maine. The case had attempted to overturn the longstanding practice of allowing democratically elected public-sector unions to exclusively represent employees in negotiations over pay and working conditions.

The group "recruited" the Maine Policy Institute (formerly the Maine Heritage Policy Center) to file a supporting brief and "secured" 12 additional amicus groups, many of which are SPN members, to sign on, according to a March 2020 newsletter.

AJL also helps match groups working to convince union members to drop out of their unions with lawyers aligned with their mission.

AJL is not required to reveal its donors by law, and its only available Internal Revenue Service filing acquired by CMD shows it brought in $146,000 in revenue in 2019. However, the Bradley Foundation has disclosed providing AJL with $100,000 "for start-up support" in 2020.

Bradley has long emphasized the funding of litigation efforts as part of its larger strategy to weaponize philanthropy to build up a right-wing infrastructure, as CMD exposed in its 2017 Bradley Files investigation.

In 2014, the Bradley Foundation provided $350,000 in seed money for Clint Bolick's "initiative to create a state litigation alliance," Bradley internal files examined by CMD show. Bolick was vice president for litigation at the SPN-affiliated Goldwater Institute at the time. Donnell was an attorney at Goldwater "who helped launch the first state-based litigation center" alongside Bolick. Today, Bolick sits on the Arizona Supreme Court.

The state litigation alliance "helps research and identify those states that have greatest potential for advancing state-constitutional law – then trains and, if asked, mentors attorneys who can either lead or staff existing or newly-created legal centers elsewhere, with an intensive ‘litigation boot camp’ for interested conscripts," Bradley staff wrote.

In all, Bradley contributed $600,000 (2014-2015) to the state litigation alliance for its "great potential" to "maximize[e] the benefit of Bradley's much other recent strategic grantmaking to improve conservative infrastructures," a grant history record states.

AJL appears to be another attempt by Bradley to realize that goal.

Bradley has also demonstrated interest in funding amicus projects, and AJL promotes the organizing of amicus signers and briefs.

In addition to Bradley, the Charles Koch Foundation disclosed $20,000 "for future payment" to AJL on its 2019 IRS fling.

SPN President and CEO Tracie Sharp praised the new partnership with AJL as "a durable freedom infrastructure…where you have think tanks…locking arms with litigators to really press forward to be strategic, to be agile."

"This is how we are going to have state solutions, national impact in both the short term and the long term," Sharp said.

CMD has identified the following organizations that have received assistance from AJL so far: