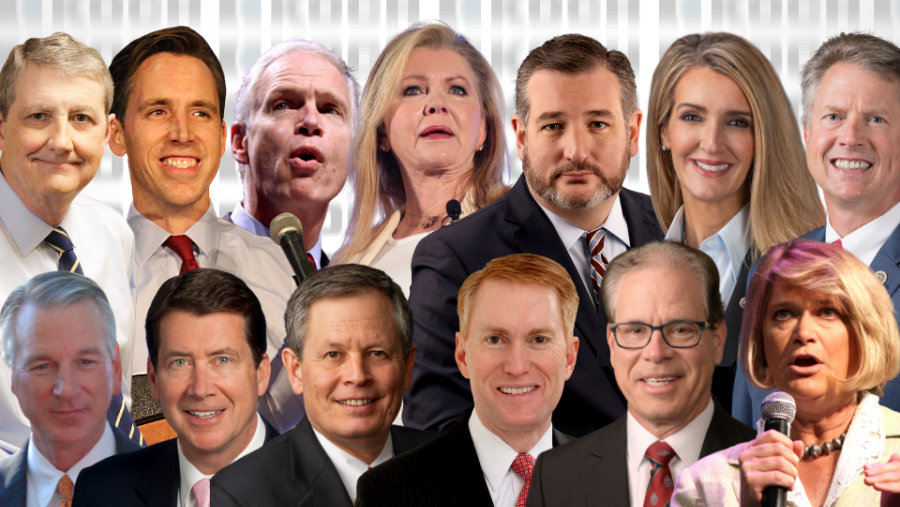 By Alex Kotch and David Armiak

Charles Koch's political operation and his close family members have funded the campaigns and leadership PACs of all 13 U.S. senators who will attempt to stop Congress from certifying Joe Biden's victory on Jan. 6 based on Trump's conspiracy theories and lies. When Congress convenes on Jan. 6 to certify the Electoral College results giving Joe Biden a clear victory in the 2020 presidential election, 13 right-wing senators will attempt to block the process in clear violation of the Constitution they swore an oath to defend.

All 13 of those senators have received the financial backing of Charles Koch, whose political operation and family have spent more than $15 million to put them in the Senate.

Heavily Koch-funded independent spending groups have poured millions of dollars into election ads and canvassing to help five of these senators win their races. Meanwhile, Koch Industries PAC (Koch PAC), the Koch Industries-affiliated Aegis PAC, and members of the Koch family have together donated over $600,000 to the campaigns and leadership PACs of all 13, according to data from the Federal Election Commission.

In his new book, Believe in People: Bottom-Up Solutions for A Top-Down World, the right-wing billionaire CEO of fossil fuel and materials conglomerate Koch Industries expresses some regret for his lifetime of funding divisive, heavily partisan politics. And yet, just weeks after giving softball interviews to credulous corporate media outlets amidst an effort to improve his public image at the end of his life, more than a dozen U.S. senators he helped elect are prepared to throw out the very concept of democracy and dispute Joe Biden's overwhelming electoral victory.

On Jan. 4, 200 business leaders published a letter urging Congress to certify the election results, saying that "attempts to thwart or delay this process run counter to the essential tenets of our democracy." The U.S. Chamber of Commerce, often an ally of the Right, issued a similar statement. Missing from these appeals was Charles Koch, who has been personally silent in the face of this assault on American democracy. In November, however, Koch did congratulate Biden on his victory, and his political advocacy group, Americans for Prosperity, issued a statement on Jan. 5 encouraging Congress to certify Biden's victory.

The 13 Republican senators—including Ted Cruz of Texas, Josh Hawley of Missouri, and Ron Johnson of Wisconsin—have decided to discredit themselves and placate President Donald Trump and his far-right voter base. After Hawley first announced he would challenge the electors from several disputed states, Cruz and 10 additional senators issued a joint statement calling for the formation of an election fraud commission, saying they would contest the election in the joint session of Congress on Jan. 6 to certify the final election results "unless and until" a 10-day audit is completed.

Both of Georgia's GOP senators who have re-election runoffs on Jan. 5 have come out in support of the coup attempt, and Koch money has also aided their campaigns. Kelly Loeffler is currently a senator, but David Perdue is not, and because his election won't be certified by Jan. 6, he won't be able to vote to overturn democracy if he does win.

As many as 140 of their GOP colleagues in the House will also contest states' electors in the joint session, meaning that the two chambers will have to split up and debate the challenges separately. Koch Industries' PAC is the top single corporation PAC donor to the campaigns of the first 11 House members and members-elect who announced their intention to contest electoral votes in Trump's favor, according to a recent CMD report.

While these actions will not overturn the election that Biden won by over seven million votes and will merely result in a delay of a few hours, the charade will set a dangerous precedent. Harvard professor Alexander Keysarr, a leading expert on U.S. history, warns that to "go down this path" makes it more likely that it will happen again under different circumstances and possibly when Republicans control both chambers of Congress.

One of the biggest forces behind the electoral success of these 13 senators is the Koch independent spending operation.

Two super PACs that were founded and are heavily funded by Koch Industries and wealthy individuals in the Koch donor network have spent close to $15 million boosting the campaigns of five senators who will attempt to lay waste to the U.S. electoral system this week.

According to data compiled by the Center for Responsive Politics, Americans for Prosperity Action (AFP Action), the super PAC affiliate of Koch's top political group, spent $11.9 million supporting Blackburn, Steve Daines of Montana, Hawley, and Roger Marshall of Kansas in the 2018 and 2020 elections. Marshall got the most support, as AFP Action spent over $3.2 million promoting him and more than $1.3 million against his Democratic opponent.

In the 2016 cycle, Freedom Partners Action Fund, the main Koch-backed super PAC at the time, dropped nearly $3 million into the Wisconsin Senate race to support Johnson and attack his liberal opponent, Russ Feingold. Thet action fund's nonprofit affiliate, the Freedom Partners Chamber of Commerce, now called the Stand Together Chamber of Commerce, was characterized by Politico as "the Koch brothers' secret bank."

If Perdue wins his tight race, he'll have the Koch network to thank. AFP Action has gone all-in on the content, spending at least $18.5 million on independent expenditures supporting him or attacking his opponent, Democrat Jon Ossoff.

Of the campaign and leadership PAC donation total, Koch PAC has given $485,000, with the most going to Sen. Marsha Blackburn of Tennessee, whose campaigns have been bankrolled by Koch PAC since 2005. Close behind is Johnson, whose political committees have taken in $55,000 from Koch PAC, over $30,000 from Koch family members, and $36,500 from the PAC of Aegis Strategic, a Koch-backed political consulting firm created in 2013 to "help electable advocates of the freedom and opportunity agenda who will be forceful at both the policy and political levels."

Members of the Koch family have personally contributed to the campaigns of five senators: Blackburn, Cruz, Daines, Johnson, and Lankford. Chase Koch, the son of Koch Industries chairman and CEO, has doled out $28,600 to the five senators' campaigns, with the elder Koch adding $26,000 and his wife, Liz, giving $23,700.

Cruz is reportedly leading the Senate's effort to throw out millions of legal votes, but Koch favorite Hawley was the first senator to announce that he would object to the Electoral College certification back on Dec. 30.

Hawley's entry into politics and his election to the Senate would not have been possible without the help of Team Koch. His 2016 campaign for Missouri attorney general received significant help from a number Koch-tied organizations.

Aegis PAC backed twelve candidates in the 2016 election cycle, of which Hawley was one. Hawley's campaign received $24,800 in support from Aegis PAC for his attorney general run—most of which he kicked back to Aegis Strategic for data lists, phones, and fundraising fees and $20,000 from Koch Industries. In addition, the reports detail an $816 payment to Freedom Partners for an "event expense."

The now shuttered Aegis Strategic, founded "with the Kochs' blessing after an analysis concluded that their network's efforts in the run-up to the 2012 election suffered from flawed GOP candidates," was owned and managed by former Americans for Prosperity-Colorado state director Jeff Krank and staffed with Koch operatives.

Shortly after being sworn into office as AG, Hawley was courted by the Kochs to challenge incumbent Democratic Sen. Claire McCaskill in the 2018 election, making a trip to the Kochs winter donor summit that his spokesman said was for "campaign purposes." Then, a week after Hawley launched his Senate campaign, he huddled with Koch network donors again in New York City shortly after launching his campaign.

Tim Phillips, president of Americans for Prosperity (AFP), called Hawley "a bright young leader" at the donor summit. Michael Palmer, the president of i360, the Kochs' data analytics company, told summit attendees "that Missouri is among the network's top targets for 2018."

Just months before the 2018 midterms, Phillips launched AFP Action, of which Hawley was a major beneficiary.

Vice President Mike Pence, also deeply tied to the Kochs, personally called Hawley to urge him to run for the Senate in 2017.

Pence's chief of staff, Marc Short, a Koch operative and former president of Freedom Partners Chamber of Commerce, announced on Jan. 2 that the vice president "welcomes the efforts" of the House and Senate members who will attempt the coup.

While a dozen Republican senators and most of the House GOP caucus are eager to tear up the U.S. Constitution for partisan gain, some Republicans are not on the same page.

"By objecting to electoral slates, members are unavoidably asserting that Congress has the authority to overturn elections and overrule state and federal courts. Such objections set an exceptionally dangerous precedent, threatening to steal states' explicit constitutional responsibility for choosing the President and bestowing it instead on Congress. This is directly at odds with the Constitution's clear text and our core beliefs as Republicans."

Cruz's proposal for a commission to look into preposterous claims of voter fraud—claims that have been struck down by court after court in over 50 rulings—is "even more problematic" and could delay the inauguration for months.