82% of Koch Candidates Elected to Office 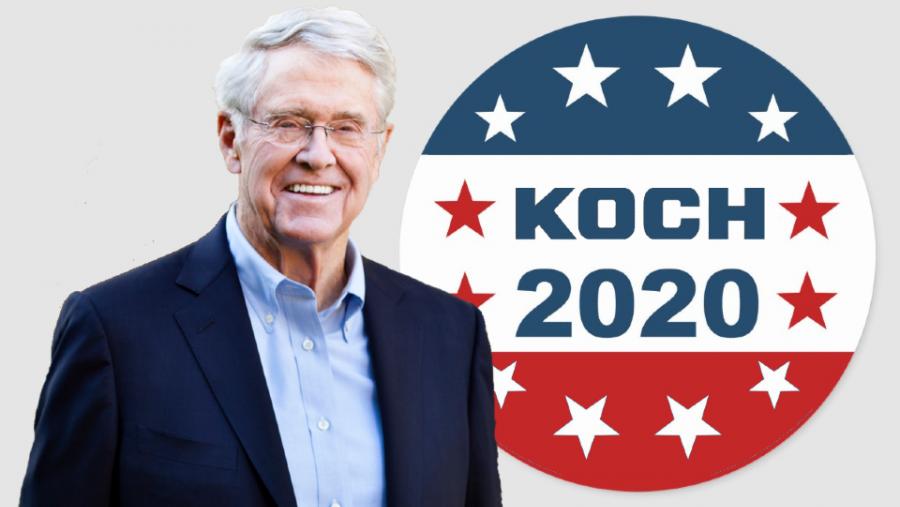 Charles Koch and his political network won at least 82 percent of the 439 candidates it invested in in the 2020 election cycle, according to an analysis of results by the Center for Media and Democracy (CMD). CMD compared national races called by the Associated Press and state election reporting sites with its 2020 Koch Candidates research to determine Koch's successes and failures.

Some races still have not been called as of publication and, therefore, were not included in the success rate.

The Koch political network did not announce how much cash it dedicated to the 2020 election cycle as it did in previous cycles, but Americans for Prosperity's (AFP) CEO Emily Seidel told CNN, "The reality is we've been strengthening our capabilities to go bigger than ever before." AFP is the Koch-funded astroturf operation organizing in 38 states that the group's president Tim Phillips told CSPAN employs "hundreds of staffers" and has "thousands of volunteers."

Team Koch did really well in getting its candidates for U.S. Senate and U.S. House elected. Fifteen of 19 Koch candidates for U.S. Senate won, with only John James (R) in Michigan and Sen. Cory Gardner (R) in Colorado losing outright. Two other Koch candidates in Georgia, Sen. David Perdue (R) and Sen. Kelly Loeffler (R), are headed for a January 5 run-off election because no candidates received more than 50 percent of the vote. With control of the Senate on the line, expect Koch to spend serious cash in what could be the most expensive races in the history of the Senate.

In the House, 129 Koch candidates out of 159 won their respective races, with 15 candidates joining Congress for the first time.

The Koch political network's investments in attorneys general and judges once again paid off big. Indiana's Republican candidate Todd Rokita won his race to replace the disgraced Curtis Hill (R), whose law license was suspended for 30 days by the Indiana Supreme Court in May after he was found guilty of groping multiple women at a 2018 party. West Virginia's Attorney General Patrick Morrisey (R) was also reelected.

Texas is very important to Koch. According to a 2016 report in the Houston Business Journal, "Texas has more Koch employees than any other state, 8,454, and there are 33,346 Texas jobs in total created by the Koch companies through direct, indirect and induced impacts."

Koch again ensured that he has eyes and ears on the Lonestar State's top regulatory body over the oil and gas industry with Jim Wright (R)'s win. Koch first supported the reelection of Commissioner Ryan Sitton (R), but moved to Wright when he defeated Sitton in the primary.

The Koch political network supported 73 state senate candidates in 17 states in 2020, with at least 59 winning their elections. Texas and Koch's home state of Kansas saw the largest number of Koch-backed candidates.

Team Koch contributed support to 169 candidates running in 19 state house races, 144 of which won their races as of publishing. The largest number of candidates supported were in the state of Texas, where the Koch network supported 44 candidates.

For the full list of Koch candidates in the 2020 election cycle with outcomes highlighted, go here.