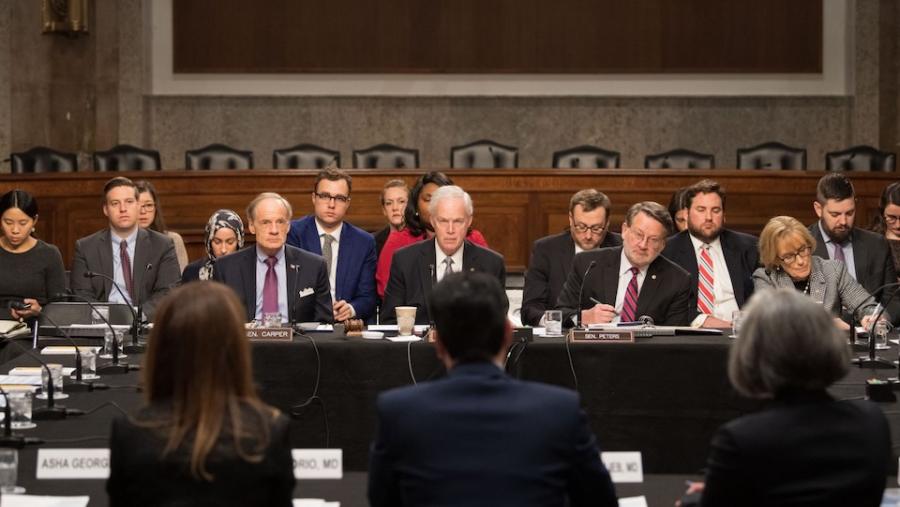 David Armiak, Research Director at the Center for Media and Democracy, david@prwatch.org

MADISON, Wis. – Nonprofit ethics watchdogs American Oversight and the Center for Media and Democracy today submitted a complaint to the Senate Select Committee on Ethics calling for an investigation into Senator Ron Johnson's abuse of his official position as chair of the Senate Homeland Security and Government Affairs Committee (HSGAC) to advance discredited, political attacks against former Vice President Joseph Biden.

"President Trump made it clear that he will entertain dirt on his opponents from foreign powers, but Senate rules prohibit Senator Johnson from following his corrupt lead," said Austin Evers, executive director of American Oversight. "We are watching the early stages of what could be a historic stain on the conscience of the Senate, but there is time to stop it if the Ethics Committee takes action."

"Our complaint makes a clear and compelling case that Senator Johnson violated the Senate Ethics Code," said Arn Pearson, executive director at the Center for Media and Democracy. "If Johnson's 'investigation' in coordination with state actors is allowed to move forward without consequence, it will set a dangerous precedent and further destabilize the foundation of our democracy."

The complaint outlines how Johnson's investigation into matters relating to Biden violates Senate rules and represents both an abuse of his position and misuse of official resources to promote debunked, political claims about the presumptive Democratic nominee and launder possible disinformation from foreign state actors.

Allegations concerning Biden's role in conducting U.S. policy towards Ukraine were raised during the impeachment proceedings against President Donald Trump and have already been discredited by the intelligence community and knowledgeable witnesses. Johnson himself in 2016 supported the very conduct that is alleged to have been corrupt, namely the conditioning of international aid on the dismissal of a corrupt Ukrainian prosecutor.

Even more concerning, Johnson appears to be using information provided or made publicly available by foreign individuals with known ties to Russia who have openly declared their intent to aid President Donald Trump's reelection effort. The complaint submitted by American Oversight and the Center for Media and Democracy cites multiple examples of actions taken by Johnson that referenced information released or shared by these individuals, including Andriy Derkach, a graduate of the KGB academy who was described in an August 7 statement from the Office of the Director of National Intelligence as "spreading claims about corruption… to undermine former Vice President Biden’s candidacy."

Federal law prohibits foreign nationals from financing activities to influence U.S. elections. To the extent that Johnson's investigation is serving to launder misinformation provided by Derkach and other foreign actors, it would violate multiple Senate rules and standards.

Senate rules prohibit senators from engaging in campaign activity using their official positions and resources. The Senate's code of ethics bars conduct that reflects "discredit" on the institution and the official standards of conduct require officeholders to put "loyalty to the highest moral principles and to country above loyalty to persons, party, or Government department."

Today's complaint requests that the Senate Ethics Committee investigate Johnson's deployment of his office and chairmanship for political ends and to determine the appropriate disciplinary action. The full complaint submitted to the committee is available here.