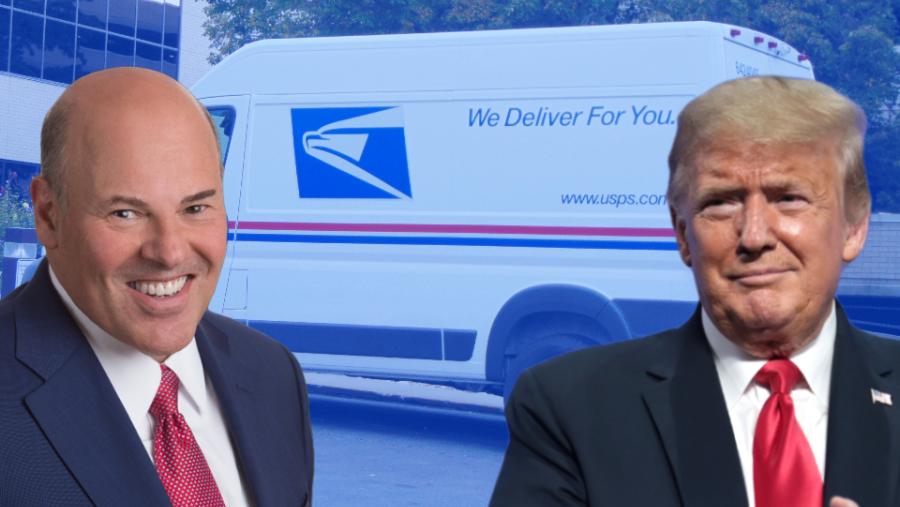 Megadonor Louis DeJoy, who has donated more than $4.5 million to bankroll Republican campaigns and currently serves as the finance chair for the Republican National Convention, has been installed as the new Postmaster General for the U.S. Postal Service in a move that could have serious consequences for the outcome of the 2020 elections.

Over decades, the Greensboro, North Carolina-based multimillionaire and former businessman and his wife, Aldona Wos, became one of the Republican Party's most faithful megadonor couples. This partisan generosity has come with great reward. George W. Bush gave the Estonia ambassadorship to Wos, North Carolina governor Pat McCrory put Wos in charge of the state's Health and Human Services department, and President Donald Trump made Wos the vice chair of the President's Commission on White House Fellowships. Most recently, in February 2020, Trump nominated Wos for the Canadian ambassador post.

DeJoy and Wos have combined to donate nearly $4.6 million to federal candidates, PACs, and party committees since 1984. This includes $1.8 million to the Republican National Committee (RNC) and $1.3 million to Trump Victory, the joint fundraising committee of the Trump campaign and the RNC, according to a CMD review of Federal Election Commission records. The couple has given $18,900 directly to Trump's two presidential campaigns, and DeJoy donated $25,000 to the super PAC American Crossroads in 2016, when it bought ads attacking Hillary Clinton.

Because of DeJoy's hefty donations, the GOP made him finance chair of this year's Republican National Convention, and Trump tapped DeJoy to lead the ailing U.S. Postal Service, which is undergoing critical financial woes, amplified by the coronavirus. Republican lawmakers have refused to provide it with ample funding and pandemic relief.

The Postal Service has been in a financial crisis since 2006, when a Republican Congress passed a bill requiring the service to create a $72 billion fund to pay retiree's health care costs for more than 50 years into the future. The requirement, which aided the agenda of those who want to privatize the service, led the Postal Service to make steep budget cuts.

A top GOP donor—someone whose partisan donations have changed the course of his and his wife's lives, elevating them into the upper echelons of conservative political circles—running the Postal Service creates the potential for large-scale manipulation of the service for electoral gain and may make the privatization of the service more likely.

Slowing Down the Mail

States have massively expanded vote-by-mail programs in response to dangers posed by the in-person spread of the coronavirus, which is currently raging across the South and West and creeping ominously into the Midwest. At the same time, Trump, voter suppression groups such as True the Vote, and even the two Republican members of the Election Assistance Commission are stoking fear, without evidence, about alleged voter fraud around mail-in ballots.

In late April, the vice chair of the USPS Board of Governors resigned, reportedly in protest of the Trump administration's efforts to leverage an approved loan to make changes to the service. Soon after, Deputy Postmaster General Ronald Stroman was reportedly forced out of the agency. Stroman was "specifically key on elections and vote by mail."

Since becoming Postmaster General in mid-June, DeJoy has already taken actions to slow mail delivery down, even as the Postal Service's revenue was unexpectedly high in this year's second quarter and the Treasury recently made billions of dollars in loans available to the service.

The Treasury made up to $10 billion in loans available to the Postal Service last week, but the service reportedly does not need to borrow at this time. Mail volume has surged during coronavirus-related lockdowns, and the service saw an $18 billion jump in revenue in the second-quarter of this year versus the 2019 second quarter due to increased package volumes.

But DeJoy, eager to cut costs, eliminated overtime for the Postal Service, according to documents that the Associated Press obtained in July. DeJoy wrote in the documents that if distributions run late, centers will keep the mail "for the next day," and that "we may see mail left behind or mail on the workroom floor or docks."

As DeJoy slows down the Postal Service, the Republican National Committee is using $114,500 of DeJoy's money, along with millions more from numerous GOP billionaires and multimillionaires, to sue states that have passed laws to expand mail-in voting, according to Sludge. GOP benefactors helped give the RNC's legal proceedings account a $23 million budget to block vote-by-mail proposals in some states and fight enacted policies in others. Many of these states are swing states that could determine the result of the presidential contest.

House Democrats' HEROES Act, passed in mid-May, provides $25 billion in emergency funding for the Postal Service, but the Senate has not taken up the bill. Senate Majority Leader McConnell's parallel proposal does not include funds for the Postal Service. House and Senate leaders and the White House are currently negotiating on a new relief bill, possibly the final stimulus before the November elections. Politico Playbook reported on August 5 that House Speaker Nancy Pelosi and Senate Minority Leader Chuck Schumer agreed to a compromise amount of $10 billion for the Postal Service in negotiations, subject to a meeting with DeJoy that day.

The HEROES Act also provides $3.6 billion worth of much-needed elections funding, but Trump and GOP have not proposed such help.

With a poorly functioning Postal Service, a Republican campaign against vote-by-mail, and a lack of election funding in the states, all during a deadly pandemic, the November elections are likely to disenfranchise millions of voters.

In addition to showering GOP politicians and party committees with millions of dollars, DeJoy and Wos have also donated to right-wing nonprofits in the influence network of billionaire industrialist Charles Koch. Koch and his network have been attempting to privatize the Postal Service since the 1970s.

The couple has a charity, the Louis DeJoy and Aldona Z. Wos Family Foundation, which had $41.2 million in net assets and paid out over $1.4 million in grants in 2018. According to a CMD review of federal tax records, the foundation has donated to three members of the Koch-funded State Policy Network, a coalition of state-based think tanks focused on right-wing priorities such as cutting taxes and gutting environmental regulations.

The DeJoy and Wos Family Foundation contributed $17,000 to The Jesse Helms Center Foundation from 2015-2018 and $7,500 to the Ashbrook Center, a GOP-tied nonprofit that's part of Ohio's Ashland University and has received grants from the Charles Koch Foundation, from 2017-2018.

Feature image is adapted from Wikimedia Commons and Gage Skidmore.