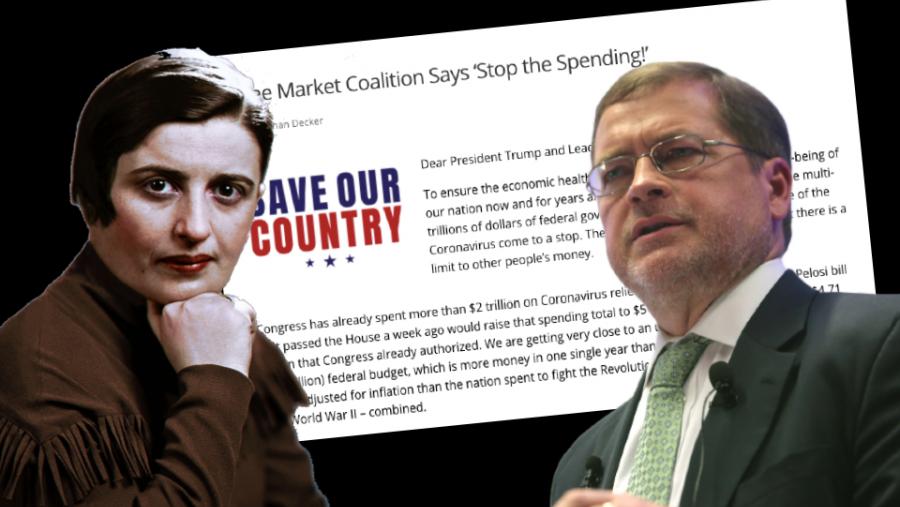 At least five right-wing, free market organizations and two hate groups that have actively pressured Congress to refrain from bailing out state and local governments facing enormous budget deficits because of the the coronavirus pandemic have taken up to $5.4 million in Paycheck Protection Program (PPP) forgivable loans, an investigation by the Center for Media and Democracy (CMD) finds.

More than a dozen similar groups with a mission to drastically reduce the size and power of the federal government also received PPP loans worth millions more, CMD reported.

Meanwhile, state and local governments are desperate. They furloughed 1.5 million workers in April and May. Ohio cut $775 million from its budget in May, including $210 million from Medicaid and $355 million from education programs. Dayton Mayor Nan Whaley said that Basic city services will face "drastic" cuts without federal aid.

"It's a scandal that small and immigrant-owned businesses continue to struggle while big money corporatists gobble up the government support they claim impinges on the market," Zephyr Teachout, a Fordham University School of Law professor and a leading expert on antitrust law and political corruption, told CMD. "We need to break up corrupt corporate monopolies now and aggressively call out the front groups that prop them up."

“Think about this,” urges Duke University history professor and author Nancy MacLean. “How can organizations that have worked to cripple effective government action on matters of broad popular support—including safeguarding public health in the COVID crisis—take our tax dollars when it comes to continuing their operations? What’s wrong with this picture?”

Officials from two think tanks signed a May 12 letter opposing a federal bailout coordinated by the American Legislative Exchange Council (ALEC), a pay-to-play operation that brings together state legislators and business representatives to craft model legislation.

Thomas Schatz, president of Citizens Against Government Waste, Charlie Copeland, president of the Intercollegiate Studies Institute, and the other signers "believe the idea of the federal government "bailing out" the states would be harmful to taxpayers, federalism, and ultimately the states themselves," says the letter. Helping state and local governments meet basic budget obligations would mean "rewarding states that have made poor financial decisions at the expense of those that have been fiscally responsible," it continues.

Despite frequently attacking the CARES Act, which established the PPP, Citizens Against Government Waste applied for and received between $150,000 and $350,000 from Truist Bank in April to preserve 17 jobs.

In a blog post critical of the CARES Act, Vice President of Policy and Government Affairs Debrah Collier writes, "Small business loans and grants from the government should be reserved solely for the millions of genuine small businesses across the country who are struggling to survive."

At the end of 2018, Citizens Against Government Waste, which has received funding from lobbying groups such as the Motion Picture Association and Pharmaceutical Research and Manufacturers of America, owned $4.3 million in assets. It paid Schatz $361,000 and spent $327,000 on lobbying that year, the most recent year for which records are available

The group defended its receipt of taxpayer funds by saying it chose a federal bailout instead of laying off staff who would then qualify for unemployment benefits that were expanded under the CARES Act, something the group also opposes. Citizens Against Government Waste's "Mission" page still claims it does not accept government funds.

Among the groups receiving PPP funds whose leaders have publicly fought state and local bailouts are three members of the State Policy Network (SPN), a web of right-wing think tanks funded by billionaire libertarians like Charles Koch that work with allied political groups to craft and advocate small-government policies, and two nonprofits considered hate groups by the Southern Poverty Law Center.

Top officials from SPN members the First Liberty Institute, the Intercollegiate Studies Institute, and the Leadership Institute all signed a letter put together by an arm of the Council for National Policy (CNP) that argues many states have been fiscally irresponsible. "A federally funded state bailout would reward the reckless states while punishing the prudent ones," claims the letter.

The Intercollegiate Studies Institute and the Leadership Institute have both received funding from Koch and from DonorsTrust, a donation conduit used by Koch and other right-wing billionaires to channel charitable contributions.

Also signing the CNP letter were Frank Gaffney, executive chairman of the anti-Muslim hate group the Center for Security Policy, and Mat Staver, founder of the anti-LGBTQ hate group Liberty Counsel. These were part of six organizations considered hate groups by the SPLC that received as much as $5.7 million in PPP loans, as CMD recently reported.

The foundation arm of SPN member Americans for Tax Reform, the project of anti-tax crusader Grover Norquist, received between $150,000 and $350,000 in PPP funding from PNC Bank in late April. Facing questions from the media, Americans for Tax Reform posted a statement on its website, saying that the PPP loan was "compensation for a government taking during the shutdown."

Norquist is famous for opposing all new taxes and saying he wanted to "reduce [government] to the size where I can drag it into the bathroom and drown it in the bathtub."

Norquist signed a June letter from Save Our Country, a right-wing coalition co-founded by Stephen Moore of the Heritage Foundation and FreedomWorks, that criticizes state and local bailouts as well as expanded unemployment benefits.

"Government spending—and policies such as paying millions of workers more money to stay unemployed than to go back to work, and paying states more money to enable them to stay shut down—is inhibiting the fast recovery we want in jobs and incomes, not stimulating it," it states.

Additional SPN members, many funded by the Charles Koch Foundation (CKF) and the Charles Koch Institute, received PPP loans in April and early May. In all, CMD found 18 members that benefited from the taxpayer-funded bailouts worth as much as $12.2 million.

SPN member the Lincoln Network even sued PNC Bank for alleged loan discrimination. Less than two weeks later, the bank granted Lincoln Network a PPP loan worth between $150,000 and $350,000.

The Ayn Rand Institute, which received $50,000 from CKF in 2018, scored a PPP loan worth between $350,000 and $1 million from Truist Bank on April 30. Named after a libertarian idol, the institute defiantly defended its decision to apply for and accept government funding.

"It would be a terrible injustice for pro-capitalists to step aside and leave the funds to those indifferent or actively hostile to capitalism," reads an explanation posted to the institute's website. "If ARI gets government relief money, it will be, for us, partial restitution for government-inflicted losses."

Right-wing news operation The Daily Caller and its heavily Koch-funded nonprofit Daily Caller News Foundation both got PPP loans. From 2014 to 2018, CKF and the Charles Koch Institute combined to donate over $3.4 million to the news foundation. In 2016, the Koch foundations provided 84 percent of its revenue.

The anti-green energy Institute for Energy Research, the Barry Goldwater Institute for Public Policy Research, the Freedom Foundation, and Taxpayers for Common Sense, all partially funded by Koch, scored PPP loans as well. On July 7, the Arizona Secretary of State's office found that the Goldwater Institute, named after arch conservative senator and 1964 Republican presidential nominee Barry Goldwater, improperly lobbied without registering to do so.

In all, at least 15 Koch-funded groups received PPP funds worth as much as $10.5 million.

Koch's flagship political advocacy group, Americans for Prosperity, has been campaigning against state and local bailouts for months. It recently launched a six-figure digital ad buy urging senators to block such provisions in the next relief bill.