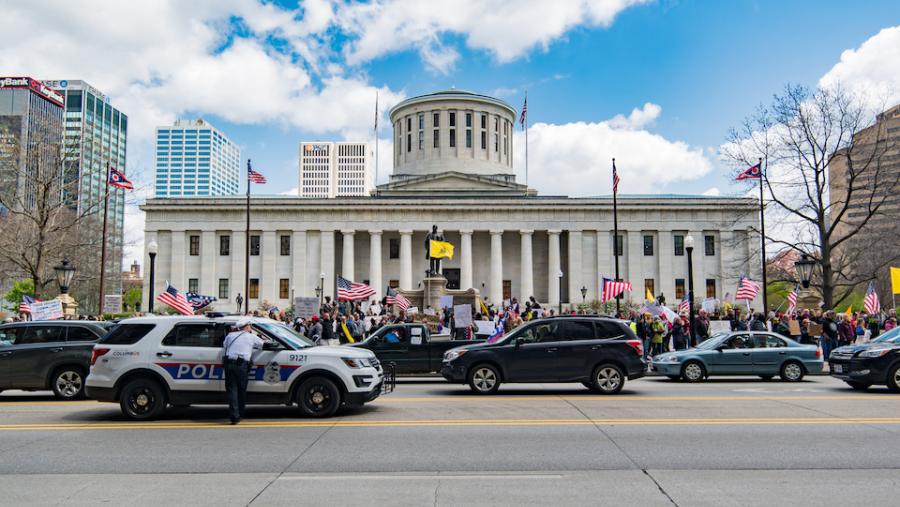 A rally to reopen Ohio will be held for the second week on the Statehouse grounds in Columbus on Saturday, April 25 calling on Governor Mike DeWine (R) and lawmakers to lift Ohio's Stay at Home order and reopen businesses in the state.

"The purpose of this rally is to defend the Bill of Rights for every Ohioan against state government overreach, and to let the Governor and other officials know we demand our rights to work again, go to church again, to live again," OON states.

Rally goers are encouraged to surround the Statehouse in their cars or to occupy the grounds, and to "take personal responsibility for your safety and health." However, there are no recommendations to maintain social distancing or to wear face masks.

Speakers will begin at 1:00 p.m., and former football coach and Christian Right activist Dave Daubenmire is confirmed to speak.

FreedomWorks, a self-described "grassroots service center" created in July 2004, which was instrumental in launching the Tea Party movement in 2009, is promoting the event and 17 similar actions on its "Reopen America" page. FreedomWorks is an offshoot of Citizens for a Sound Economy, which was co-founded by David Koch, now deceased.  Charles is not active in the group.

FreedomWorks is working to ignite "an activist base of thousands of supporters across the nation to back up the effort," by publicizing protests and holding virtual townhalls.

The protest this weekend follows a series of protests that MAGA Ohio Family Trump Day's John Witwer takes credit for organizing over the last week. The rallies attracted national attention, in particular, for an antisemitic sign that was spotted and widely reported on.

Whitwer claims in a Facebook video that, "the Proud Boys kicked those punks out," and that the rally was not antisemitic or about white power, and that there was "nothing but love."

The Southern Poverty Law Center describes the Proud Boys as a hate group that is "known for anti-Muslim and misogynistic rhetoric."

OLC President John McAvoy is also on the board of the Northwest Ohio Conservative Coalition, who opposed Governor DeWine and endorsed the Libertarian candidate in the 2018 election. McAvory also leads the Toledo Tea Party.

Other hosts of the rally are Free Ohio Now, a new group founded by Kirstin Hill, the podcast The Daily Update, and, most recently, Totally Engaged Americans, a Tea Party group based in Lorain County.

Christopher Dorr, a right-wing gun-rights activist, set up a Facebook page as part of an effort by his family to push anti-quarantine protests, The Washington Post reported. That group, Ohioans Against Excessive Quarantine, is not affiliated with the Saturday rally.

Convention of States Action links to a group called ReOpen Ohio on its "Open the States" project page, but that group is also unaffiliated with Saturday's protest event. Convention of States Action is a project of Citizens for Self-Governance, a group founded by Eric O'Keefe and Mark Meckler, to push for a constitutional convention for the purpose of adopting constitutional amendments to severely restrict federal power.

Saturday's Open Ohio Now rally will be livestreamed on its Facebook page.