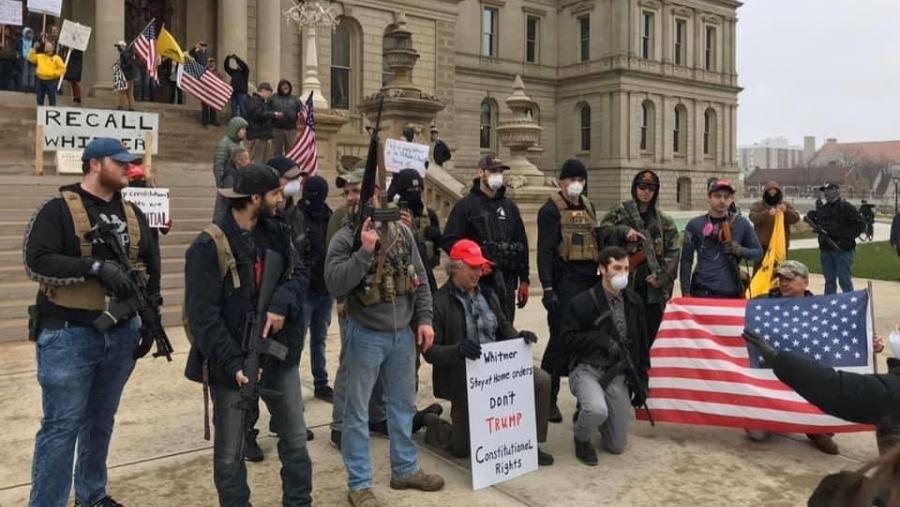 The protest was organized by the DeVos-funded nonprofit Michigan Freedom Fund (MFF) and a far-right organization called the Michigan Conservative Coalition.

Just one day earlier, Whitmer had thanked Amway and the DeVos family, which owns the company, for donating personal protective equipment (PPE) to state hospitals. "Amway has really stepped up to help keep Kent County families and health care workers safe during this time," Whitmer said. The day before that, Whitmer called out the DeVoses for funding MFF as it promoted the protest.

Despite Michigan having the fourth-highest number of confirmed coronavirus cases in the country, along with nearly 2,000 deaths, MFF calls into question the data and science that have informed Whitmer’s decisions and argues that she should reopen the state’s economy. The campaign against Whitmer has been especially harsh and sometimes personal. Some protesters chanted, "Lock her up!" as they approached the Capitol on Wednesday.

The DeVoses fought Whitmer in 2018, donating large sums to the Republican Governors Association, which spent over $6 million against her.

A DeVos spokesperson claimed the family did not sponsor the protest, and MFF's executive director disputed that the family financed it as well, claiming that MFF spent no money. The Detroit Free Press points out that the group paid for two Facebook ads that took users to the Facebook event page of the protest, which the groups set up and called "Operation Gridlock." MFF claimed the ads cost $250. The April ads were the group's first since last December. In addition, MFF's paid staff presumably spent time on the job coordinating the media operation. An administrator of the MFF Facebook page posted a live video and photos of the protest.

MFF is a 501(c)(4) nonprofit, so it does not publicly disclose its donors. But its affiliated political action committee, the Michigan Freedom Network (MFN), does. From 2017-19, MFN has been almost entirely financed by members of the DeVos family, according to state campaign finance records. Several DeVos family members combined to give the group $255,000, or 98 percent of the MFN's contribution revenue during that time.

Another roughly $3,900 came from the PAC arm of the Great Lakes Education Project (GLEP), a trio of nonprofits that the DeVoses created in 2001 to advance school privatization by funding other nonprofit groups and state lawmakers' campaigns. GLEP has spent millions of dollars from the DeVoses "essentially buying policy outcomes that have helped Michigan’s charter industry grow while shielding it from accountability," according to The Washington Post.

GLEP's PAC reimbursed MFN for "shared staff time" in December 2019, indicating that the two groups have overlapping employees. Like MFN, the GLEP PAC appears to be almost entirely funded by the DeVoses.

Greg McNeilly, a business associate of Betsy DeVos's husband, Dick DeVos, and a former spokesperson for the family, is chairman of MFF. The group has in the past campaigned for anti-union "Right to Work" laws. The fund lobbies the state, having spent nearly $16,000 on lobbying in 2019.

MFF is attempting to profit from the political unrest it helped create by asking its Facebook followers to "send Governor Whitmer a message" by purchasing its "Freedom Is Essential" T-shirts.

The Michigan Conservative Coalition, which organized the protest with MFF, is a far-right conservative group that posted an image of Donald Trump holding a baby Pepe the Frog, a meme popularized by the racist "alt-right," on its Facebook page in 2016. The next year, the group posted an image that mocked the idea of white privilege, writing, "Race-based privilege is another liberal scam to beat you down so you are more easy to control!" 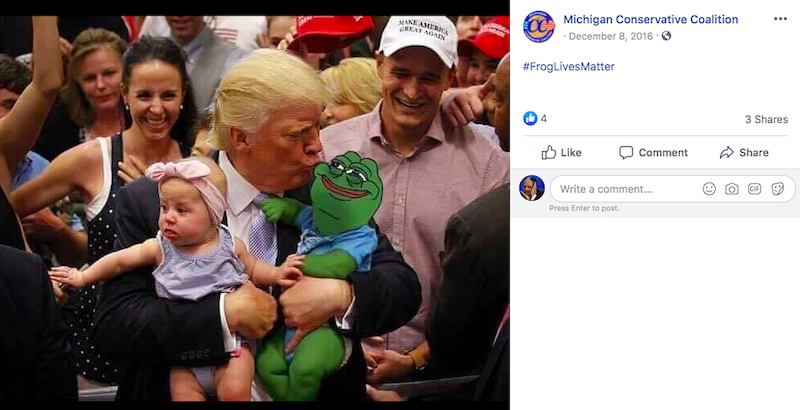 The protest, which drew more than 3,000 people, attracted an even more extreme group, the Proud Boys, a violent gang that the Southern Poverty Law Center identifies as a "general hate group." At the protest, Proud Boys members allegedly blocked the entrance to a Lansing hospital. "A doctor came out of the hospital to plead with them to let the ambulances through," tweeted Chad Loder, founder of Masks for Docs, a volunteer group that collects protective equipment for medical professionals.

The city's public transit system was temporarily disrupted by Operation Gridlock on Wednesday afternoon. "CATA is unable to accommodate life-sustaining and medically necessary trips to or from these areas," it tweeted.

Several protesters flew Confederate flags, including one that included a superimposed image of an assault rifle. According to the Michigan Advance, the protest turned into a "Trump celebration with Confederate flags and guns." Some protesters sported Nazi swastika tattoos.

The Michigan Militia, an extremist group with racist ties, also attended with their firearms. Members attended the Unite the Right rally in Charlottesville, Virginia in 2017, and Oklahoma city terrorist and white nationalist Timothy McVeigh attended Michigan Militia meetings in the 1990s.

Many of the protesters disobeyed city guidance and left their cars to congregate on the streets and the Capitol lawn. Most didn’t wear face masks and did not stand six feet apart, according to the Michigan Advance.

Actions in Other States

Meanwhile, Kentucky Republican lawmakers overturned the governor's veto of a bill requiring voters to show a government-issued photo ID yesterday at a time when the ID-issuing offices are closed due to COVID-19.

On Monday, a similar protest took place at the Ohio Statehouse as some Republican state lawmakers called on GOP Gov. Mike DeWine to cancel coronavirus-related restrictions in May. Protesters were photographed standing very close together and not wearing masks.

Conservative groups including Ohio Stands United organized the protest and are planning more for Friday, Saturday, and next Monday. The Facebook event page calls on participants to fly the Gadsen flag, which the right-wing Tea Party re-popularized. Tea Party groups, a pro-gun group, and a group called "MAGA Ohio Family Trump Day" are helping organize the events. Ohio Stands United, which claims to have dozens of local chapters and 58,000 members, has been involved in efforts against gun control.

Protesters rallied on Tuesday against Democratic North Carolina Gov. Roy Cooper, who has imposed coronavirus-related restrictions on his state. Private Facebook group ReopenNC organized the event. Police arrested one participant as protesters said "they doubt the extent of the virus' danger, describing testing as inaccurate and causes of death suspicious," according to the Raleigh News & Observer. Reopen NC plans to hold weekly protests until Cooper lifts his stay-at-home order.

Another private Facebook group, Reopen Virginia, is "a hive of conspiracy theories and anti-government sentiment," according to extremism reporter Jared Holt.

Deranged Donnie, Cruella DeVos, and their Trumpettes demand the right to spread the virus throughout every town in America -- welcome to the true Zombie Apocalypse.
This is the most ludicrous article I've seen on the protest. There was no hate, it wasnt a Trump rally, there may have been one, One confederate flag. Almost all of the over 20000 people stayed in their car.
There was no hate There was no rally There was One confederate flag People stayed in their cars Therefore, this is a most ludicrous article I’ve seen on a protest
Where are the swastikas? Where on the long-sleeved men did you spot any tattoos? Where are they? Was there a picture from that rally? Did any news outlet get video of nazi protesters? Did you make something up that you don't have evidence for? Remember when G.W. Bush said "You are either with us, or you are with the terrorists..." There are whole swaths of the country right now saying "Well...I'm certainly not with you." Articles like these will just drive divisions even deeper. People who never thought about joining a militia will reconsider after reading articles like these.
I think ALL Protestors should sign a DNR so that when NOT if but WHEN those Protestors get the Coronavirus don't waste the time of ALL the BRAVE people fighting for the lives of those that deserve being fought for. Unlike the cowardly Protestors that wave guns, hold up hanging looses, wave surpremist signs , your only promoting hate while hiding behind wanting to re-open businesses.