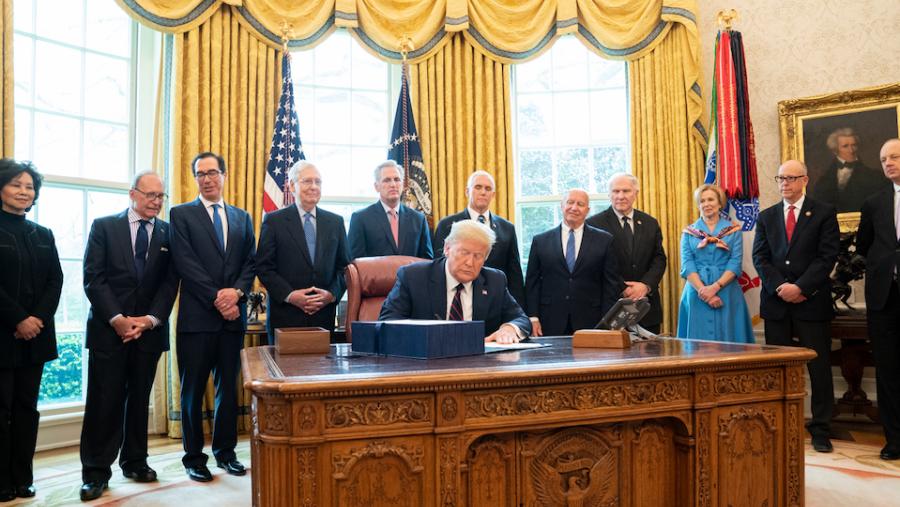 Right-wing groups were surprised to learn that Democrats inserted a provision in the $2 trillion federal stimulus bill enacted last month that helps labor unions. The measure requires businesses with between 500 and 10,000 employees that take a government loan under the Coronavirus Aid, Relief and Economic Security Act (CARES Act) to "make a good faith effort to remain neutral" when a union tries to organize their workers for the duration of the loan's repayment period.

The provision could "have an impact on a fair number of organizing campaigns," give unions new organizing targets, and boost membership, said Wilma Liebman, a Rutgers University professor and former National Labor Relations Board chair under President Obama.

The CARES Act provision allows workers at companies bailed out by taxpayers to organize unions without employers conducting opposition campaigns. Opposition campaigns by corporations can include telling workers that the company opposes unionization, denying non-employee union organizers access to the workplace, or frightening workers with the threat of permanent replacement if they strike.

"This section of the CARES Act has nothing to do with the current COVID-19 coronavirus outbreak and is simply a handout to unions," wrote the Mackinac Center for Public Policy, saying it would "mean that employers would have to effectively agree to a gag order after weathering the current crisis."

"It's shameful that union officials and their political allies in Congress would use a legislative response to a global health crisis as a way to promote Big Labor's agenda," the groups complained in their LaborPains blog.

With only six percent of private sectors currently belonging to a union, half of what it was 20 years ago, "Big Labor" is no longer so big, and unions rely heavily on neutrality agreements and the "card check" method of organizing to build their membership.

The U.S. Treasury Department has yet to provide guidance to employers as to what is meant by the law's language of "good faith effort to remain neutral."