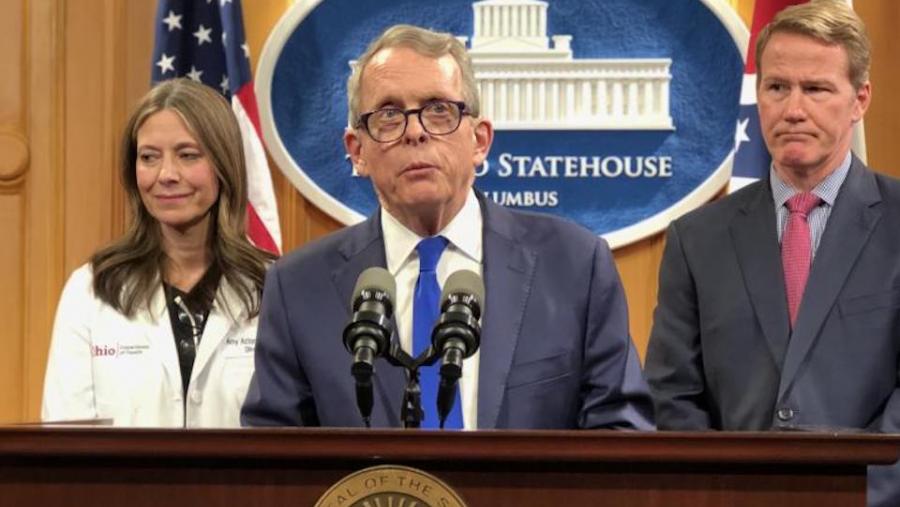 The coronavirus pandemic has laid bare the folly of the Koch network's assaults on affordable and accessible health care for low-income Americans. One of the hallmarks of that assault has been to lobby nationally and in the states for work rule requirements in order to receive Medicaid, as well as food stamps and other social welfare benefits.

After Ohio Medicaid applications grew by 4 percent in one week, DeWine wrote to the Trump administration, "We urge you to loosen the requirements for these programs in order to provide much-needed assistance to Ohio without delay," speaking also of work requirements for food stamps and Temporary Assistance to Needy Families (TANF).

Even the Buckeye Institute, the major Koch-funded right-wing policy group in the state, has supported the governor on this action, despite campaigning for the work requirements.

Just between Sunday and Wednesday of last week, 111,000 Ohioans applied for unemployment benefits, and it is obvious that a person cannot meet work rule requirements if businesses have been shut down to slow the spread of COVID-19.

"Even though we don't have the legal mandate to do it, it’s kind of crazy to expect somebody to come to (the county) agency to meet their 20-hour requirement" for work or job training "in order to get a public benefit," said Joel Potts with the Ohio Job and Family Services Directors' Association.

Neither DeWine nor Buckeye say how the uninsured - those not on Medicaid or private insurance - will get coverage for coronavirus treatment. The U.S. House stimulus bill, introduced by Speaker Nancy Pelosi (D) on Tuesday, includes language on providing treatment to the uninsured, covering vaccines, emergency care, ventilators and any other necessary health services.  (See, for one example, page 276 of the House bill.) The U.S. Senate reached an agreement on a $2 trillion stimulus package early Wednesday morning but the bill's text has not yet been released.

Americans for Prosperity (AFP), founded by the Koch brothers to run the ground game on their political agenda, fought to get the Trump administration to allow states to impose a work requirement for Medicaid. The U.S. Department of Health and Human Services (HHS) has approved such requirements in ten states so far (Arkansas, Arizona, Indiana, Kentucky, Michigan, New Hampshire, Ohio, South Carolina, Utah, and Wisconsin).

However, the Koch network suffered a setback in February when a federal appeals court upheld a lower court decision that blocked Arkansas's first-in-the-nation work rule requirement for Medicaid. The three-judge panel concluded that Trump's HHS Secretary Alex Azar failed to consider how the requirement "would promote the primary objective of Medicaid - to furnish medical assistance."

The ruling struck down Kentucky's work requirement as well, but the state's newly elected Democratic governor already rescinded them in December. Work requirements have also been set aside in Michigan and New Hampshire by other lower court decisions.

Efforts are being made to provide health care and food security for low-income people during the pandemic, whether it be through the U.S. House's stimulus bill, the Senate's coronavirus bill, or action by Republican governors, and it appears that even Koch-funded groups have to reluctantly go along.