Independent Spending for Biden and Warren Dwarfs Outside Support for Sanders 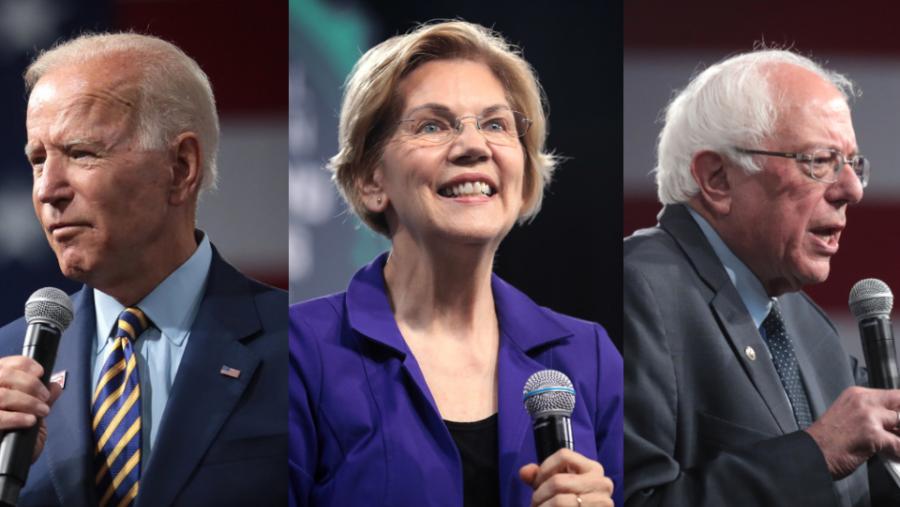 As of March 4, the day after Super Tuesday, independent spending groups in the Democratic presidential primary had poured money into ads supporting candidates Joe Biden and Sen. Elizabeth Warren (D-MA). While their top opponent, Bernie Sanders (D-VT), has the backing of numerous outside groups, the groups' spending to support him is a small fraction of the spending by pro-Biden and pro-Warren groups.

A Center for Media and Democracy (CMD) review of Federal Election Commission data finds that Warren benefited from $15 million worth of independent spending in her favor, and Biden was buoyed by over $9.2 million in positive outside spending. Biden has faced over $1 million of spending in opposition to his candidacy, while anti-Warren spending totals just $19,000.

In contrast, outside spending for Sanders totals roughly $1.2 million, and independent groups have spent close to $6.2 million against him.

Warren campaigned on refusing help from super PACs. In the New Hampshire debate, she called out Sanders and the other contenders except for Sen. Amy Klobuchar (D-MN), who dropped out of the race on March 2 and endorsed Biden, for either being multibillionaires or benefiting from big-money super PAC spending.

I hear everyone talking about how we all want to overturn Citizens United because we want to end unlimited spending. Everyone on this stage except Amy and me is a billionaire or receiving help from Super PACs. Time to put your money where your mouth is. #DemDebate

On Feb. 28, the Warren campaign reportedly asked Persist PAC to disclose its donors, but the PAC's spokesperson said it would not reveal the contributors until federally required on March 20. Meanwhile, millions of voters will have cast their ballots.

Last October, Biden similarly reversed his campaign promise to reject help from super PACs after poor fundraising in the third quarter of 2019.

Here is a rundown of the independent spending for and against the remaining candidates in the Democratic presidential race.

Most of the money supporting Warren comes from Persist PAC. Emily's List is the only known donor, having given $250,000, as well as $250,000 to the pro-Klobuchar Kitchen Table Conversations PAC. Persist PAC put nearly all of the $14,812,211 it has spent towards media ad buys in Nevada, South Carolina, and Super Tuesday states, with small amounts also spent on web design and ad production.

New Florida Majority, an organization that works to increase the voting and political power of marginalized communities, has spent $113,000 backing Warren, and conservative groups such as The Committee to Defend the President and Great America PAC have each spent four-figure amounts opposing her.

The super PAC spending does not appear to have dramatically helped Warren, who, as of this writing, did not get better than third place in any Super Tuesday state.

Unite the Country has spent $9 million on pro-Biden ads and direct mail. The International Association of Firefighters union, which endorsed Biden in April 2019, has spent $196,000 on mostly digital advertising.

Groups spending against Biden include The Committee to Defend the President ($894,000 spent); Club for Growth Action, the super PAC arm of conservative political nonprofit Club for Growth ($67,000); and Dream Defenders Fight PAC, which is backing Sanders ($2,400).

Forty-eight independent spenders have made expenditures for or against Sanders. While most of the outside spending addressing Biden and Warren has been in support of those candidates, the majority of the independent spending regarding Sanders has opposed him.

The Big Tent Project Fund, which recently formed as has yet to disclose its donors, has already dropped over $4.6 million, mostly on digital advertising, against Sanders.

Democratic Majority for Israel, a close ally of the conservative AIPAC, spent $1.4 million via its DMFI PAC against Sanders in Iowa and Nevada. Its biggest donors include an oil and gas CEO and several finance executives.

Club for Growth Action spent $59,000 against Sanders, while the Republican Jewish Coalition made $69,000 worth of anti-Sanders expenditures. Sanders is Jewish, supports Palestinian rights, and would be the first-ever Jewish president, should he win the general election.

The centrist group Third Way attacked Sanders in Iowa but did not file any expenditure reports with the Federal Election Commission.

Many of the pro-Sanders groups have spent relatively small amounts, most of it going towards canvassing, phonebanking, text messaging, and other get-out-the-vote efforts backing Sanders. Grassroots groups that are members of the People Power for Bernie coalition have affiliated super PACs that have spent modest amounts to boost Sanders. The top spenders from this group are People’s Action ($102,000), the Center for Popular Democracy’s PAC ($97,000), the environmental activist group Sunrise Movement’s PAC ($89,000), and Democratic Socialists of America’s PAC ($61,000 spent).

The nonprofit Our Revolution, which is part of People Power for Bernie and said it is encouraging its members to vote in primaries, has not filed any spending reports with the Federal Election Commission. The Intercept recently reported that, according to the group, it received only six donations of over $5,000 in 2019, and none over $25,000.

Our Revolution's claims cannot be independently verified until November, when the group's 2019 tax return is due. In 2018, the group received multiple six-figure donations.

Pete Buttigieg, who left the race on March 1 and endorsed Biden, got multiple millions of dollars worth of outside support from the hybrid PAC/super PAC VoteVets. Michael Bloomberg, who had a poor showing on Super Tuesday and dropped out of the contest on March 4, also endorsing Biden, had no need for super PACs. He spent more than $500 million of his own money on TV, radio, and digital ads.